Can commemorative music heal? And if so, whom?

The day after hearing Jonathan Dove’s brilliant talk, the first workshop in our Aural Commemoration strand, ‘Music and Memory’, took place on Saturday 28 April 2018 at Harris Manchester College. All three panellists, Peter Grant, Laura Hassler and Rihab Azar agreed that music and memory are intrinsically linked. The question remains, however, as to how and in what ways the two are interconnected.

Drawing on a number of musical references, Dr Peter Grant pointed out that many scholars have shown that the most valued outcome people place on listening to music is the remembrance of past events. If that is the case, it is not surprising that music accompanies most commemorative events. But what does this particular type of music tell us about how, what and who commemorates? For example, how does the British public remember the First World War, one hundred years after it ended? Focusing on this question, Grant suggested that music associated with official commemoration, represented for example by the BBC’s centenary project, often provides an overly simplified and monolithic narrative. This current oversentimental and mythologised approach to remembrance of the First World War fails to give the dead a contemporary voice in all its multifaceted complexity. ‘It is looking back, rather than forwards’, he maintains.

Laura Hassler, director of Musicians without Borders, reasoned that the power of music can be used to support processes of reconciliation and healing in the context of war. Hassler spoke about one project in particular, named Songs for Srebrenica. Srebrenica, the site of Europe’s worst massacre since the Second World War, is a very uncomfortable and painful memory for the inhabitants of the Netherlands, as Dutch soldiers failed to prevent the murder of 8,000 male Muslim Bosniak refugees who were under Dutch protection, confined in the United Nation’s ‘safe area’. The Songs for Srebrenica project addressed people living in the Netherlands as well as the female refugees who survived Srebrenica but lost their sons, husbands and fathers. As part of the Songs for Srebrenica project, Musicians without Borders have played and sung with and for the women, breaking down the barriers of social isolation and expressing solidarity through singing together.

Musician Rihab Azar reflected on Grant’s and Hassler’s line of reasoning and, giving examples from contemporary Syria, she asked what is the nature of each narrative embedded in public commemoration. In order for commemoration to lead toward reconciliation and healing, Azar contends, it needs to be an inclusive and democratic endeavour. Everyone should be allowed to take part in the process. Commemoration should be more than just a storytelling event. It needs to address sore wounds in order for them to finally heal. To bring communities together and reconcile animosities, commemoration must also involve expressions of regret and confessions of crimes that have been committed instead of just providing a glorified narrative of one’s heroic past.

You can watch the three panellists’ presentations – as well as an oud performance by Rihab Azar – via our podcast series page. 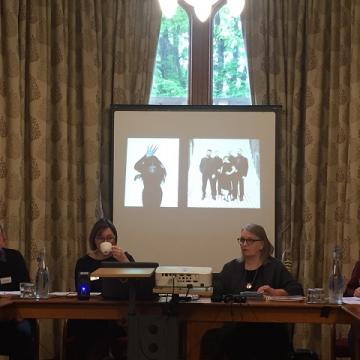