Spyridon Chairetis is a DPhil student in Modern Languages & Cultural Studies at the University of Oxford. His doctoral thesis examines queer potentialities and ambivalences in Greek TV comedy texts produced in the 1990s and 2000s. This blog post is an attempt to envision reruns as a cultural practice that accommodates queer readings and queer representational possibilities. Spyridon’s blog post is an extended version of a paper presented at the workshop ‘Private television in Greece: the case of Mega channel’ held at the University of Thessaloniki, Greece in May 2018.

On March 2018, Mega channel’s creative team launched a creative advertisement entitled ‘Mega series… speak’.[i] Thanks to well-known Greek actors (including Christophoros Papakaliatis, Pemi Zouni, and Antinoos Albanis) who agreed to lend their ‘voices’ to the advertisement, this one-minute project (re)introduced different generations of Greek spectators to some of the most famous television productions of Greece’s first private television channel. However, the advert was significantly more than a mere elegy on Mega’s rich cultural archive. Mega Channel has been facing closure since 2016 and operates without a license, broadcasting television shows reruns, mainly series, which paradoxically enough, achieve very high viewership within the Nielsen ratings system. Both the reruns and the advertisement appear to be not only an instrument of sociopolitical pressure, but also as an affective/effective communication strategy aiming to send the government and viewers a unified message: that Mega constitutes a body of older and more recent productions whose ‘life’ in the Greek television landscape still matters.

Discussions of the relationship between popular culture and the phenomenon of nostalgic retromania are not new (Reynold 2011). Among the various media scholars who have explored the connection between television and the cultural practice of reruns, Derek Kompare posits that ‘repetition is actually the primary structuring factor of commercial television’ (2005:xi). Much like its American counterpart, Greek television has traditionally recycled its output, particularly comedy series in the summer months, in order to “fill” the “gaps” in their programming (Kassaveti 2017). Both during and in the aftermath of the financial crisis, however, the (omni)presence of reruns on Greek television appears to have become the rule and not the exception.

In a highly technological, interconnected and converging media landscape, popular culture is thought to encompass, among other things, the most immediate, modern and contemporary aspects of our lives. Yet, what if the popular culture of a country remains completely fixated on its past? The transformation of Greek television into what Ioanna Vovou defines as a ‘stock of programs’ (2013:314), raises a number of vital questions about Greek television’s addiction, use and perhaps abuse, of its own history and archives. At the same time, however, this new cultural paradigm, bridging and mixing the past with the present, demonstrates the opportunities that television reruns afford queer scholars interested in interrogating established frameworks of knowledge production.

Whilst a variety of academic works have explored television through a queer lens, many academic voices (Avila-Saavedra 2009; Joyrich 2014) identify ideological conflicts between queer theory’s destabilizing potential on the one hand, and television’s status as an ordinary and mainstream medium on the other. The marriage of television and queer theory is an unhappy one.  Rather than envisioning this coupling as incompatible and inherently problematic, I contend that it is the very incompatibility of queer theory and television that gives this duo value. Considered in this manner, television, and particularly reruns, may perhaps be considered queer. My argument is speculative; however, as I will explain, it finds implicit support in other recent works on the queer potential of television’s cultural and industrial practices.

As mentioned earlier, reruns fill empty television time and try to make something out of nothing (Miller 2017). Due to their traditionally devalued role, reruns are not necessarily aired during specific days and hours; they are largely squeezed clumsily in-between other programs, cut short and re-aired, and thus, disrupting linear seriality and narrative coherence. Furthermore, by not retaining a stable presence on a network’s schedule, reruns may air unexpectedly, entering people’s living rooms without prior notice, and as a result, address different spectators each time. It therefore becomes more and more apparent that both queerness and reruns have much in common: they are flexible, peripheral, chaotic, arbitrary, and fluid, as well as ephemeral, low, light-hearted, and, disruptive, subversive, liminal, and transgressive.

If television products of the past are considered ‘bearers’ of the historical universe during which they were made and seen, the rebroadcast of the very same television products at different times can potentially disturb their temporal order and ‘sealed’ histories. Yet, this is not only a matter of chronological distance; reruns, lifted out of their spatio-temporal context allow the possibility to expand the understanding of how these texts may have initially been perceived and enrich how they may presently be read in the light of their resemblance to more contemporary productions.

For instance, I wonder: how would contemporary queer spectators, familiar with identity politics and American visual culture, read homosexual Yiannis from Dimitra Papadopoulou’s classic sitcom The Unbearables? What type of femininities are made intelligible in Alexandros Rigas’ comedyDolce Vita? Further, how are they understood at the present moment? What kind of pleasures do fans experience when watching a rerun and then discussing specific episodes and scenes with other fans online? I have no clear-cut answers. Nonetheless, it is through these questions that I hope to problematize reruns’ queer representational possibilities and invite scholars to further tousle with the ‘scattered field” of television (Aitaki 2018), including a particular focus on television fiction, with the ultimate aim to produce and expose stories of our televised past that may still wait to be (re)discovered.

Reynolds, S. (2011), Retromania: Pop Culture’s Addiction to Its own Past, New York: Faber and Faber.

Special thanks to Jalex Noel, queer artist and graphic illustrator, based in Athens, Greece 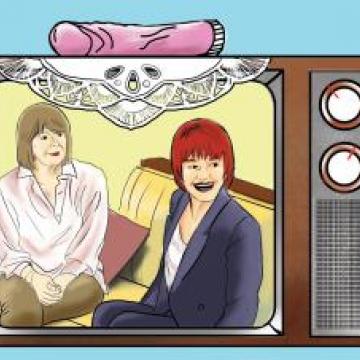