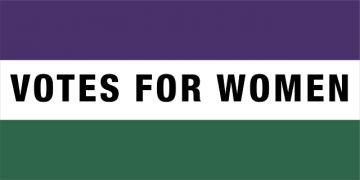 There will be a city-wide raising of the suffrage flag to mark this historic date, organised by TORCH (The Oxford Research Centre in the Humanities), in collaboration with City and County Council representatives, and other cultural organisations in the city. This will launch a year-long programme of initiatives including exhibitions and public lectures.

On 6th February 2018, 21 University of Oxford Colleges, along with the Humanities Division in Radcliffe Humanities (originally the Radcliffe Infirmary), the Music Faculty, the County and Town Halls, and Oxford Castle will fly a flag which reads ‘Votes for Women’ printed on a backdrop of purple, white and green – the colours of the Women's Social and Political Union, which was led by Emmeline Pankhurst.

In the evening, TORCH and City and County Council representatives will host an evening of celebration of the birth of Olive Gibbs. Known to many as a political trailblazer and leading female activist of her time, Olive was a redoubtable Labour Councillor on the City and County Councils. She saved Jericho from destruction and got the Cutteslowe wall demolished. She was also a founding member and the national chair of the Campaign for Nuclear Disarmament (CND). The celebration of Olive Gibbs will take place at 6pm, Tuesday 6 February 2018 at Oxford Town Hall.

Philip Bullock, TORCH Director and Professor of Russian Literature and Music, University of Oxford said: ‘I am pleased to see this excellent collaboration to mark 100 years since some women were granted the right to vote. It is only right that we celebrate this historic moment, just as we must still continue to work towards full equality for all citizens. I look forward to seeing the suffrage flag raised above 21 of the University’s Colleges, faculty and departments, and above prominent city and county buildings.’

Dr Marie Tidball, TORCH Knowledge Exchange Fellow and Research Associate at the Law Faculty, said: ‘Bringing together civil rights research and civic life is a natural part of work in the humanities and a way to celebrate the history of suffrage, but also to highlight the ways in which all people can access and use their right to vote and where barriers to accessing such rights might need to be removed.’

View a map of all of the places that will fly the flag on 6th February here.