This interdisciplinary conference, kindly supported by the TORCH Oxford Medieval Studies Programme, hoped to unite classicists, archaeologists, celticists, historians, and literary scholars in investigating the profound influence of Celtic and Classical heritage on the development of British identity. Three chronologically arranged panels attempted to trace the respective importance of Ancient Britons and Romans in British culture over the centuries, starting in the pre-Roman period and ending in the present day. Covering such a vast expanse of time presented a particular challenge to our medievalists, whose papers were separated from each other by centuries. However, they made sure that medieval legacies loomed large throughout the conference, with ideas about Roman influence in post-Roman Britain and the long shadows cast by medieval origin myths recurring again and again.

The first panel, chaired by Prof. Thomas Charles-Edwards (Oxford), featured Sir Barry Cunliffe (Oxford) on the theory that Celts first emerged in western Europe, Dr. Alex Woolf (St. Andrews) on how a British people might have developed in late antiquity, and Prof. Helen Fulton (Bristol) on the use of Troy by medieval English writers.

The second panel, chaired by Rhys Kaminski-Jones (University of Wales), featured Prof. Ceri Davies (Swansea) on the reception of Trojan origin myths by Welsh renaissance humanists, Prof. Philip Schwyzer (Exeter) on the politics of British antiquity under James I, and Mary-Ann Constantine (University of Wales) on how eighteenth-century travellers to Wales and Scotland imagined the Celtic and Roman past.

The discussion sessions following each panel provided a wide-ranging and cross-disciplinary analysis of this aspect of British identity, touching on the problematic nature of “indigenous” Britishness from the Middle Ages to the present day, the exclusion of women from a male-dominated Celts v. Romans historical narrative, and the role of contemporary heritage bodies in emphasising Celtic or Classical aspects of the British past. The conference was enthusiastically received, with all 60 available places filled, and with the possibility of published conference proceedings being actively considered. The organisers would like to thank everyone involved in making it a success, and especially the Oxford Medieval Studies Programme who helped make it possible in the first place. 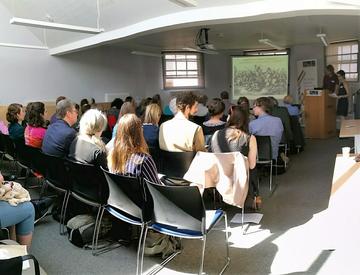