On Saturday 8th November, together with my Warwick colleague and friend Dan Orrells, I convened a symposium at Corpus Christi College on the subject of ‘Ovid and Postmodernism’. The nine wonderful papers constituted a day that was truly inter- and cross-disciplinary, making connections, in their discussions of recent and contemporary receptions of the Roman poet Ovid, between Classics, English, Performance Studies and History of Art.

One highlight of the event was the paper by Minna Moore Ede, assistant curator of Renaissance painting at the National Gallery, about the black British painter, Chris Ofili. Moore Ede’s focus was Ofili’s contribution to the huge and ambitious National Gallery/Royal Ballet collaboration two years ago:  Metamorphosis: Titian 2012. The project involved the responses of three artists (Conrad Shawcross and Mark Wallinger as well as Ofili)   to three paintings by Titian; the Titian paintings are themselves responses to different myths in Ovid’s Metamorphoses about the Roman goddess, Diana. Each artist exhibited work in the National Gallery, and at the same time worked with Royal Ballet choreographers and dancers to design both the set and costumes for their three respective ballets.

Moore Ede’s paper gave a wonderful overview of Ofili’s role in the project: his six paintings that were hung in the gallery, including ‘Ovid-Windfall’ (reproduced here), his beautiful backdrop to the ballet, which he insisted on painting himself (rather than instructing others to fulfil his design), and his meticulous, highly individualised costumes. As Moore Ede pointed out, this work is suffused with the colours of the landscape of Trinidad, which is now Ofili’s home. The painter also includes figures emblematic of the Caribbean such as Ovid-Windfall’s ‘Rastafarian magic man, sitting on the side of the street in Port of Spain’.

Implicit in Moore Ede’s account, from my own perspective anyway, was the suggestion that through his encounter with Ovid’s wonderful poem, and its thematic of borderlands and transformations, Ofili has discovered a new sense of personal agency in his work. Thanks to the fact that Ovid’s Metamorphoses resists any single meaning or message, makes no claim to originality, and assumes no fixed subject,  Ofili felt that he could become part of the interpretation, and that he ‘was not excluded from the sacred ground of Classics’.

There were two lines of argument in Moore Ede’s paper which to my mind converged. The first was that through his role in the Titian 2012 project, Ofili had had to confront several ‘grand narratives’ – that of Titian, that of the National Gallery, that of the Graeco-Roman antiquity, and that of the Royal Ballet. After this confrontation came a kind of liberation. The second was that since the Titian 2012 project, for example in his current exhibition in New York (‘Night and Day’), Ofili has for the first time begun to  represent himself, to include self-portraits in his work. So his Ovidian encounter, it could be said, was a transformative one for Ofili himself.

Tessa Roynon is a Research Fellow in English at the Rothermere American Institute. She is currently working on Ralph Ellison’s engagement with ‘Western’ culture for a book about modern American fiction and the classical (Egyptian, Greek and Roman) tradition. 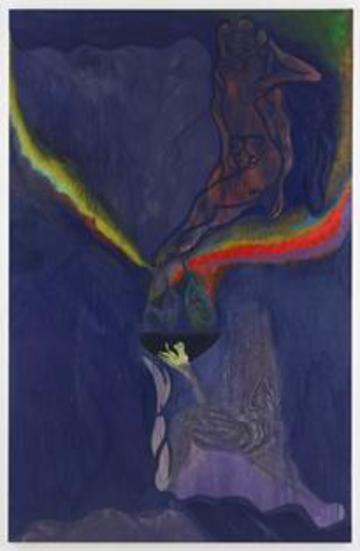