City of Ladies: modern artists are redefining a 15th-century call to arms by an early French feminist

Alone am I and alone I wish to be.

So runs the opening line of one of the most famous ballades composed by Christine de Pizan (c.1364 to c.1430), a professional writer in service at the court of France in the early 15th century.

Her story has particular relevance today. Over the course of our recent enforced and necessary isolation, several news outlets have pointed out the productive potential of quarantines for Boccaccio and Isaac Newton, both of whom composed their magnum opuses from a place of seclusion. Christine’s case is slightly different – rather than being forced into solitude, she sought it out, and from her isolated study in Paris, she imagined a better world.

Christine’s vision was given allegorical shape in her work of 1405, The Book of the City of Ladies – a work whose proto-feminist stance has inspired modern artists to creatively imagine how the world might be created differently for women.

Christine’s City of Ladies is, in essence, an anthology of good women drawn from historical, literary and biblical sources whose combined stories counter the misogyny found so often in medieval literature. In the text, the writer bemoans that men have written “so many devilish and wicked thoughts about women and their behaviour”, a lament that culminates in her crying out to God: “why did You not let me be born in the world as a male?”

Immediately, the three virtuous ladies Reason, Rectitude and Justice appear before her and tell her she is to build a “city of ladies”. This city is, on a literal level, a fortified city, a place in which virtuous women can take refuge against misogynous diatribes – an architectural aspect of the city that is emphasised in the miniatures that illustrate the manuscript.

The city is also represented by a collection of narratives aiming to counter the torrent of anti-feminist literature circulating at the time, and forms a metaphorical double for Christine’s book. The women whose stories form its individual chapters thereby form the materials that construct the architectural city. 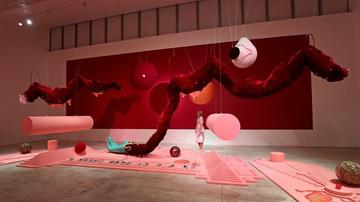 The architectural aspect of the text was taken up and creatively rendered in Tai Shani’s 2019 Turner prize-winning work, DC: Semiramis. It’s an artistic and psychedelic expansion of the medieval text that encompasses performative and sculptural features in an immersive, large-scale installation. In the performance, the bodies of 12 real women partly construct the feminised city that Shani imagines. 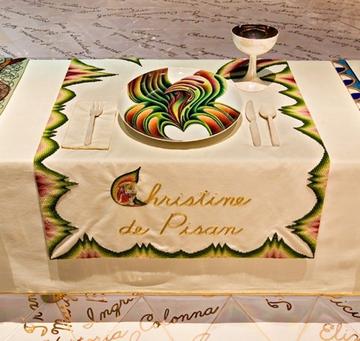 But the recorded performances, which are intended to be viewed alongside the display, also give a certain dynamism to the static figures. Unlike in Christine’s text, where the stories of women from history are recounted in the third person, here they speak directly to the camera to tell their own.

Shani is not the only feminist artist to have been influenced by Christine’s work. Judy Chicago’s art installation The Dinner Party (1979) was the first to incorporate the medieval author into a modern artistic context.

Chicago in effect created her own city of ladies in a different shape – famous women from history are guests at her dinner table as opposed to bricks in a building.

More recently, Penelope Haralambidou, from the Bartlett School of Architecture, displayed her exhibit 'City of Ladies' at London’s Domobaal gallery earlier this year. The exhibit uses Christine’s book similarly to Shani – as a starting point from which to reflect on broader topics.

This installation probes at the architectural theme in Christine’s text: if we had to start from scratch and build a city of ladies, from where would we start, and how would it be different? Haralambidou seeks to claim Christine for female architects since, in her words, “everything we see around us was physically constructed and imagined by men”.

For her display, Haralambidou took the three objects carried by the three virtuous ladies in Christine’s narrative as her focus: a mirror, a ruler, and a vessel. 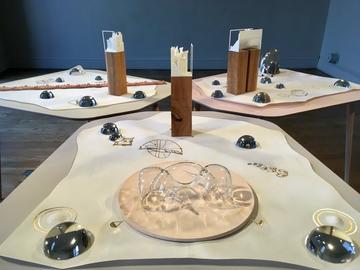 The design of each object has been reimagined in a “feminine” way: the mirror is not flat, but curved and malleable, suggesting a different way of looking at things; the markings on the ruler, moulded around the artist’s fingers, allow measurements to be made using female dimensions.

The final object is a vessel, cast as an hourglass – intended to measure time. In a way that recalls the name of the Time’s Up Now movement, its purpose is to signal that a city conceived around female dimensions has not yet been made possible and to ask: “when will such a city be built?”

The means of constructing the glass vessel, which started as a ball of liquid glass that was gradually expanded, is echoed in a video which shows the biological formation of architectural models. 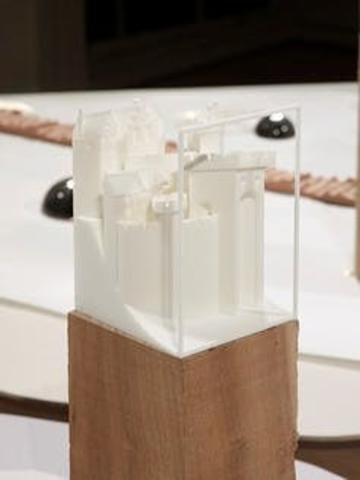 Penelope Haralambidou, ‘City of Ladies’. A 3D-printing of one of Christine’s manuscript illuminations. Andy Keate for Domobaal, Author provided

Penelope Haralambidou, ‘City of Ladies’. A 3D-printing of one of Christine’s manuscript illuminations. Andy Keate for Domobaal, Author provided

These models are to-scale 3D printings of the architecture in Christine’s manuscript illuminations. In the video, the models of the city start off as indefinite shapes that slowly morph and grow until they form distinct structures and buildings. As the shapes take on architectural forms, the medieval illuminations are projected onto the emerging structures. The sounds on the video – the pulse of a heart, liquids oozing and bubbling, the muffled sound of a distant female voice – confirm that what we see is the city growing inside a womb.

Although it does not provide answers to how the new world into which we now tentatively begin to emerge will be shaped differently, artistic adaptations of Christine’s work are a testament to art's providing a medium in which alternatives to the status quo can be explored and imagined.

As we find ourselves trying to glimpse the new world take shape – the principles and people that will be valued within it – it may be of some comfort to know that women have been dreaming of a changed world from a place of solitude for hundreds of years. Can we dare to hope that some of those dreams might be about to come true?

This article was originally published in The Conversation. 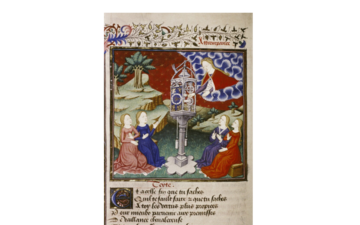 The Bodleian Library holds four manuscripts of texts by Christine de Pizan. These include a copy of the sequel to the City of Ladies, the Book of Three Virtues (also known as the Treasure of the City of Ladies), and two magnificent illuminated copies of the Epistle of Othea, a work that celebrates female erudition and learning.

Charlotte Cooper-Davis is a lecturer in French in the Modern Languages Faculty and at St Hilda's College. 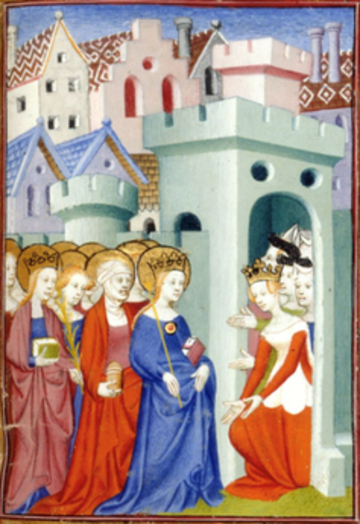 A group of women welcome the Virgin Mary and other female saints into the City of Ladies. London, British Library, Harley MS 4431, fol. 361r