Hosted in associated with TORCH, this three-day conference, the first of its kind, brought together an international cohort of scholars from Canada, Finland, Germany, Ireland, the UK, and the USA to mark the 200th anniversary of Clara Schumann’s birth. It included two keynote lectures by Dr Natasha Loges (Royal College of Music) and Professor Susan Youens (University of Notre Dame), seventeen individual presentations, two lecture-recitals, and a moving performance of Clara Schumann’s songs and piano music by Dr Aisling Kenny, Cecily Lock, and Cheryl Tan. The spirit of collegiality that was palpable throughout the proceedings provided the foundations for stimulating conversations and lively debates, confirming that it is altogether an exciting time for women’s studies in music.

At the heart of the conference was a desire to reanimate the musical and cultural contexts in which Clara Schumann lived and worked. To this end, analytical papers on the aesthetic and expressive worlds of her music were coupled with discussions of places and people, pedagogy and performance culture, reception and legacy. Among the topics under consideration were Clara Schumann’s relationships with members of her intimate circle, her legacy as teacher, the reception history of her performance career, her innovative treatment of form and tonality in instrumental genres, and the poetics of her Lieder. What emerged from the approach of moving freely between music and hermeneutic contexts was a vivid picture of Clara Schumann’s artistic vision, together with an enriched understanding of the significant contribution she made to nineteenth-century life and culture.

At a time when musical canons are being deconstructed, and grand narratives called into question, the conference afforded a timely opportunity to rethink the male-dominated trajectories that have shaped our understanding of the past, and to reassess Clara Schumann’s achievements within the gender-aware and interdisciplinary climate of contemporary musicology. Particularly encouraging was the way in which the papers embraced the fluid boundaries between performance, composition, and pedagogy – an approach that not only brought to life Clara Schumann’s multifaceted abilities in these three areas, but also allowed us to consider new possibilities for music history in which women’s contributions are celebrated alongside that of their male contemporaries.

It is a privilege in closing to express gratitude to our sponsors, TORCH, Lady Margaret Hall, Oxford’s Faculty of Music, Music & Letters, and The Royal Musical Association, without whose generous support ‘Clara Schumann and her World’ would not have been possible. 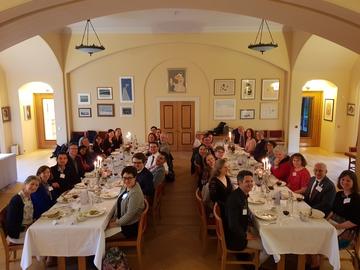