Within the high-ceilinged and spacious opulence of Harris Manchester College, Saturday’s Mellon-Sawyer panel-led discussion was reminiscent of a courtroom. Amid a star-studded cast of prosecutors, defence advocates and witnesses, the Public Act of Commemoration was on trial.

Phillipe Sands QC opened proceedings for the prosecution. Drawing upon his own extensive experience of post-conflict human rights law and war crimes prosecutions, he argued that commemoration is a process of looking back and then deciding what to remember. In being so it is a process of categorisation which invariably obscures or privileges traumatic memories. This commemorative act of categorisation can consequently be extremely painful – Sands cited examples of survivors from the Balkan civil wars who were deeply distressed to learn that the annihilation of their own village was legally classified (commemorated) as a mere ‘crime against humanity’ and not, as was the massacre of a neighbouring area, as a ‘genocide’. Commemoration is, argued Sands, a public act which will thus necessarily deviate in its emphasis from the remembered traumas of private grief. This publicly officiated change of emphasis can upset, anger, and potentially enrage. Therefore commemoration, argued Sands, must only ever be a private act of remembrance and reflection.

For the defence Lord John Alderdice addressed the court. Lord Alderdice did not point out that, despite the complex latent tensions of the new Balkan states (expertly unearthed and alluded to by Aminatta Forna in her Mellon-Sawyer Seminar Series opening address), reconciliation in the Balkans has actually been a huge success. Perhaps Lord Alderdice did not need to: he is uniquely able to draw upon intimate knowledge of peace-building and post-conflict reconciliation closer to home.

Commemoration, argued Lord Alderdice, is not just a process of looking back but also a process of looking forward, of learning from the past to imagine a better shared future. If it is to be reconciliatory this future must necessarily be shared and so any act of commemoration must also necessarily be public. Drawing also on his professional experience as a clinical psychiatrist, Lord Alderdice explained how in sufferers of trauma-related neuroses such as anxiety disorders and PTSD, treatment required the creation in the mind of the patient a clear delineation between what had happened in the past and what could happen in the future. For both patient and society, Alderdice suggested, it must be made clear that while events of the past cannot be altered, they do not have to be repeated. It is to clearly and memorably make this point that we need public acts of commemoration.

Recognising these connections between the past and the future and between the public and the private, while also being highly emotionally sensitive to the distinctions between them and the difficulty some may have in perceiving such distinctions, is most assuredly a tough job. It requires, as panellist Jeremy Treglown made clear, skilled and empathetic historians to read the private lives and events of the past and to map them into a trajectory in which we can understand causes and consequences but also understand that what’s past is past and that futures can be hopeful. And it also requires, as Treglown again pointed out with reference to both the world wars and the Spanish Civil War, an understanding that commemoration is not merely a gaze at the past for a vision of the future, but is also a powerful political tool of the present.

In questioning how a group of individuals can possibly simultaneously collapse and distinguish traumatic memories of the past, prhttps://www.torch.ox.ac.uk/people/alexander-donnellyesent, future, public, private, and state, Lord Alderdice took inspiration from the comments of his father, a religious leader: ‘I am a preacher, and I preach. But if I could I would sing!’ Lord Alderdice, a politician, writes prose but confessed that if he could he would write poetry.

It was fitting, then, that both the opening and closing words of Saturday’s meeting were poetry. Poet Adnan al-Sayegh closed the day’s proceedings with a poem written in Arabic, translated collaboratively into English, which in Basra in 2006 nearly cost him his life: while reciting the poem, in which Allah appears as a singing flute, militia men jumped onto the stage and attempted to cut out his tongue. Poetry, it seems, even that which is collaborative, beautiful, and pleading for peace, can still be interpreted as a declaration of war.

But if Adnan al-Sayegh’s commemorative act nearly cost him his life, fellow Iraqi poet Dunya Mikhail is quick to respond that poetry saved hers. What’s more, it appears that she hopes her poetry will save others too. Mikhail opened the morning’s discussion with a poem set at a mass grave in southern Iraq in which the womb of an Iraqi mother has become the bag with which she collects her dead son’s bones. ‘Bag of Bones’ is a grotesque mutilation of the past by the wars of the present, and by presenting it as such Mikhail pleads with us to imagine a future in which the mother did not outlive her child, and in which other mothers are not merely searching for lost bones.

The trauma of Iraq is, as we know, ongoing. And in naming a group of women assassinated by fascists during the Spanish Civil War, some pregnant at the time of their killing, Jeremy Treglown also alluded to new frictions resurfacing in Europe. Can commemoration ever truly heal? The jury will reconvene, auspiciously, on 11th November.

You can watch the opening statements from the panellists on our Podcast Series. 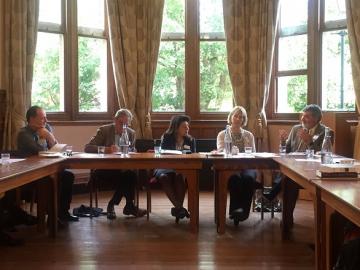