In the week that there have been community calls to turn the Grenfell Tower into a memorial to those who tragically lost their lives in the blaze that destroyed it, I have been thinking about discussions in the Post-War: Commemoration, Reconstruction, Reconciliation workshop in February.

The key moment for me was when Emma Login discussed Historic England’s programme for war memorials. In recognising the important community role many of these monuments have played and continue to play during annual Armistice commemorations, they are listed.  But national listing removes some of the local and community autonomy of the monuments.  Kensington and Chelsea Council has said that it will be up to the community to decide what happens to the burned remains of Grenfell Tower, but if it is turned into a permanent memorial, will the local community lose the ability to grieve and commemorate actively and creatively? Gabriel Moshenka discussed the role of memorialisation in the active participation of the project that led to the building of the Stairway to Heaven monument of the 1943 Bethnal Green Tube Disaster, and how the work involved to erect this monument was probably more community-building than the completed monument.

In my own work on the Tower of London’s Blood Swept Lands and Seas of Red installation in 2014, it cannot be said that the monument to the British dead of the First World War was not effective, but it can be argued that its true success lay in the participatory nature of the installation—in the volunteers who ‘planted’ each of the 888,246 ceramic poppies.  As one volunteer said of the experience:

“My enthusiasm, like that of many others, for the project seemed to infect those around me who too wanted to be part of this fantastic idea… why? I had not lost any family members in either the First or Second World War nor in any subsequent military action but nevertheless like so many people I was swept away by the sheer scale of the project which made me consider the individuals who had given their lives for their country. Walking among the poppies was so sobering and thought provoking.”

Commemoration is an active state.  It can be directed by political leaders, but also has the potential to reflect the wishes of the local community, and to directly involve them in the creation of commemorative monuments.  Heritage organisations, including museums, historic sites, regulatory bodies and archaeologists, can be a useful broker of the relationship between the community and their memories and histories. 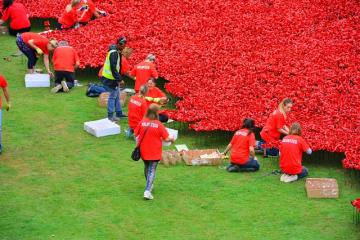