The Second Short Wave of Democratisation in Latin America: 1943–1963

For historians such as ourselves working on twentieth century Latin America, questions of democracy and democratic expression are seldom far away. Be it post-war Colombia or Brazil, the Caribbean of the Cold War era, or Argentina's emergence from military dictatorship in the 1980s, the region's turbulent relationship with democratic participation and authoritarianism is, in one way or another, a thread central to all of our projects. In the historiography however, the trajectory of democracy in Latin America during the period has hitherto received only fleeting attention. By way of contextualising his seminal work on the so-called 'third wave of democratisation' beginning in the 1970s, Samuel Huntington devoted barely a page to the preceding 'second wave' of global democratic flourishing, much less in relation to Latin America. This is doubly surprising given that during the twenty-year period from the mid 1940s to the mid 1960s, thirteen countries in the region underwent democratic transitions, significantly outpacing the number of nations that remained under authoritarian rule. Although most experienced regime reversals in the following decades, Colombia, Costa Rica and Venezuela remained stable democracies at least until the late twentieth century. With this in mind, our conference aimed to provoke discussion of this somewhat understudied element of Latin America's twentieth century narrative, digitally bringing together a diverse group of presenters and attendees from both sides of the Atlantic.

Consisting of three panel discussions and a keynote address, and organised with the support of both TORCH and the Latin American Centre, the two-day event saw a series of insightful presentations from senior scholars and doctoral students, with lively debate and excellent attendance throughout. The first panel, entitled 'Thinking and Discussing Democracy' and featuring contributions from Laurence Whitehead (University of Oxford), Jorge Nállim (University of Manitoba), and Jonathan Madison (University of Oxford), involved a series of welcome reflections on the premise of democratic waves, with all participants agreeing that while metaphorically convenient, the term fails to fully capture the complex reality of the Latin American experience. Further questions of what is meant by 'democracy', and how the term differs in its uses and implications across the region and the period led to some engaging discussion. As Whitehead noted, an interpretation which looks to account for global and regional processes in specific national contexts provides perhaps the richest and most nuanced historical perspective, whereby themes of democracy both specific to Latin America and those more broadly applicable might be best understood and assessed.

In his keynote speech, Martin Conway (University of Oxford) offered a panoramic perspective of democratisation in Western Europe and Latin America during the period, with a focus on the convergence of popular will, the state, and local communities in fostering environments within which certain variants of democracy and democratic engagement could gain traction. In the Q&A session that followed, the discussion touched again on the validity of attempting to tease out consistent narratives of democratisation, with various participants observing the heterogeneity of the process both between and among the Latin American and European cases.

Day two of the conference began with our second panel discussion, entitled "Mobilisation and Participation' and featuring presentations from Isabel Castillo (Pontificia Universidad Católica de Chile), María Elvira Álvarez Giménez (Mondes Américains/Université Paris I Panthéon-Sorbonne), and Rodrigo López Martínez (University of Manchester). Bringing together historical and social science perspectives, in their papers the contributors touched on the roles of women's participation, voting rights, and journalists and intellectuals in the practice of democracy, again prompting stimulating discussion, during which questions of inclusivity, competition of interests, and regional and national divergence came to the fore.

The final panel of the conference - 'International Dimensions of Democratisation' - again brought together a formidable collection of interdisciplinary presentations, featuring Stella Krepp (University of Bern), Alejandra Bronfman (University at Albany), and Kathryn Sikkink (Harvard University). Via discussions of pan-Americanism, human rights, and - using the case of Puerto Rico - the inherent contradictions of democratisation during the period, all three shone a light on the concomitant transnational phenomena underpinning the moment of the second wave. As had become the norm, the presentations again led to a fertile and free-flowing discussion, promoting precisely the sort of dialogue hitherto lacking in relation to the topic.

This last session was followed by a brief but highly convivial and informal discussion among participants from across the two days of events, offering a moment to build the kind of relationships we hope to be a legacy of the conference as a whole. In this mould, the aim is for the conference to serve as a springboard for the fostering of a multi-disciplinary network of researchers and early career scholars, to be coordinated under the banner of Democracy in Latin America Past and Present (DLAPP) - a new initiative bringing together those interested in the history of Latin American democracy. With that in mind, work has begun on compiling a forthcoming dossier featuring a selection of the papers presented at the conference, to be published at further notice.

While an online conference had not been our initial plan, the opportunity the format offered for a broader and more diverse range of participants and attendees was on full display throughout. We publicised the event online through our Twitter account (@DLAPP2021) and via the websites and social media platforms of our institutional collaborators and allies. We also worked extensively with Ecuadorian graphic design firm Numeral Studio to produce a suite of promotional materials. In July, we launched our official webpage (dlapp.org), which we will continue to use to share some of the conference outcomes and promote future events.

We would like to thank all of the presenters for their time and contributions, as well as TORCH and Oxford’s Latin American Centre for their support. We look forward with interest to future collaborations and discussions! 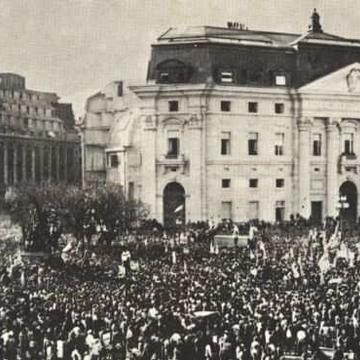