'Cosmopolitan.' The word tends to conjure up images of luxury and exclusivity. First-class airplane tickets from New York to London to Beijing. 'Global' styles that pull from the richness of the world's artistic traditions and then price it out of range. A definition of 'culture' that relies upon a sort of savviness that can only be attained through wealthy family connections or elite educational experiences.

This is typically the definition that they have in mind when they hear the word 'cosmopolitan.' But the cosmopolitanism that surrounded me in my hometown of San Juan, Puerto Rico had nothing to do with any of the above. On the contrary, the cosmopolitanism that I knew and loved as I came of age was a means of creative resistance to the cultural homogeneity that is all too often imposed upon places that experience the 'colonial gaze.' And it was also inextricably linked to grassroots heritage projects.

San Juan is the capital city of Puerto Rico, an island in the Caribbean that has for centuries been governed as a colony. Beginning with its 'discovery' by Christopher Columbus in 1493, the island was part of the Spanish Empire, valued for its strategic location, plantation-ready soils, and exploitable labor force. In 1898, Puerto Rico was acquired by the United States, and continues to be an unincorporated territory, akin to the US Virgin Islands or Guam.

Throughout the centuries, San Juan has been an important seat of colonial power, but also the site of important cultural and artistic innovations. For instance, African and indigenous musical forms were brought into dialogue with one another in San Juan's more peripheral neighborhoods. This dialogue gave way to genres of music and dance such as salsa. Through these forms, multiple elements of Caribbean experience-- including a reverence for nature, a celebration of diversity, and an enduring affirmation of physical, creative and spiritual freedom-- have crossed oceans and captured the hearts of people all over the world.

Today, San Juan is as variegated as it ever was. And the city continues to incorporate diverse influences from the Caribbean-- and, increasingly, the world-- into public life. The result is that in San Juan, it is extremely easy to celebrate vast diversity-- cosmopolitanism, if you like-- while still affirming the local.

If one has any doubt about this, one simply has to stroll down the streets of Viejo San Juan, which houses the island's oldest European structures and preserves them with the assistance of UNESCO and a general respect for this cultural landscape.

Numerous shops are owned and run by men and women from other Caribbean islands, and their stores sell paintings, pottery, woodwork, and music from throughout the region. Others are owned by people from countries as far-flung as Turkey, Argentina, and India, and their interiors feature fabrics, jewelry, and soaps from all over the world. World music compilations are available in practically every shop of this kind. The weekend mercado agrícola (farmers' market) features agro-ecologists from all over the island-- many of whom had spent extensive amounts of time in cities like New York. And on sunny afternoons, young men and women from all walks of life gather on a large green overlooking the Atlantic and practice capoeira, a Brazilian martial art.

Living in San Juan taught me that 'global' does not necessarily mean 'elite.' On the contrary, perhaps-- 'global' is only possible in places where the fabric of community, and an attendant appreciation of heritage, is strong enough to support the tremendous creativity and variety that emerges in any truly cosmopolitan place. Puerto Rico's ambiguous political situation tends to shift people's focus towards culture-- with brilliant results.

Priya Parrotta Natarajan is an arts organizer, interfaith climate activist, and aspiring writer based in Washington, DC. Her recent work can be accessed at priyaparrotta.com. 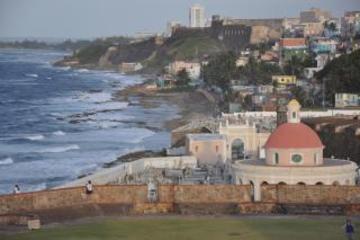