Dance as Grace Seminar Trinity Term 2021 (34 in attendance from the project).

Prof Amy Zavatsky is a Reader in Engineering Science at the University of Oxford and a Fellow and Tutor in Engineering at St Edmund Hall, Oxford. Her research falls in the area of biomechanics of the human lower limb, with a focus on the analysis of human gait and foot and ankle biomechanics. Her expertise in quotidian movement, orthopaedics, and sports puts her in an ideal position to comment on the concept of grace in dance from an engineer’s perspective.

Amy delivered an inspiring talk to an audience from the humanities and sciences. She communicated equally lucidly with those of us who knew nothing of engineering and those from the discipline of Engineering itself. The response was unanimous – Amy outlined her argument with clarity, illustrated her points with helpful slides and made accessible to everyone mathematical formulae, sophisticated concepts of modelling and engineering principles that gave us all new insight into the physics and physiological operations of the human body in movement. The talk was divided into three main sections: 1. Amy first outlined an engineering approach to problem solving. 2. She moved on to explore concepts in the analysis and modelling of human movement relevant to dance. 3. She addressed the issue of dance and grace itself and the degree to which engineering models might (or might not) account for the performance of grace.

1. Amy explained the fundamental concept of Engineering: the application of mathematics and scientific principles to solve practical problems. She added to this the underlying subtext of that statement - how can we solve the problem within certain constraints? Other aspects of the principles of Engineering include analysis and design, and the notion of the model, whose dictionary definition is ‘a simplified (often mathematical) description of a system etc., to assist calculations and predictions’.

2. With these principles in mind, Amy then drilled down into the analysis of human body movement and the use of models. She explained the concept of ‘bodies’ as a system of connected particles (particles are objects which have mass but no shape). She showed the way in which systems of bodies can be seen as independent or interlinked, and introduced the equations of motion formulated by Newton and Euler. 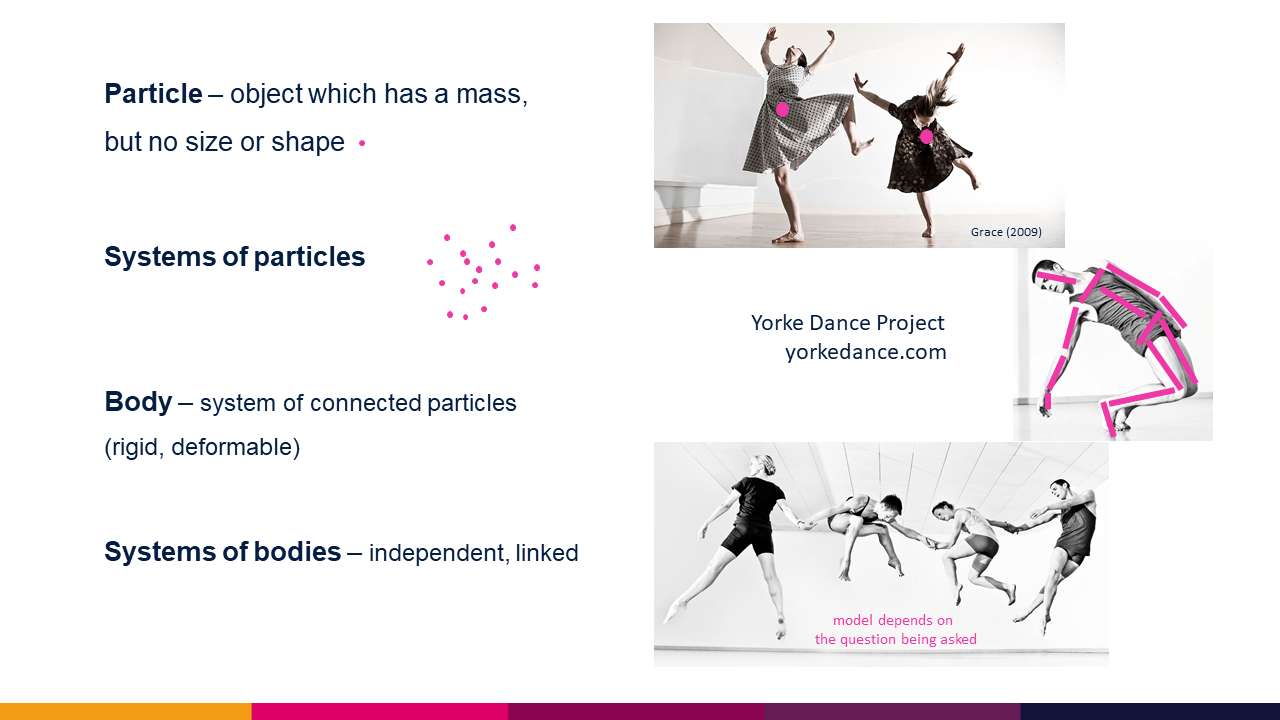 Amy then explored other key concepts for the modelling of body movement: mass, centre of mass, moments of inertia, and how these contribute to the distinctive ways in which the human body can be modelled, using body segment parameters or the body’s ‘centre of mass’. She showed fascinating illustrations of athletes in action – as in the high jump – and explained how an athlete can control the position of the centre of mass in order to achieve a more efficient and effective method of jumping. The question was also posed: do these methods of jumping equate to the most graceful? The exploration of spinning (as in a gymnast on the bar) – the calculation of moments of inertia and the body’s resistance to being rotated about an axis – raised questions about the dancer’s ‘efficiency’ in performing spinning movements or pirouettes.

Next, Amy explored path of motion and position as a function of time. She returned to the identification of the centre of mass, but this time plotting the trajectory of the body centre of mass as it moves along a path. Questions arise about whether the centre of mass takes a direct or indirect path from one point to another? Is the path straight or curved? Is it cyclic? Is it repeatable? How smooth is the path? Does its direction change abruptly? Amy used illustrations of athletes and gymnasts, showing initiation of motion from the starting blocks in a race, to think about velocity and acceleration. A study of the hand motion of stroke patients helped to demonstrate how smoothness and coordination of movement are quantified.

A fascinating section on work, energy, and efficiency grew out of the discussion so far. Amy showed biomechanical models needed to explain the distinctions between external work (done against gravity) and internal work (done by the muscles in flexing and extending the joints). She considered efficiency of movement, using examples such as walking, and asked, how much of the walking motion is due to gravity alone? Some fascinating observations about how the activity of the joints and ideas of ‘swinging’ pendulums contribute to distinctive forms of ‘gait’ all contribute to our understanding of grace. We get a sense of how complex physiological phenomena working in relation to gravity, such as we find in dance, might arrive at the graceful movements. Finally, Amy’s remarks about motion coupling between joints, about coordination as the ability to use different parts of the body together smoothly and efficiently led to the concluding section:

3. What about dance and grace? Amy reminded us that all the concepts of engineering discussed above help us to analyse a graceful movement. And yet, she observed, are there not many other factors that science cannot altogether analyse, that make up ‘graceful’ performance of movement? Amy discussed a variety of contributing factors, using effective illustrations– costume, music, the subsections of dance as a genre, including narrative, expression, gesture, illusion. Finally, Amy concluded with the words of mathematician Samuel Karlin (RA Fisher Memorial Lecture, Royal Society, London, 20 April 1983): ‘The purpose of models is not to fit the data but to sharpen the questions’. 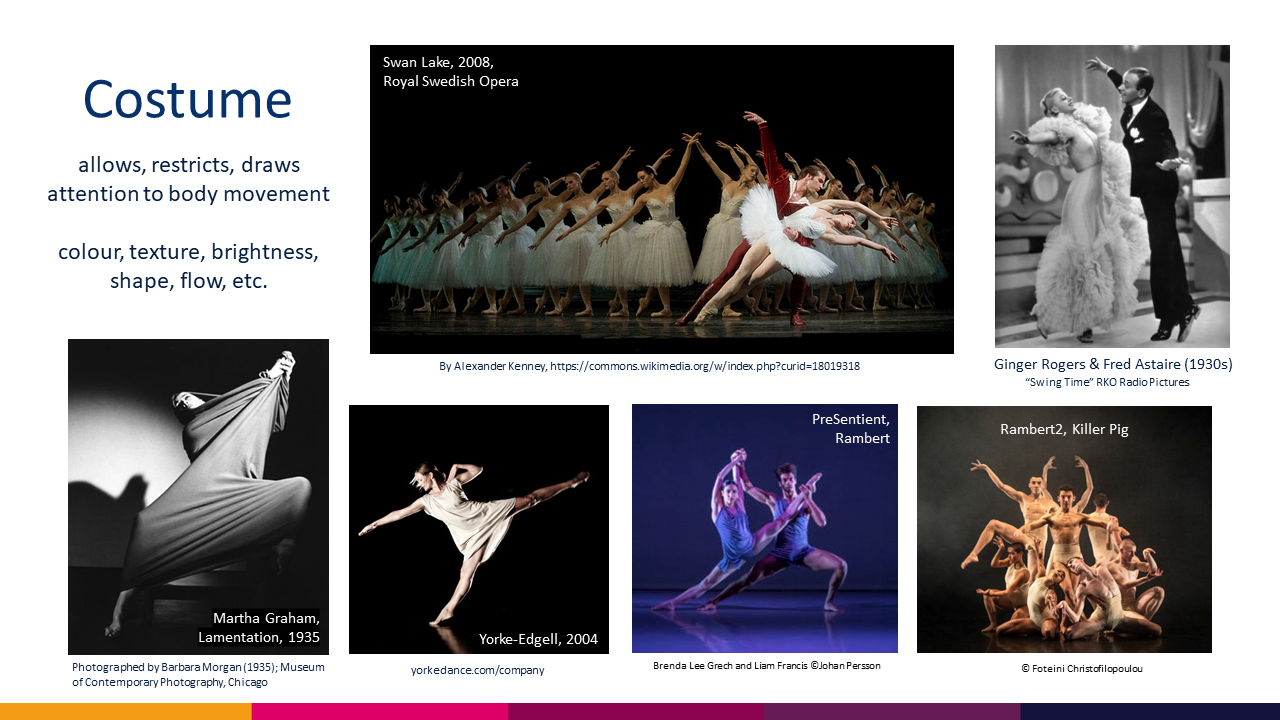 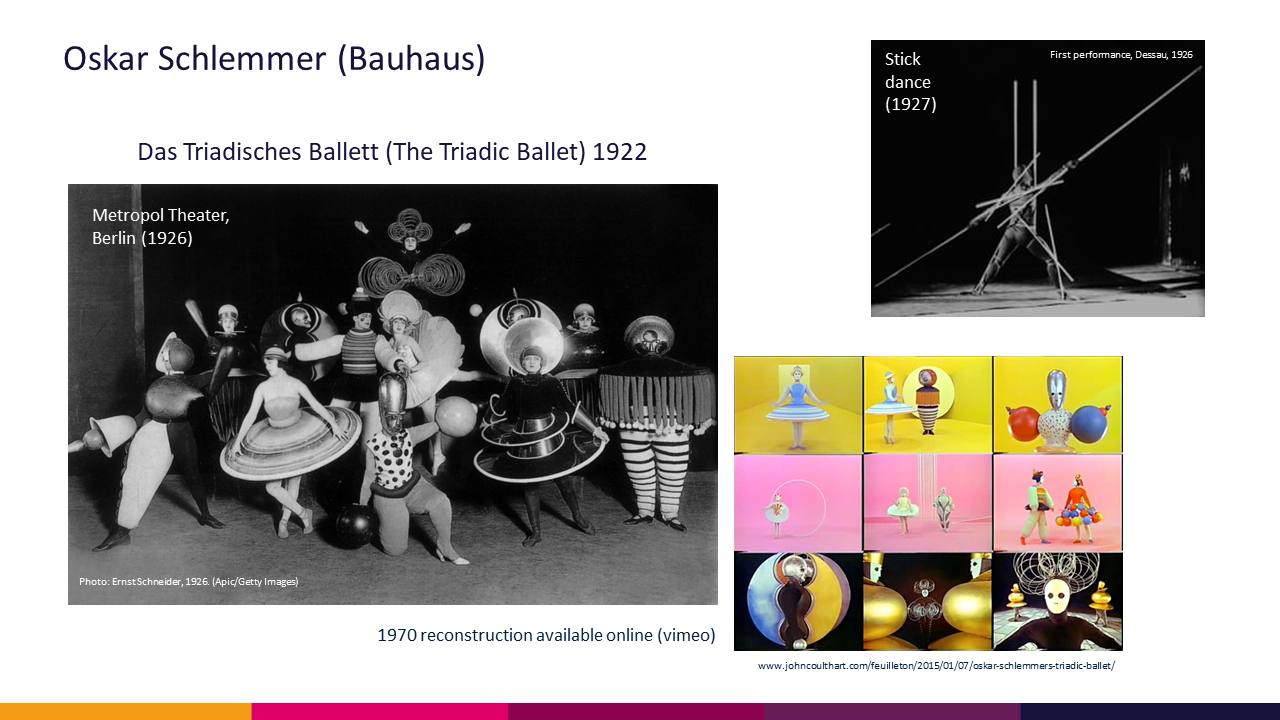 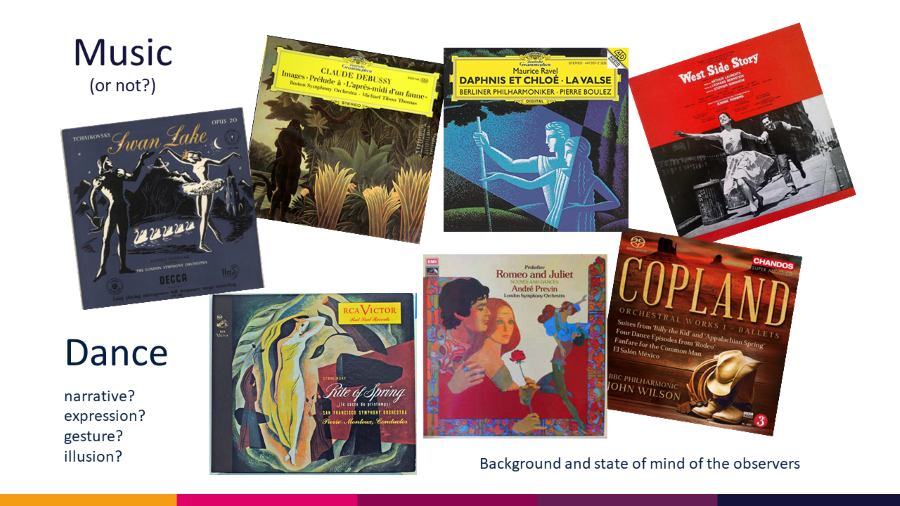 The talk was received with resounding (online) applause and there followed a stimulating thirty-minute discussion in which audience members related what they had learned from the talk to questions about aesthetics, about inertia, distinctions between uses of silence and stasis, of proprioception, line, harmony, balance, rhythm, what constitutes choreography, the relationship between human and mechanical movement. The talk revealed some of the areas which we needed to pursue further in the project – in relation to theological concepts of grace, linguistic issues, and the specificities of other art forms. We all felt that the discussion about grace had moved forward, ‘sharpened the questions’ and benefitted enormously from the precise understanding of the mechanics of human body movement from an engineer’s perspective. 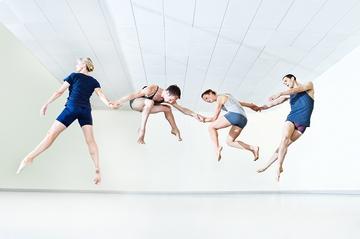