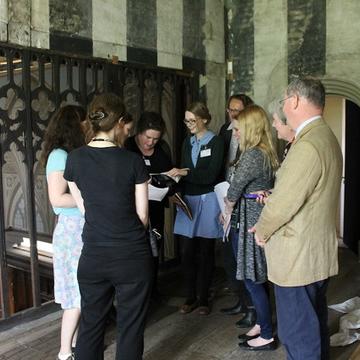 Dr Lucy Kaufman, of Keble College has won an Early Career Researcher award in this year’s Vice-Chancellor’s Public Engagement with Research Awards, which celebrate public engagement work across the University. The announcement was made at an awards ceremony at the Oxford University Museum of Natural History on 28 June hosted by Vice-Chancellor Professor Louise Richardson.

Dr Kaufman won her award for her work with the National Trust during their renovation of The Vyne, where Henry VIII visited his Lord Chamberlain, Sir William Sandys in the summer of 1535.

Dr Kaufman’s research has shaped an innovative new visitor experience at The Vyne, transforming the ground floor into an immersive depiction of its rich and vital history, particularly the Tudor progress. She worked with curators, heritage professionals, and an interdisciplinary team of scholars to reimagine this crucial moment in British history. From animated moving-tapestry panels to a breathtaking chapel that looks, smells, and sounds as it would have done during Henry’s visit, the exhibition has brought new life to well-known stories and cutting-edge research to the public.

In addition to the estimated 180,000 visitors to the exhibition, Dr Kaufman has also engaged over million readers and listeners through talks, articles, and interviews at The Vyne and in the media, including BBC radio and television, reaching an ever greater and broader range of publics.

Dr Kaufman says the project has changed her fundamentally as a scholar, crystallizing new ideas about her own research and discovering new ways of sharing it with audiences.

The Vice-Chancellor's Public Engagement with Research Awards recognise and reward those at the University who undertake high-quality engagement activities and have contributed to building capacity in this area. Dr Kaufman was one of five Early Career Researcher winners at the awards.