For “Earth,” we invited our participants to dwell on one or more of the following areas:

We had thought long and hard about the format of the event. The schedule—available in full here—reflected our aim to provide as much time and space as possible for discussion and informal networking. Paper sessions consisted of two papers of roughly 30 minutes, followed by a five minute interval for those in the audience to speak to the people around them about something in the papers that sparked a question or provoked a response. This was followed by a traditional Q&A. The meeting also featured two workshop sessions: a careers roundtable on day one and then three concurrent work-in-progress sessions on day two.

Each of the four paper sessions skilfully traversed period and disciplinary boundaries. These sessions took us from eleventh-century sermons of Wulfstan, to the remarkable seventeenth-century depictions of stone by Jacopo Ligozzi, to satirical French comics from the early 1970s. Among many other locations, they also took us from the cramped stage of the Rose theatre in early modern London, to the ruined masterpiece of hydrological engineering that was the Aztec city of Tenochtitlan, to Turkish tulip markets, and on to Silicon Valley via seventeenth-century visions of the marbled and adamantine New Jerusalem. This is only a small window on a wide array of approaches and primary materials; our presenters’ paper titles as well as a working bibliography of sources central to their work are gathered at the end of this post.

Each session also sought to examine how, in the words of our original call for papers, the ‘premodern archive resonates with contemporary concerns around environmental degradation and global warming’. Further, most of the papers considered how where we reside and write informs and inflects our work in the environmental humanities. Lyle Massey, for example, began her discussion of premodern depictions of St Jerome, including Giovanni Bellini’s St Jerome in the Desert (c. 1450), with an account of desertification in California in the twentieth and twenty-first centuries. Similarly, Hillary Eklund closed her account of water management and mismanagement in colonial Mexico by turning briefly to her current home city of New Orleans, itself precariously located amid an increasingly “unfast” landscape.

The two workshop sessions provided the opportunity for all of our participants to discuss their work and share some of their experiences. On day one was the careers roundtable, led by Tiffany Jo Werth, Vin Nardizzi and Todd Borlik, with valuable additional contributions by Kellie Robertson and Mike Bintley. We discussed a number of pre-circulated readings on the rise of the “environmental humanities” as a field and career trajectory. These materials included an essay by Christopher Schaberg written specially for the occasion, and which can be read here. We also discussed practical issues regarding job applications, article writing, and book proposals. Threaded through the session were important reflections from scholars at varying stages of their academic career on the challenges and rewards of working across disciplinary and period boundaries. Also central to the conversation was a frank discussion of the importance of optimism and the inevitably of pessimism in our thinking both about the planetary future, and the future of the humanities and our place in it.

An informal reception concluded the first day and included a reading and performance by Leonie Mhari of To Where it May Concern. The piece—made with Elinor Scarth, who regrettably could not join us—literally unpacks visual and material fragments of a Scottish landscape, collected in Armadale, Skye and Armadale, West Lothian, from a weathered suitcase. The suitcase was used to transport these fragments to Armidale, New South Wales on 13 February 2019, where new fragments were added. In its repeated packing and unpacking in different locations, To Where it May Concern examines how colonization, capitalism and global warming impinge on the remembering and documenting of landscapes.

The workshop sessions on the second day of the symposium were led by the presenters from our paper sessions:

• Liam Lewis & Vin Nardizzi: “Earth’s Coverings: Animals and Plants, On and Off the Page”

Detailed descriptions of each of the sessions are available here. These sessions were also intended to provide an opportunity for practice-based researchers to discuss their work. In “Land/Landscape,” Lydia Halcrow discussed some of her recent artworks based around the shifting landscape of the Taw Estuary in Devon. In the careers workshop, Olusegun Titus had described some of his ethnomusicological research in the Niger Delta, where the fossil fuel industry continues to decimate the environment and the lives of those who live and work in its wake. Here, he returned to some of the historical analogues for that research, as well as treating those present to a short performance of the traditional Nigerian song “Lori Oke ati Petele” (The Mountain and the Valley). 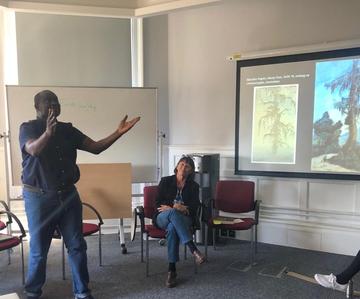 The second day of our gathering coincided with the worldwide Schools Strike for Climate. In the extended lunch break after the workshop sessions, many of us headed to nearby Broad Street, where the Oxford rally was taking place. The handmade signs on display and the chants reverberating among the crowd were a salutary reminder (if one was needed) of the urgency of the environmental crisis; yet the rally was also a reminder that the evident energy for new, better stories about the past and future might be one of the most important renewable resources we have.

In the closing roundtable, Kellie Robertson, Marjorie Rubright and Catherine Walsh offered short reflections on the previous days’ discussions and the place of the environmental humanities in the future of the academy more broadly. The history of colonialism and its deleterious environmental impacts loomed large in many papers and were again an important topic of discussion here; further, we returned, via reference to the work of Kyle Whyte, to Hillary Eklund’s earlier comments on how Indigenous knowledge often presents more “ample” understandings of specific environments. As in the careers workshop the previous day, the possibility of optimism for our planetary and academic futures was also a recurring, or perhaps rather overarching, topic of discussion.

On Saturday morning, those of us still in town visited Lande: The Calais ‘Jungle’ and Beyond, a special exhibition at the Pitt Rivers Museum. The exhibition draws on a wide range of materials (photos, children’s artworks, objects) to trace the history of the “Lande” camp in Calais. There, on a contaminated landfill site, around 10,000 displaced people eventually gathered, most hoping to make their way across the Channel to the United Kingdom. The camp was demolished in 2016, becoming another chapter in a long cycle of settlement and demolition in the Pas-de-Calais over the last twenty years. By examining what it calls the “environmental hostility” of modern borders and bordering practices, Lande demonstrates that the “slow violence” described by Rob Nixon not only displaces people from their homes but is also inflicted on them where they seek refuge.

For the next part of the project, we turn our gaze out to Sea in 2020—further details to follow soon. In the meantime, I would like to take this opportunity to acknowledge the generous support of the TORCH International Partnerships Scheme, the John Fell Fund, and St Edmund Hall. Special thanks to Lidia Domingues, Anbara Khalidi and Sue McCarthy for their help in bringing us all together for “Earth”, and to Christopher Schaberg for taking the time to compose a new essay for the event.

1. Todd Borlik –“ How many people can stand on the earth? Malthusian Reckoning in Christopher Marlowe”

Lewis, Simon and Mark Maslin. The Human Planet: How We Created the Anthropocene. (London: Pelican, 2018). 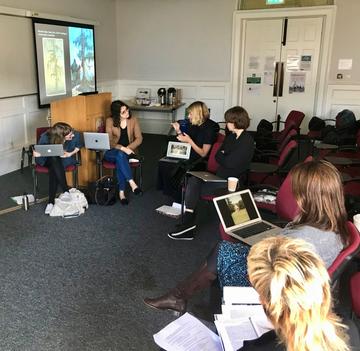