Elleke Boehmer is Professor of World Literature in English at the University of Oxford, an award-winning scholar in post-colonial studies.  Having served as chair for our launch In Conversation event with Aminatta Forna and for the first panel-led workshop in the Textual strand, she now joins us as a panellist in her own right for Textual 2: Community and Conflict.

Boehmer’s literary scholarship informs and is informed by her fiction writing.  She is the author of five novels—Screens Against the Sky (1990), An Immaculate Figure (1993), Bloodlines (1997), Nile Baby (2008) and The Shouting in the Dark (2015)—as well as a book of short stories, Sharmilla, and Other Portraits (2010).  Her themes are race and gender, nation and self, war and violence, oppression and refuge, all explored in the context of her entwined South African and Dutch heritages.

The scene that stays with me from The Shouting in the Dark, her most recent novel, is one in which the young female protagonist, Ella, is out for a Sunday walk with her parents and their dog in the pine plantations above Braemar, near Durban.  The South African landscape reminds ‘the mother’ (the parents are always ‘the father’ and ‘the mother’, the former an abusive veteran, the latter grief-stricken and ineffectual) of the Veluwe in the Netherlands.  The walk is therefore already imbued with competing memories and conflicting feelings when the dog, Bogey, a spaniel mix (another tiny example of complex genealogies), falls into a ravine.  Caught on a ledge, he is eyed by a lammergeyer, a bird of prey ‘big as a young baboon’.  Sunlight ‘glitters’ on the predator’s eye, a glint of cruelty.  The dog scrambles to safety; Ella, lying on her stomach to look into the ravine, notices a ‘strange overgrown insect’, something ‘between a beetle and a locust’—a specimen of what the bushmen call ‘goggas’.  For an instant ‘she’s here on her own, flush with the dust, lined up in a straight row with the lammergeyer and the gogga, both African natives, hardy and unkillable, just the same as she’.

Lammergeyer and gogga: how powerfully Boehmer translates systems of oppression into these creatures, how wonderfully evocative their names.  Lammergeyer (ˈlaməɡʌɪə/): the two-trochee word stretches out like the bird’s wings in flight.  Gogga (ˈxɒxə/): the conglomeration of consonants encapsulates the insect’s compactness.  Try both words on your tongue.  Deriving from German and Khoekhoegowab respectively, they oblige Ella’s two cultures to confront each other: both indomitable, magnificent, pain-inflicting.  As this example shows, Boehmer’s beautifully-wrought fiction proves that words matter.  It will be language that serves as Ella’s hope and strength as she comes to a sort of reckoning with the conflicts of her past. 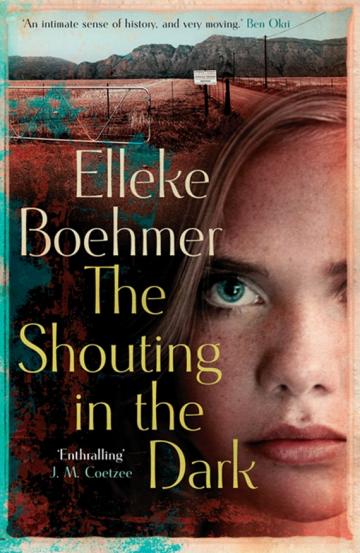