Émilie du Châtelet was a great many things: mathematician, natural philosopher, translator of Newton, successor of Leibniz and Wolff, lover and scientific companion of Voltaire, and various other sundry pursuits. She was not, however, nor is she today, widely considered as a contributor to the Encyclopédie. No mention of her is made in either D’Alembert’s “Discours préliminaire”, or in any of the other “Avertissements & Errata” paratexts that accompanied the Encyclopédie’s publication. Logically then, she is also not to be found in any of the exhaustive lists and inventories of encyclopaedic authors compiled by later scholars such as Richard Schwab and Frank Kafker.[1]

This accepted wisdom, however, is now being brought into question thanks to renewed interest in Du Châtelet not merely as a translator, commentator, or companion of great men, but equally as a significant intellectual force in her own right. Recent scholarship such as that by Koffi Maglo[2] has succeeded in challenging what had for centuries been assumed as Du Châtelet’s decidedly minor role in the encyclopaedic enterprise. More recently still, an international group of scholars came together in Oxford this past May for a study day on the subject of “Émilie Du Châtelet: Philosopher & Encyclopédiste”, a workshop aimed at unravelling Du Châtelet’s complicated and often overlooked encyclopaedic legacy.

We now know, for instance, that the unsigned article “Hypothèse” is largely drawn from Du Châtelet’s Institutions de physique (1740). Indeed, “Hypothèse” is one of seven articles that explicitly cites the Institutions de physique as a source. And, of these seven articles, “Hypothèse” is the only one that is not at least partially authored by Samuel Formey. Formey, it would seem, is largely responsible for Du Châtelet’s inclusion in the Encyclopédie, so much so that, according to Maglo, if one follows “les traces de Formey […] vous serez en compagnie de Mme Du Châtelet”. However, Formey’s role in the Encyclopédie is somewhat curious.

An exiled Huguenot pastor and perpetual secretary of the Prussian Academy of Sciences in Berlin, Formey had begun his own philosophical dictionary as early as 1742. By 1747 he had heard rumour about a French encyclopaedia project – which took as its starting point a translation of Chambers’ Cyclopaedia – and decided to approach its editor, then the Abbé Gua de Malves, offering his completed articles to the new enterprise. By 1749, the deal – executed by the libraires associéswho controlled the project – was finalised, and Formey sent the editors (by then Diderot and D’Alembert) some 1800 manuscript pages (petit in folio) in exchange for 300 livres; with the added proviso that the manuscript be returned to the author and that he be mentioned in the work’s preface.

It is thus presumably through the mediation of Formey’s articles that Du Châtelet’s Institutions de physique (one of Formey’s admitted sources for his articles on Metaphysics) came to be incorporated into the Encyclopédie. As such, most scholars have treated Du Châtelet as a secondary source for the Encyclopédie, and little more. But, digging into the issue a little, it would seem that the Du Châtelet/Formey relationship is rather more complex than we normally assume. Is this really just a simple case of an author (Formey) using a source (Du Châtelet) in order to bolster an argument or expand upon a concept? Or, as with “Hypothèse”, is there more to Du Châtelet’s presence in the Encyclopédie than we’ve previously admitted?

To answer these questions I compared a copy of the Institutions de physique found in the BNF’s Gallica digital library to the entire text of the Encyclopédie using a sequence alignment algorithm developed by the ARTFL Project.[3] The results, which will be published in full later this year, not only give us a better understanding of the extent to which Du Châtelet was used in the seven articles that cite the Institutions de physique, but also reveal a further six articles that make extensive use of Du Châtelet’s text with no attribution at all. Given both the scope and scale of these borrowings, whether cited or not, these new findings serve to complicate further the already nebulous notion of authorship in the Encyclopédie.

Take, for example, the article “Contradiction”, attributed unequivocally to Formey by Diderot and D’Alembert: “Cet article est de M. Formey”. Of its 338 words, 320 of them are drawn directly from sections 4 and 7 of the Institutions de physique, again with no attribution. To put this into terms perhaps more familiar to modern academic sensibilities, this means that Formey’s Turnitin-style “similarity score” for the article “Contradiction” would register at a rather alarming 95%. Indeed, all of the Formey articles we examined would score well above the 50% originality metric in terms of their similarity to Du Châtelet’s text.

Nor was this practice limited to Du Châtelet, apparently, as Alexander Bocast has convincingly demonstrated. Formey also makes quite liberal and unacknowledged use of Condillac’s Essai sur l’origine des connaissances humaines in his article “Définition”, for example.[4] All of which inevitably begs the question: should we continue to attribute articles to Formey that are drawn primarily from other sources? If not, to whom should we attribute them? Formey and Du Châtelet (or Condillac) together (in what order?); or Du Châtelet (and Condillac) alone, if above a certain threshold of borrowing? At what point does an article “belong” to its author as opposed to its source? And, on what grounds should one make these sorts of editorial decisions at all?

These questions all speak to the unique dialogical structure of the Encyclopédie and its multiple layers of authorship and authority. Contributors (both acknowledged and anonymous) would weave outside sources into their articles with varying degrees of attribution. These contributions would then often become the subject of editorial interventions on the part of Diderot and, to a lesser extent, D’Alembert. All of which makes the Encyclopédie a fundamentally “social” text, one built on the premise of philosophical conversation between the various members of Diderot’s “société des gens de lettres”, a microcosm of that larger international “Republic of Letters”.

Émilie du Châtelet was unquestionably a leading citizen of this Republic. And, while her contributions may be obscured by their apparent status as secondary source, new research such as that presented here is beginning to deconstruct this primary/secondary distinction in favour of a more expansive, and dialogical notion of encyclopaedic authorship. If Montesquieu is unambiguously considered as one the encyclopédistes thanks to his “contribution” of a single, unfinished posthumous article (e.g. “Goût”), then can’t we imagine an expanded author list for the Encyclopédie that makes room for Émilie du Châtelet, and doubtless many others? I, for one, would hope so.

But while we collectively might not yet be prepared to grant Du Châtelet full status as an Encyclopédie author (though I would argue that we should be), then, at the very least, we should do our best to make sure that she’s an acknowledged – and significant – participant in the philosophical conversation that the Encyclopédie enacts.

[3] This is the same methodology, in fact, that we used previously to examine the citation practices of the encyclopédistes. See Dan Edelstein, Robert Morrissey, and Glenn Roe, “To Quote or Not to Quote: Citation strategies in the ‘Encyclopédie’”, Journal of the History of Ideas 74.2, April 2013, p.213-36. 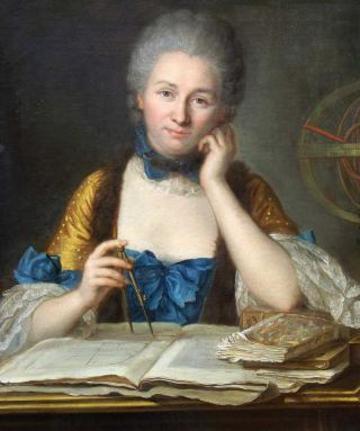