Eurozone(s): On Articulating Europe, and the Case of Greece

My talk in Oxford formed part—or indeed: was the beginning—of what I intend to turn into a sort of sporadic, or occasional, research project over the next couple of years. I have given this project the title ‘Eurozone(s)’, with the plural ‘s’ of the word in parentheses. What this is meant to signal is that I do not only seek to attend to the plurality and heterogeneity of cultural imaginaries of Europe—something that allows us to think beyond the narrowly economistic parameters of the notion of a single ‘Eurozone’—but that I also engage with specific, and often highly contested, forms of contact and transfer within and across the geographical, political and conceptual domain of Europe – that I move, as it were, within a ‘trans-European’ framework. It is this transcultural—literary, artistic, cinematic, and discursive—reflection, negotiation, and constitution or production of contested social, historical and political spaces that I am interested in: Europe, that is, as an ‘imaginary institution’.

One of the very appealing side-effects of this shared project of ours, for me personally, is that it provides me with an incentive to leave my disciplinary silo, and the textual corpus, of German Studies alone and to reconnect with a field, and people in a field—Modern Greek Studies—that since my undergraduate days in Oxford with Dimitris as my teacher has been of paramount importance not only for my decision to pursue a career in academia, but also for a particular way of thinking about texts, about the politics of texts, and about the demands and promises of cultural analysis – about all the things, that is, that are at the heart of this ‘Cultural Analysis Network’ we launched together earlier this year. Being in Oxford then, at that specific conference, for me was not primarily a matter of moving us towards a ‘less peninsular Modern Greek Studies’, as the title of the panel to which I contributed suggested, but also an invitation and an opportunity to extricate myself from—and to operate beyond—my own disciplinary insularity in German Studies.

My presentation at the conference was concerned with the ways in which contemporary fiction narrates Europe as a precarious domain for human praxis and political agency. Using Angela Dimitrakaki’s novel Αεροπλάστ (Aeroplast, 2015) as a case study, I focused both on the instantiation of a transnational territoriality in such texts and on their critical negotiation of the question of the possible ‘foundations’ of a shared European imaginary. Is there such a thing, I asked, as a shared foundation upon which the process of Europeanization and a concomitant sense of a shared political will in Europe can be built? If so, can such foundations be positive, or are they unthinkable without recourse to the catastrophic pasts of European history, of which the Holocaust, of course, is the most central and emblematic expression? And is there a form—and note the literary-aesthetic register here—for a European imaginary that would dispense altogether with the need for foundations: an anti-foundationalist, or more precisely a post-foundationalist and performative discourse about Europe in which Europeanness wouldn’t be something prior to its discursive institution, but the result of a contingent articulatory praxis that seeks to, and needs to, actualize itself ever anew?

It is the complex relationship between forms of contingency and articulation that marks Dimitrakaki’s novel in its interrogation of the conditions of possibility for the emergence of a progressive political will in Europe. By thinking together contingency and articulation (the latter to be understood as both a form of enunciation and the joining of disparate links), Dimitrakaki’s text, I argued, advances precisely such a post-foundational and performative model of political agency – a model that seeks to dispense at once with the regressive fantasies of a—national or otherwise identitarian—grounding of sovereignty in a European context, and with narratives of political estrangement or systemic autonomization that paralyze any orientation towards a shared European future. What is at stake here, ultimately, is the question of a political aesthetic for contemporary Europe.

Alexis Radisoglou is Assistant Professor in German Studies in the School of Modern Languages and Cultures at Durham University. He was part of the first cohort of Dimitris Papanikolaou's undergraduate students in Modern Greek at Oxford and, from 2016-2019, was a Fellow of Lincoln College and a member of the Faculty of Medieval and Modern Languages. 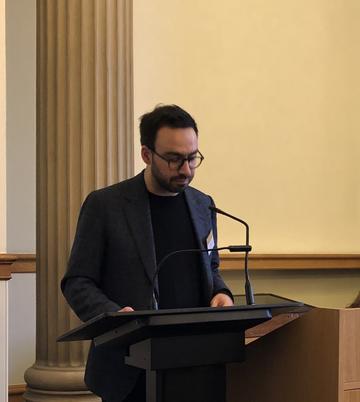 Alexis Radisoglou (Durham University) Eurozone(s): On Articulating Europe and the Case of Greece