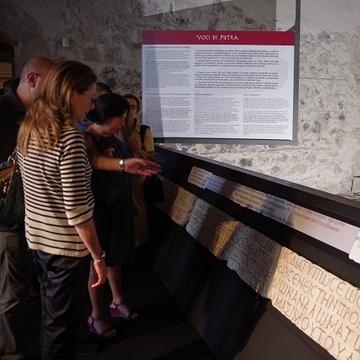 With the support of a KE Fellowship, Dr Jonathan Prag has been working with the City of Catania, the Civic Museum of Catania (Castello Ursino), the Italian CNR’s Institute of Cognitive Science and Technologies, and students and teachers of the Liceo Artistico Statale M.M. Lazzaro (Catania) to catalogue the collection of Roman inscriptions in the civic museum of Catania. Together, they have now created a permanent exhibition of a selection of the material in the museum for which research from the University of Oxford was key.

The exhibition was opened by the Mayor of Catania on 14 July 2017. The exhibition is entitled ‘Voci di pietra’ (‘Voices of stone’) and occupies three rooms of the Norman castle which is the civic museum of the City of Catania. The exhibition presents 35 inscriptions from the museum’s collection. Room 1 introduces the subject of epigraphy, and the languages of ancient Sicily, together with the collection of the museum. Room 2 presents examples of public inscriptions from the Roman colony of Catania, including statue bases, building records and imperial documents. Room 3 presents a selection of tombstones from the Roman city, pagan, Christian and Hebrew and includes a reconstruction of a Roman columbarium.

The materials for the exhibition were prepared under the direction of Dr Prag, but the majority of the design work and many of the individual elements (including videos and reconstructions) were undertaken by over 100 students from 12 different classes of the Liceo Artistico Statale M.M. Lazzaro, with the suppport of their teachers. The school has received a substantial prize from the Italian ministry of education, recognizing the project as the best in the Region of Sicily.