This project brought together four partners to document and exhibit the inscriptions of ancient Sicily. Across the region, centuries-old stones bear the markings left by previous generations. These are a vital part of Sicilian cultural heritage, which this project sought to preserve. One aspect of the project was to create a comprehensive and accessible online database of the inscriptions.

Jonathan Prag worked with the Commune di Catania, the Museo Civico Castello Ursino (where many of the most important inscriptions are held), and the EpiCUM project of the Italian CNR Institute of Cognitive Science and Technologies to build a searchable inscription catalogue. This was complemented by an initiative to bring local students from the Liceo Artistico Statale “M. M. Lazzaro” school to work in the museum.

A virtual exhibition designed by EpiCUM was integrated into the physical exhibition, which was eventually made available online. Jonathan says that the collaboration demonstrated the ‘enthusiasm of local audiences when given direct access to their local history and the ability to take a lead in sharing it with others.’

The exhibition has been made a permanent part of the museum’s displays, and other museums and universities are exploring the possibility of establishing similar projects elsewhere. The importance of the school’s involvement in the collaboration was recognised by a prize from the Italian Ministry of Education, Universities and Research, for being the best work exchange project in Sicily. The school put the prize money of €10,000 towards funding a trip to London and Oxford for students and teachers. 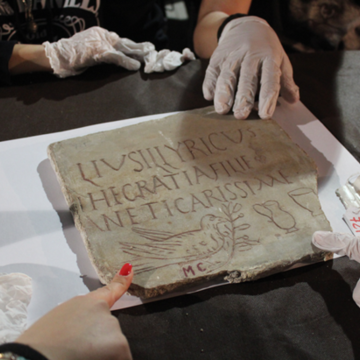