The reawakening of widespread engagement with the Black Lives Matter movement this summer has caused the heritage industry to reflect on their own institutional histories, as well as their collections, in relation to the experiences of black people. One of the ways in which the Trust has responded to this has been to complete a survey on its collections in order to gain a fuller understanding of what exactly they own that is connected with black histories, in particular those relating to the Atlantic Slave Trade and British colonialism.

This micro-internship provided students with the opportunity to contribute to this research. The briefing for this project raised immediate questions about what exactly we were researching and why. Initially, the other interns and I were asked to research the black presence in National Trust properties and collections, and this was broadened out to people of colour in order to incorporate a wider range of examples and to reflect the varied usage of ‘black’ over the past several hundred years.

Each of us were assigned a property in which a person of colour was thought to have resided or a set of paintings from the Trust’s collections which featured black figures. With limited resources, – five days to complete the research and little information available online – the classic limitations of the archive when trying to access subaltern histories were made stark. I was assigned a group of paintings, and often the figures depicted were anonymous, or only their names were known. The briefing for the project requested that our research bring out the experience of the individuals depicted and de-centre the histories of the white figures in the paintings, the artists, and the collection owners.

For the first couple of days I struggled to get past the art-historical interpretations of these paintings, which often brushed over the individual humanity of the figures depicted, focusing instead on their use as rhetorical features. Increasingly, research has pointed to the fact that despite this, many black people in eighteenth-century paintings were based on real people, and this is vital to interpret artworks without re-entrenching, or retrospectively creating, their dehumanisation. The Trust then added an extra item for research: a statue formerly displayed at Dunham Massey, which was removed from the gardens earlier this summer. The opportunity to research the statue offered one way to think about the more allegorical, abstract aspects of this history while being in dialogue with contemporary debates which are being led by black individuals today, about what these monuments mean.

The statue depicts a black African man, in a crouched, subordinate position, holding a sundial above his head. It is thought that it was originally created as part of a set of figures representing the traditional “four continents” of Africa, Asia, America and Europe. The idea of creating a figure who represented the people of a continent was tied to ideas about humans belonging in different groups, which became increasingly understood in Europe in terms of “race” by the end of the nineteenth century. The figure in the statue is also characterised as a “Blackamoor”, a recurring figure in European art since the Renaissance. The ways in which these figures enact racist imaginings have been increasingly recognised by scholars, although they are still produced and circulated , primarily among collectors, continuing the traditions that fed many of the collections associated with National Trust properties.

When researching the statue, I found many parallels with my initial research into the paintings, and with my own work on late-nineteenth century photography. The ways in which black people have been depicted in these different media have shared histories and continue to inform representations of historical and contemporary blackness. The Trust released its ‘Interim Report on the Connections between Colonialism and Properties in the Care of the National Trust’ this month, expressing a commitment to studying these aspects of its collections. The Trust have been engaged in research into colonialism in their collections for at least the past two decades, but this has recently become a central priority. I hope that the research I conducted and the resulting report I produced will aid curators at the Trust in understanding what this statue’s design was intended to convey, and the significances it held for people seeing it in the eighteenth century, as well as how it is seen today. The week was incredibly valuable, both because it gave me the opportunity to research something I had never studied before, which affected my thinking for my own doctoral work, and to meet different members of staff at the Trust who offered us great insights into the work that they do.

Rebekah Hodgkinson is an AHRC-funded PhD candidate in Archaeology at the University of Oxford working on a Collaborative Doctoral Award with the National Trust. She is researching colonial visuality in the Trust’s photographic collections. Rebekah is active on Twitter and Instagram at @beckyhodg97. 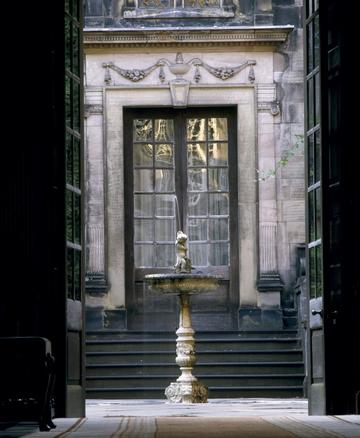