I received an Erasmus scholarship last Michaelmas term to complete research in Paris on African American writers who moved there after World War II. I waded through interviews they conducted with French newspapers about American racism, Communism, existentialism, and more.

Many Parisians were living in utter poverty, recovering from German occupation. Journalist Ed Clark wrote, they were “cold, hungry, confused and tired… too busy keeping themselves alive to bother much about entertaining.” White American GIs were disappointed, but African Americans loved Paris.

I could say much about debates these writers, which included Richard Wright and James Baldwin, had there with towering intellectuals from across the African diaspora like Leopold Senghor and Aimé Césaire. Or, I could go on about how racism increased in France against Algerians as they sought national independence, changing their idyllic view of France, and awakening them to international black struggles.

However, more than anything, my research taught me about the incalculable, unquantifiable value of freedom. This is precisely why the black American expatriates, unlike the white Americans, did not care that they were living in an utterly war-torn city in which they barely knew the language. As difficult as that was, they were free.

One man said in Newsweek in 1964, “Look, in the United States I’m just another nigger. Here in Paris, I’m ME.” Another said, “I never knew what freedom was until I came here.” Sixty years earlier Du Bois discussed the same problem of substantive freedom for black Americans. He asked in Souls of Black Folk, “How does it feel to be a problem?” In other words, how does it feel to know that your people are the scapegoat for all of your nation’s problems—a nation your people built it in slavery. He felt one could not escape this burden, save “perhaps in babyhood and in Europe.” Europe. Paris.

Richard Wright famously said, “I’ve found more freedom in one square block of Paris than there is in the entire United States.” Ollie Harrington, another postwar African American expatriate, could no longer take the ghettoes, which were not “only meant to restrict the movement and growth of bodies. It’s also been deliberately organized to stultify and even to deform black minds.” In Paris, these African American writers grew in ways that were impossible in the United States, and it was a joy to see how they flourished in that new environment.

Donald Brown is a History MPhil student who is currently doing research on a group of African American expatriates who moved to Paris after the Second World War.

Voices Across Borders is always looking for new Race and Resistance Research network members to contribute to this blog. If you would like to write a piece, or if you have a response to a blog entry you have read here, please e-mail the blog editor, Tessa Roynon, on  tessa.roynon@ell.ox.ac.uk. 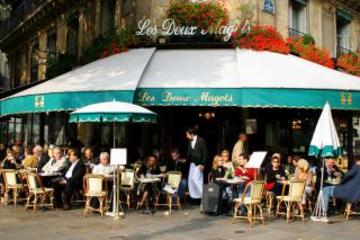