From Governmentality to Solidarity: Contemporary Art on the ‘Refugee Crisis’ and George Drivas’ Laboratory of Dilemmas

In the context of current trends in contemporary art on migration and in particular on the so-called ‘refugee crisis’ which reached a peak in 2015-16, my presentation undertook a close analysis of George Drivas’ installation ‘Laboratory of Dilemmas’ (2017): curated by Orestis Andreadakis and created for the occasion of the 57th Venice Biennale (May 13 – November 26, 2017), Laboratory of Dilemmas is a narrative video installation which was also later showcased at the National Museum of Contemporary Art (EMST) in Athens (March 29 – July 15, 2018).  The artwork consists of three components intended to be traversed by visitors successively: an upper-level walkway of screens, a ground-level labyrinth with inscribed text and audio, and a dark projection room located at the end of the maze right before the installation’s point of exit. The central narrative of the work is based on Aeschylus’ tragedy Suppliant Women (’Hiketides’) and restages an age-old dilemma: whether to offer refuge to the foreigner or keep her out to protect the native. This dilemma is played out in two distinct registers: not only in that of a millennia-old literary text, but also in a biology experiment designed to discover a treatment for hepatitis that was allegedly conducted in the 1960s.

Compared to other prevalent artistic representations which have responded to the ‘refugee crisis’, Laboratory of Dilemmas shares with them the objective of engaging the viewer, albeit in significantly subtler terms. However, it opts for a profoundly oblique approach which foregoes both indexical objects of refugeehood and any type of direct portrayal of migrants. Neither the figures of people on the move nor the residues of their journeys or their experiences are part of the work. In abstaining from any straightforward references, Drivas’ work constructs a complex fictitious narrative where past and present together with heterogeneous disciplines and visual grammars are interwoven, while the language of the documentary is only employed to be constantly called into question: although some of the filmed parts of the installation deliberately evoke documentary modes, they all show evident signs of fabrication.

My main argument is that Laboratory of Dilemmas diverges from most art on migration in one more aspect: stepping beyond both a claim to truth – common in documentary modes –  and the typical humanitarian/sensational paradigm, it manages, intentionally or not, to replot the encounter between foreign and native as an instance of potentiality and shared agency. In order to support the above claim, my analysis addressed the following questions: How do the themes of governmentality, biopolitics and hospitality come into play in the specific artwork? In what ways does Laboratory of Dilemmas undermine the dominant ‘foreign’/’native’ dichotomy and how exactly does it foster an alternative notion of agency between incoming and local populations? Taking stock of existing interpretations, I proposed a different reading that sees the installation overturning established paradigms in favor of a profoundly inclusive and relational perspective and thus suggesting one possible way contemporary art could intervene in discourses of crisis and migration without reproducing their main premises.

Anthi Argyriou is a Ph.D. Researcher at the University of Amsterdam (ASCA-Amsterdam School for Cultural Analysis), where she also teaches at the BA of Literary & Cultural Analysis. The working title of her research project is 'Mediterranean Drifts: The Aesthetics and Politics of Contemporary Art in Greece in the Context of the Refugee Crisis' and focuses on emerging modes of agency and representation of the migrant subject in artworks produced and/or presented in Greece between 2015 and 2018. She has organized and curated exhibitions in museums, art galleries and visual arts festivals, and has participated in the planning and coordination of educational programs and academic conferences. 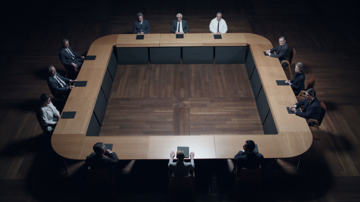