With more than 40 titles translated into more than 20 languages and several literary genres to his credit, Theodor Kallifatides is not a minor writer. But he is not just prolific: he is often cited as one of the most important Swedish living authors; the Swedish Academy has awarded him with the very prestigious Dobloug prize and he received the Greek State Literary Award for Best Testimony - Biography - Chronicle - Travel Writing; finally, he is among the bestselling authors of his Greek publishing house, an honor he shares with Kostas Tachtsìs and Petros Markaris. Despite his wide recognition, Kallifatides has not attracted the attention of the Greek literary critique, with few exceptions, mostly from Neohellenists working outside Greece. He is never mentioned among the most important Greek writers of the Postwar period – a list that usually includes other authors of his generation with whom he shares stylistic and thematic traits, such as Thanasis Valtinos, Ilias Papadimitrakopoulos, Menis Koumandareas, Vasilis Vasilikos, Giorgos Cheimonas, Kostas Tachtsis. And of course he hasn’t made his way in the literary canon.

What are the reasons for this exclusion? One is certainly the fact that his profile doesn’t fit the chronological and linguistic criteria established by the Greek scholarship: his career began in 1969, but his first books were published in Greece since the 1980s, and they are not considered to belong to Greek literature because they were translated from Swedish. He only started writing in Greek in 1994. Another reason might be the general introversion of the Greek literary critique, and the limited interest it shows for materials produced outside of the national borders; but maybe there is also a third reason, related to the theme of his works: although Kallifatides can certainly be defined as one of the most famous Greek writers abroad, he is not one that has been praising his country of origin to the foreign public.

The paper I presented at the “Modern Greek Studies in the 21st Century: Perspective and Practices in Cultural Analysis” conference is part of a wider research project exploring Kallifatides’ work along the five main axes of autobiography, gender, trauma, intertextuality and language, with the aim of highlighting its literary and political value. The perspective of the research is offered by Postcolonial Studies, a framework that allows to focus on the political aspects of the author’s oeuvre, and to read it not merely as a personal artistic expression, but also as a series of cultural products striving to concretely impact Greek and Swedish cultures and societies, by producing a narrative on both cultures and their encounters, and by mutually exposing the one to the other. In order to carry out an in-depth reading of the author’s production and fully understand his project, the national literary perspective needs to be overcome in favor of a transnational approach, whereby his work is considered as an inseparable whole instead of dividing it in two parts on the basis of language.

The use of the postcolonial lens, as well as the transnational approach, challenge disciplinary boundaries and use theory as a means of interpretation and as a key to further understanding; but they could also become the starting point for the elaboration of new ways to address the production of other post-war (and even contemporary) Greek writers who dealt with issues regarding the representation of Greek national identity or with intercultural meetings, whether related to different forms of expatriation – exile, migration, travel, tourism and others – or to encounters on Greek land – Occupation, tourism, incoming migration etc. The Cultural Analysis Network born with “Rethinking Modern Greek Studies in the 21st Century”, with its attempt to build and interdisciplinary, critical, wider field of Modern Greek studies, could be the perfect environment where to develop and enrich this perspective.

Francesca Zaccone (PhD) is currently non-stipendary fellow of modern Greek language and literature at Sapienza Università di Roma, and a founding member of the Laboratory of Intercultural Studies in the same university. She is a translator of contemporary Greek literature into Italian. Her research interests include gendered approaches to contemporary Greek literature and culture, Education Studies, Translation Studies. 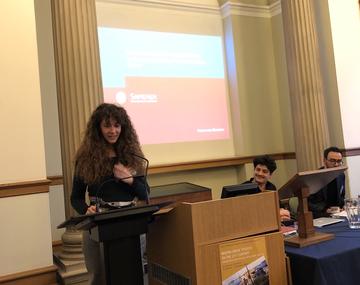