Fungus and fertility in sixteenth-century French poetry: how is a poem like a mushroom? - 28th May 2019

Poetry is strongly connected to plants in the imagery of the French renaissance: in 'manifestos' written by poets of the period, leading writers proposed planting a new garden of poetry, and used images of pruning, weeding, and grafting to describe their project of nurturing a language and literature capable of rivalling and outstripping their ancient Greek and Roman forebears. In his Defence and Illustration of the French Language (1549), Joachim du Bellay, one of the celebrated group of French poets known as the Pléaide, sets out a utopian vision of the French linguistic poetic landscape, one that would emphatically launch the French language, literature, and nation to cultural greatness:

‘So I can say of our language, which is still beginning to flower, without yet fruiting: or rather, like a plant or seedling, has not even flowered yet, so it has not yet brought forth all the fruit that it may yet produce. This is certainly not through any default of its nature, [which is] as apt as any other to produce: but it is the fault of those who, having guard of it, did not cultivate it sufficiently: so, like a wild plant, in that desert, where it had begun to grow, never watering it, pruning it, nor keeping back the thorns and brambles that cast it into shadow, they let it grow withered and almost die. And if the ancient Romans had been so negligent of the cultivation of their language, when it first began to grow shoots, it is sure that in so little time it could not have grown so big. But they, like good farmers, took it from a wild place to a domestic one: then so that it could fruit sooner and better, cutting the useless branches back, and replacing them with grafted, domestic ones, magisterially taken from the Greek language, which straight away were so well fastened, and made [to look] like their [new] trunk, that from then on they did not seem adopted, but natural.

The time will come (perhaps) when… our language… which is just beginning to put down roots, will emerge from the earth, and grow to such a height, and width, that it may equal even the Greeks and the Romans, producing like them Homers…’

By the end of the sixteenth century though, such an optimistic vision seemed far-off: the civil wars that began in 1562 had continued on and off for decades, and to think of a French nation united by its shared language and literature seemed deeply ironic. Agrippa d'Aubigné, a fervent supporter of the reformist (Protestant) side in the civil wars, began to compose a poetic reflection on the civil wars in the 1570s, while he was fighting in them. The resulting work, Les Tragiques, was not published until 1616, but has become known as probably the most vivid literary account of the conflict. D’Aubigné, like all writers of the period, drew on his poetic forebears, including the Pléiade poets, whose imagery he was happy to adopt and adapt, despite his religious and political opposition to their Catholic loyalties. One critic, Frank Lestringant, has described this as a ‘trashing’ of the landscape earlier tended to by d’Aubigné’s poetic predecessors; in particular, Pierre de Ronsard.

For d’Aubigné, the disintegration of the usual ‘healthy’ social organisation of the nation is imagined and described as a diseased body. The only element remaining of the fertile ground of France evoked by Ronsard and others lies in the putrefaction of this ‘body politic’, whose humours have become unnaturally and irreversibly mingled together.

(Its body is conflicted, pitted against itself:

it has little pure blood, phlegm and choler

make its blood blood no longer ; the people overthrow its laws,

all are noblemen and kings, without noblemen, without kings;

the mass degenerates into melancholy;

This belly into which all is drawn, everything enters,

this treacherous dispenser of the public excrements

no longer sends the rightful nourishment to the peripheries:

the bones of the arms and legs are without marrow,

all that now goes above to feed the brains

is a poisonous vapour, and the brain feeding on this

takes on substance and humor from a rotten mushroom.)

In this bleak vision, the nation is zombie-like, its brain replaced by a fungus, itself growing on the rotting flesh of the rest of the body. 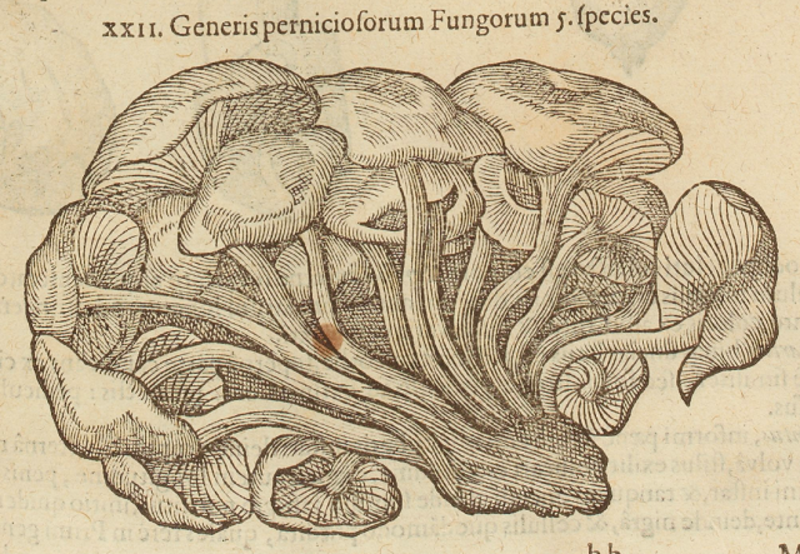 On the level of the poem, we might say that while Ronsard, du Bellay and others earlier planted beautiful poetic meadows and gardens, d’Aubigné’s writing itself feeds, mushroom-like, on what he sees as the rotten state of affairs. His language and imagery proliferate in twisted ways, flourishing in the dark and violent context of the French civil wars.

In our conversation at the SciPo roundtable, the discussants also wondered: if this poem is like a mushroom, how on the other hand might a mushroom be like a poem? One participant recounted an anecdote about the waters of a tsunami in Japan distributing the spores of cultivated shiitake mushrooms to land beyond the confines of the farm it was growing in. What was the farmer’s loss was the locals’ gain, and the reach of the sea waters brought in my the tsunami could be mapped by tracing the location of the shiitake now growing ‘wild’ in the forests around the farm. Might poems, like these mushrooms, be thought of as springing up unexpectedly in response to changing realities? The tensions of poetic inspiration and labour might seem to resonate with the efforts of the farmer and the irrepressible fertility of those spores, springing up in unexpected places and inviting locals to look at their landscape anew, even in the wake of disaster. If the poets of the Pléiade envisioned a systematic programme of poetic ‘gardening’ and composition, they could not have predicted the wilder ways in which poetry of the later sixteenth century, and beyond, would spring forth beyond the bounds of their formal and stylistic ideals. 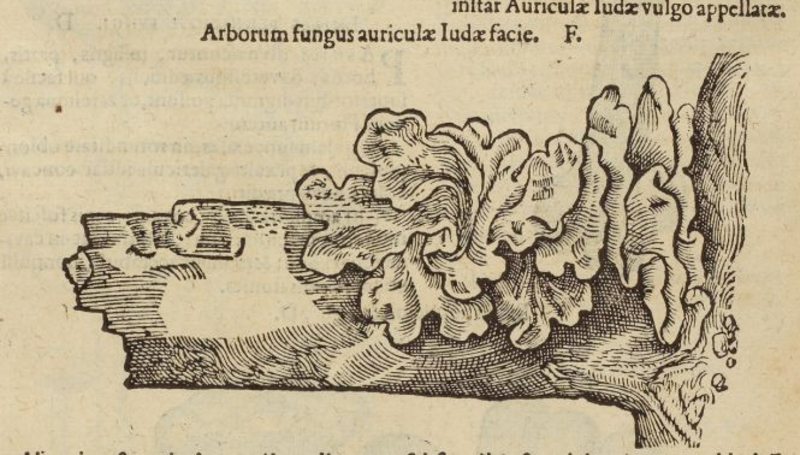 Dr Jennifer Oliver is a specialist in early modern French literature and culture. Her first book, Shipwreck in French Renaissance Writing: The Direful Spectacle, will be published by OUP in August 2019. Her current research investigates the connections and tensions between nature, technology, and poetics in early modern France. 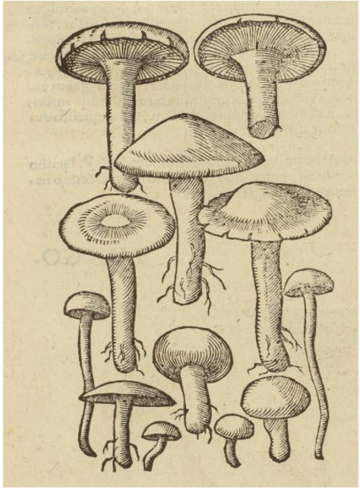