Giving voice to people who are no more

Jonathan Dove on the Role of Music in Commemoration, Reconciliation and Reconstruction

The launch of the Post-War Series’ aural commemoration strand offered the audience insight into composer Jonathan Dove’s views on music and commemoration as deeply intertwined social concepts. In an insightful and thought-provoking conversation with Dr Kate Kennedy, Dove explained the role of music as intuitive and sensational experience in remembering conflicts. In this sense, particular commemorative music may embody and transfer meanings more holistically than words are able to do, surpassing immediate cognition. Dove gave a stark example when discussing his experience in composing For an Unknown Soldier (2013). In his approach, he was torn between using verbatim the words from letters written by WWI soldiers or distilling the soldiers’ stories into an essence. Dove opted for the latter, as he intended to create a reflection of the soldiers’ stories, giving voice to people who are no more. The soldiers’ stories were transformed in this way to something more than an accumulation of words. The musical texture, Dove argued, overcame the hollowness of words and revealed what was being said on a different level. Working with the Portsmouth Grammar School choir allowed Dove to stress meanings more holistically by contrasting war poetry with vulnerable children’s voices and their innocent imagination of war.

With For an Unknown Soldier, Dove thematised the expression of grief for the multitude of soldiers who had fallen in WWI. In a previous work, he also explored the massive societal grief expressed for one person – Princess Diana – in his TV opera When She Died…, first broadcast in 2002. Dove explained the process in which he moved from the sublime, to the ridiculous, to the grotesque by considering both the individual and the epic. Shifting between expressions of grief on the micro-individual to the macro-societal level allows the viewer to look at the universal through individual forces.

With the more recent project In Damascus (2016), Dove’s intention was to allow the voices of Syria to speak. He worked on translated transcripts from Syria Speaks, a 2014 collection of writing and art. Having been to Syria himself before the conflict started, Dove wanted to provide space for people who stand in the streets of Syria. Selecting a poem by Ali Safar, he captured the vigilant normality and the anger inherent in the text’s very sparse words.

Music, in eliciting pre-cognitive empathetic responses, may therefore contribute to reconciliation by opening up societal spheres which contribute to understandings of ‘the other’, as well as through emotional catharsis and emotional liberation.

You can watch the full conversation here. 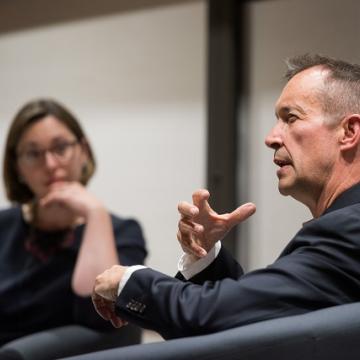