Global Histories at Knole and Hatchlands

The National Trust’s report into the links of its properties with slavery and colonialism has recently attracted great attention. Though research into global histories is not new for the National Trust, recent events have added imperative to making these histories publicly accessible – particularly as properties start to reopen their doors after months of closure. In light of this, in September I and eleven other students undertook a one-week remote curatorial research internship for the National Trust Partnership, a collaboration between the National Trust and University of Oxford run by Alice Purkiss and Hanna Smyth. Interns were divided into two teams, some focusing on National Trust collections while others – including myself – explored properties and places. Yet we all shared a common goal: to discover more about the presence of people of colour.

I was assigned two properties to research, Knole in Kent and Hatchlands Park in Surrey. Knole was built by the Archbishop of Canterbury in the 1450s, and after passing through royal hands it entered the Sackville family in the early seventeenth century. Meanwhile, Hatchlands was built in 1756 for Admiral Edward Boscawen and his wife Fanny. On receiving summaries of existing research into people of colour at each property, I was granted freedom to follow up lines of enquiry as I saw fit. Since the project centred on marginalised histories, this flexibility was critical - albeit initially overwhelming. It was all too easy to become side-tracked by owners’ colonial activities, which were - unsurprisingly – better documented than the people of colour who formed the basis of the internship. Through regular meetings, we were encouraged to think more deeply and creatively about how to get beyond owners to the people of colour in their households.

For Knole, I prioritised two early-seventeenth-century black servants called Grace Robinson and John Morockoe. On starting research, I was pleasantly surprised to find they had been discussed by various historians. This initial optimism faded as I realised all works relied upon the same source: a seating plan for 1613 to 1624, noted in the diary of Lady Anne Clifford, wife of Richard Sackville. Lady Anne included ‘Grace Robinson, a Blackamoor’ at the laundry-maid’s table and ‘John Morockoe, a Blackamoor’ with the kitchen and scullery staff. I wondered what could be learnt about Robinson and Morockoe from a list of names produced by their mistress and spanning only a decade of their lives. Yet since further investigation yielded no new primary sources, the seating plan was all I had.

While difficult to draw firm conclusions from the seating plan, it is possible to speculate. For instance, the way Robinson and Morockoe were seated alongside the other servants insinuates they were integrated into – not marginalised from - the Knole household. Certainly it is frustrating that so much remains speculative or unknown, however it would be wrong to expect the stories of people of colour at country houses to conform to the standard template of owner-family narratives. Rather, as Alice Purkiss reminded us throughout the week, absences are themselves fascinating.

Equally fascinating was the interest taken by later Sackville generations at Knole in Robinson and Morockoe. Both featured in Vita Sackville-West’s 1922 history of Knole. Indeed, some of her far-fetched claims produce the intriguing suspicion that Robinson and Morockoe were incorporated into family legend over the centuries. Moreover, Sackville-West’s lover Virginia Woolf featured a black servant named Grace Robinson in her 1928 novel Orlando. The current interest in recovering histories of people of colour is undoubtedly different from this, yet is not a wholly new phenomenon.

Thus I was surprised at the comparative lack of interest in the stories of people of colour at my other property, Hatchlands. I chose to focus on Tom Pride, an enslaved child ‘gifted’ to Fanny Boscawen in 1748. He was not mentioned by historians or later Hatchlands generations. There were some contemporary references to him, though the closure of archives and libraries due to the pandemic meant some of these sources were inaccessible. The disparity in historiographical interest reinforced the imperative (and complexities) of diversifying narratives at National Trust properties, while also underscoring the varied experiences of people of colour at these properties – during their lifetimes and afterwards.

The internship therefore illustrated the crucial part played by country houses in the construction of social hierarchies, as well as the vital role of people of colour in the histories of these houses. That research findings will feed into ongoing work by the National Trust to reinterpret its collections and places made the internship all the more exciting. The experience provided wonderful insight into curatorial research and the heritage sector, and I am very grateful to the National Trust Partnership for the opportunity to participate in such a fascinating and pertinent project.

Lara Garrett has recently completed her history undergraduate degree at Mansfield College. Her research focused on the intersections of childhood, gender and agency, and she was awarded the Arnold Modern History Thesis Prize for her dissertation on fin-de-siècle schoolgirl magazines. She hopes to continue exploring these research interests through a masters degree. 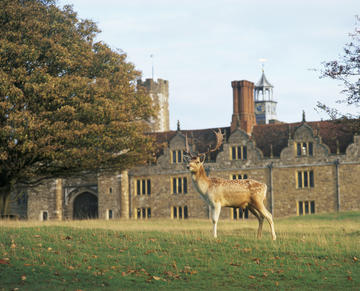