Global Hungers: The Problem of Poverty in Postcolonial Literature

‘Oxford’, Professor Ankhi Mukherjee noted in her opening remarks ‘is not a house of ‘hunger”. She meant the University of Oxford. As for the geographical Oxford, ordinarily, the fabled ‘South Park view’ shows the dreaming spires encroaching a leafy horizon — spiky reminders of the mythic and affluent university a short walk away across the grass. And yet, Oxford is a divided city. As reflections during the day reminded us: there is another Oxford, a city suffocated by exorbitant house prices, high levels of suburban poverty, and sky-rocketing homelessness. It is perhaps between these two Oxfords that this one-day conference balanced, funded by the AHRC and TORCH, the Oxford Research Centre in the Humanities, hosted by the Faculty of English, and organised by Ankhi with Dr David Barnes. ‘Global Hungers’ marked the end of Ankhi’s AHRC-funded project that has taken place over the last eighteen months, ‘The Psychic Life of the Poor: A City Unseen in Mumbai, London, and New York’. Concerned with race, gender, migrations and refuge, and the financial and psychological deprivation engendered by the uneven global economy, the conference invited an interdisciplinary discussion centred on the multivalent intersections of poverty and postcolonial literatures.

Ankhi implored the participants of ‘Global Hungers’ to ask urgent questions about hunger and material impoverishment, and to think through hunger too as metaphor, as allegory. Enriched with addresses from key figures in postcolonial studies and psychoanalysis (Robert JC Young, Honey Oberoi Vahali, Gayatri Chakravorty Spivak, and Leela Gandhi), ‘Global Hungers’ brought together scholars from South Asia, Europe, Australia, North and South America, Southern Africa and East Asia, to interrogate the confluence of these salient questions.

Opening the conference with a keynote inspired by the conceptual weight of absence, Professor Robert JC Young noted the adaptability of language in his address focused on the power of the word ‘hunger’ to ‘metaphorise’ in literature. The word ‘transfuses for new meaning’, signifying not only the state of physically needing food, but also hunger as desire, craving, poverty, ambition, and lack in other forms and languages, such as ‘soif’ (thirst) in French. ‘Poverty’, Young noted, ‘fails to transmute the way hunger does’. Positing the problem of capturing metaphorical poverty in conceptual ‘hunger’ in literature, Young asserted the importance of considering what is elided in narratives of poverty – usually class and experiential knowledge. In a reading of the almost-mythic blues guitarist Robert Johnson’s love song ‘Love in Vain’, Young suggested that the very precarity of the lives evoked in the verse of the song implies a metaphorical hunger perpetuated by systemic injustice and racial discrimination in the American South. The implication of this reading, Young suggested, is that poverty is the absent present in the text of the impoverished artist because it is a condition of their being. Referring to Camus’ musings on the intellectual capacity of the poor, Young noted the French writer’s pessimism about his own working class family’s memory, and drawing on this he highlighted the problem of the romanticisation of poverty in narratives of those struggling to survive. The absence of a clear articulation of this struggle in the voices of the subaltern, the lack of ‘subaltern consciousness’ in Johnson’s blues as Young pointed out, is indicative of the very existence of that economic, racial and social alterity that defines the violence of the impoverished subaltern’s experience.

Turning the conference’s attention to the psychological consequences of poverty, Professor Honey Oberoi Vahali suggested that at the heart of human violence lies a propensity to conceptualise the world in rigid polarities and binaries. Such polarities elide our need to address the consequences of the economic marginalisation created by structural and class-related poverty, by creating an other. Vahali reflected on her own work as a clinical psychoanalyst with Tibetan refugees, for whom hunger is a mental as well as a physical deprivation—as is homelessness—and for which the refusal to forget and assimilate into host nations are acts of political and personal protest. Tibet, she gravely reminded us, is the largest colony by territory on the planet.

Both of us attended ‘Urban Precarity’, a panel that examined the aforementioned superimposition of wealth and poverty in urban landscapes. Professor Elleke Boehmer and Professor Pablo Mukherjee co-presented a paper that presented Oxford not only as a city constituted by the coexistence of wealth and abject poverty, but as a city of planned violence, divided in its nineteenth-century design, for instance, to separate the rich northwest from the poor southeast, Magdelen College Bridge both conduit and barrier between these two halves of the city. In this way, Oxford is intelligible through its divisions, like Johannesburg or Delhi.

Dr Dominic Davies then turned the panel’s attention from the form of the city to the form of the text, noting the structural violence possible within a text. Davies read Katherine Boo’s Beautiful Forever within the framework of Spivak’s ‘Can the Subaltern Speak?’, arguing that the structuring of this ‘non-fiction’ text in the form of novel reflects an intersection between the contemporary mode of ‘urban governance of aesthetics’ in Mumbai and the rise of non-fiction about India.

Drawing the panel to a close by considering the productive possibilities of urban protest against the circumscription of subaltern lives, Maria Luiza Tucher Perciano Belo, a master’s student at Paris VIII, presented a fascinating narrative of the Vila Autódromo and the women’s protest there against ineffective urban planning that produced poverty and ignored infrastructural requirements. The connotations of disorder and lawlessness that surrounds informal dwellings, Belo noted, suggests a need for containment and intervention, which these women successfully resisted.

In her highly anticipated key-note address, Professor Gayatri Chakravorty Spivak ranged over concerns of translation and that which is encompassed by the word ‘hunger’, noting that we can ‘translate the difference between the rational and the reasonable in all of the languages of the world’. Advocating for ‘slow thinking’ in the Humanities, Spivak drew strands of Derridean thought together with personal anecdotes of contemporary gender politics and questions of privilege to discuss how we might view the intersections within the experiences of the subaltern. “Hunger”, in Spivak’s reflections, ‘is not merely a word, but an unmediated signifier of the body’.

Had time allowed in the programme we would have liked also to attend the other panels. These ranged across concerns such as: the consequences of the Partition and literary representations of it; class and hunger in world literature from China, Southern Africa and Latin America; and the intersections between animal studies, modernism and empire. The diversity of the conference participants and attendees—including a fifteen-person strong contingent of undergraduates and participants in the related ‘Humanitarian Fiction’ graduate workshops—speaks to the horizontal orientation of the day. The conference was concluded with a dinner at Ankhi’s own Wadham College, accompanied by lively discussion, but also pensive reflection over such wonderful food, and our access to it.

The Psychic Life of the Poor 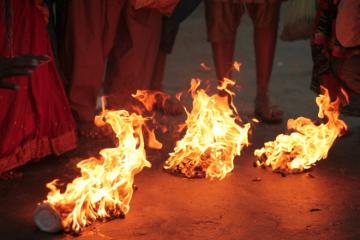