Like mayflies which live only for a day, some words have a single attestation in the surviving written records of English (at least as far as current searches can ascertain). The Middle English Dictionary is careful to record these one-off words in medieval English. It gives entries, albeit very brief ones, to the rarest words, allocating them the same status (at least in one way) as the most common words which have very full entries. So why are we so fastidious about, and why should we be interested in, this most ephemeral of language?

Sometimes these one-off words come about by chance – a word might have been widely used in day-to-day speech but only got snagged in writing once. Sometimes the opposite happens: a word is deliberately invented by someone at a particular moment for a particular purpose. This latter kind are called nonce words, named by the Victorian lexicographer James Murray after the phrase ‘for the nonce’ (i.e. for a specific, one-off purpose).

Some of the most deliciously odd nonce words in the Middle English Dictionary — words like ‘glope’, ‘pransawte’ or ‘twyfyls’ — are preserved in the late medieval Towneley Plays, named not for their place of performance but for the owners of the manuscript in which they are collected. Once thought to be a cycle of pageants performed in Wakefield in West Yorkshire, it’s now recognised as ‘a disparate collection of plays, of varied origin and production requirements’. 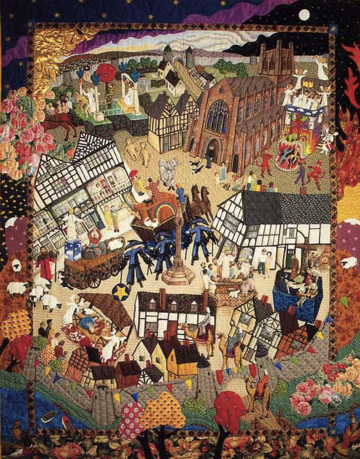 A quilt by B J Elvgren depicting the Chester Mystery Plays

Wherever the plays came from, their authors had to meet the demands of writing verse drama in long stanzas requiring lots of rhymes. While many poets nowadays veer away from full rhymes as a matter of style, medieval verse-dramatists bend words or invent words to arrive at rhyme no matter what. So in ‘Herod the Great’, the invented adjective ‘myghtyus’ (i.e. mighty-ous), rather than the usual ‘mighty’, is formed to rhyme with ‘gracious’. Or in the ‘Judgement’ play, the compound adjective ‘ill-dedy’ (i.e. ‘ill-deed-y’), describing those who are sinful, is coined to rhyme with ‘greedy’ and ‘needy’.

What would an audience think about these coinages? Would they notice them as new or unusual? These plays were written before the first dictionaries, so perhaps anything goes. Yet the playwrights seem to bend language for oddity and amusement’s sake. Can one be ‘deed-y’ in the same way that you are ‘greed-y’ and ‘need-y’? ‘Mightious’ isn’t exactly like ‘gracious’ because we have ‘mighty’ already. Like a grotesque on a misericord or a weird scene in a manuscript margin, we might think of nonce words as ornamental deformations at the edges of verse and vocabulary, not accidental ‘error’ but wilfully ‘wrong’ invention.

My hunch is that medieval dramatists and audiences appreciated the very peculiar qualities of one-off words. When Herod is presented with the plan to slaughter the Innocents, he narrates his reaction with a one-off word rhyming with ‘hope’ and ‘pope’: ‘my hart is rysand / Now in a glope’ (meaning that his heart is aflutter). Middle English already has the verbs ‘glopnen’ and (much rarer) ‘glopen’, both meaning ‘to be afraid’. A number of Towneley’s one-off words are, like these verbs, derived from Old Norse, being Northern dialect words which don’t get recorded elsewhere in Middle English. But even allowing for that, I think this word is strange. Did you hear what he said? A glope! But what’s a glope? Is he emboldened or afraid? Herod becomes a rambling double-talker in a play that sits uneasily between humour and horror.

Folios 5v and 6r from Huntington Library MS HM 1, the manuscript of the Towneley Plays’

In the Doomsday play, the devil Titivillus (famous for collecting up mumbled prayers and chatter in church, and for making scribes make mistakes) helps other devils conduct an appraisal of the bad souls come for judgement. One devil mocks a sinner’s ‘pransawte’, a blend of ‘prance’ and ‘saut’ (meaning a leap or tumble) which describes quite perfectly those twirls of delight we make in a fancy new outfit. Tutivillus calls out a woman who wears ‘twyfyls’, which might be a lispingly pronounced ‘trifles’ or a mix of ‘twice’ and ‘trifle’, some adornment that comes in a pair. Nonce words like this represent the devilish abuse of language, and also the fashion and artifice which distracts us from what really matters and the ease of error. Yet, at the same time, they are highly evocative.

Towneley’s nonce words don’t get picked up and used elsewhere. Are they thus ultimately failures? My research on poetic neologisms suggests uniqueness was consciously preserved: poets often invent neologisms modelled on earlier examples but don’t so often repeat an earlier poet’s own nonce words. Remaining a mayfly is thus a mark of success. And maybe nonce words can have meaning in their near-meaninglessness, as revealed centuries later in Seamus Heaney’s lovely poem ‘Nonce Words’ (which you can read at the foot of this page).

Heaney’s speaker takes a wrong turn on a drive which leads to a snatched moment of contemplation parked up on a freezing day. In the cold, he seems to apprehend his own mortality. Shivering, he blesses himself in the name of ‘the nonce / and happenstance’, the chance that has brought him here. The title nudges us to spot Heaney’s own nonce creations. He, like the Towneley dramatists, exercises his right to personalise language, to invent words which live as briefly as mayflies or, as the poem tempts us to think, as briefly as humans and their creations, unique and ephemeral.  Yet thanks to the careful custody of lexicographers, nonce words can outlast their brief moment — how, Heaney asks, might we do the same?

Jenni Nuttall is a Lecturer in English at Exeter College, University of Oxford. She tweets and blogs about medieval literature at @Stylisticienne and stylisticienne.com, and has recently written about the history of gibberish for Aeon.co and History Today. 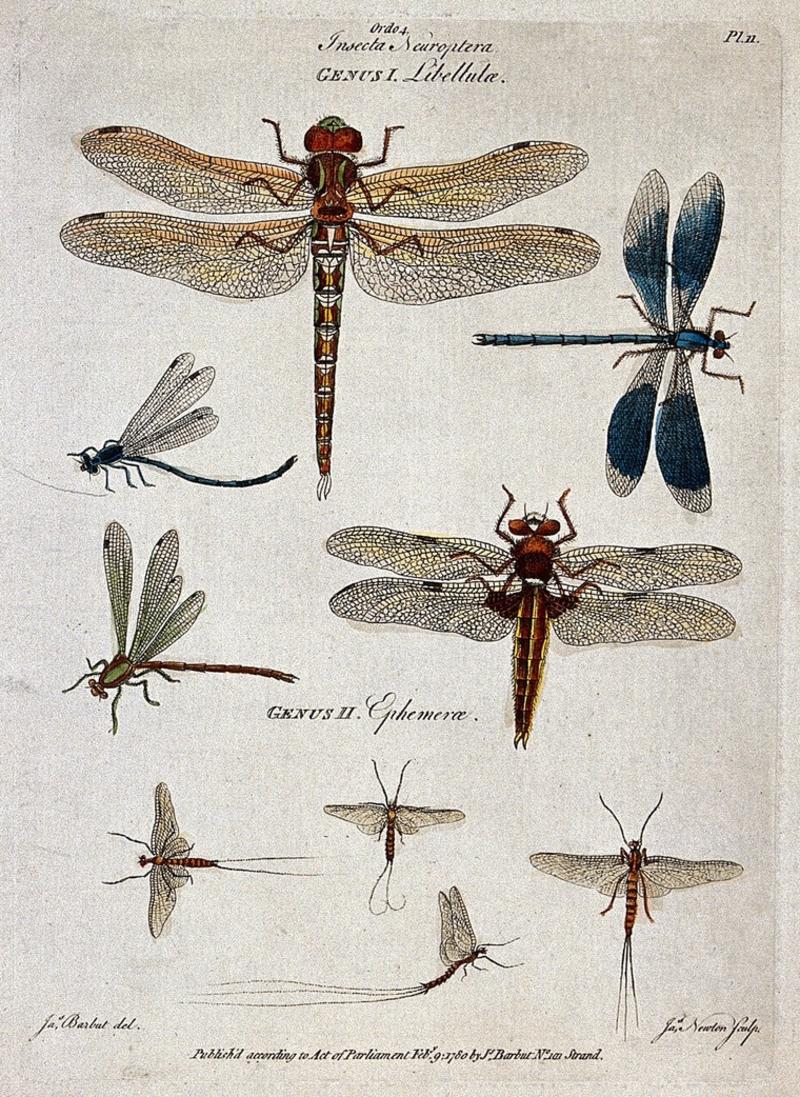