Hector is, in the Iliad, the great defender of Troy, whose death at the hands of Achilles forebodes the fall of his city. One eminent Greek historian of the last century noted that, according to local tradition, there had been a king Hector on the island of Chios c. 800 BCE: he argued that the local poet Homer (Chios being the best supported among the many places claiming to be Homer’s birthplace) gave his Trojan hero this name in memory of his own homeland’s Hector.  Nobody has believed him; but then it has been noted that, in the field of Homeric scholarship, most theories have only one adherent.  However that may be, subsequent ancient Hectors are scarce – only 15 so far in the LGPN, several of these in regions of north west Greece whose inhabitants claimed to be Trojan exiles by origin. (No doubt there were some in Rome too; but Covid-19 stops me checking.)

Gladstone, if my memory serves (Covid-19 again prevents me checking), described the Iliadic Hector as ‘the perfect type of the Christian gentleman’.  Another Victorian, the novelist and student of names Charlotte Mary Yonge, agrees: ‘perhaps the most endearing of all the Trojan heroes, from the perfection of his character in tenderness, devotion and courage.’  The magical scene in Iliad 6 where Hector’s baby son recoils in terror from the crest of his father’s helmet, which the hero then smilingly removes, was picked out by Erasmus in De abundantia as illustrating ‘pleasure derived from the gentle emotions’ in literature.

I was accordingly shocked when I first realised that the Trojan hero was the origin of the word ‘hector’.  We know this now as a verb, but it used also to exist as a noun meaning something like hired thug: the men employed by John Wilmot Earl of Rochester to beat up the poet Dryden might in contemporary parlance have been called his Hectors.  The gap between Gladstone or Yonge’s Hector and 18th c Hectors or modern ‘hectoring’ is so huge that I initially assumed the modern use (emerging it seems in the 17th c.) must come from some intermediate source.  But I have never managed to identify a candidate.  If one looks back at the Iliad in this light, one sees that Hector does indeed make several speeches that may sound like hectoring or worse: when, for instance, he threatens to run through the wise Poulydamas if he makes any more demoralising speeches (Iliad 12. 248-250).  But Hector is the man on whom above all the defence of Troy depends, and he has unreliable allies and a feckless brother, the charming Paris, to keep up to the mark.  Read sympathetically these outbursts show Hector living up to his responsibilities.  Hector is a tragic figure, not a bully.  Still, it looks as if it was the unsympathetic reading of the Iliad that brought discredit on his name.

That discredit is probably not the reason why the name has only had modest popularity in modern times (Italy is the exception, where Ettore is much commoner than Hector here, perhaps because of the Romans’ claim to be descended from the Trojans).  Within the United Kingdom it has been chiefly favoured in Scotland, and there it took root, according to those who know about these things, as a classicising equivalent to Scots Gaelic Eachaan or Eachdonn. Still, Hector is the only male Homeric hero apart from Odysseus in his Latin form (cf. Ulysses S. Grant) who has lived on at all in modern Anglophone naming.  It was a Hector, Hector Catling, whose excavations definitively identified the Menelaion at Sparta and even discovered dedications there to Menelaus and Helen, whose lives so disastrously affected that of the original Hector. 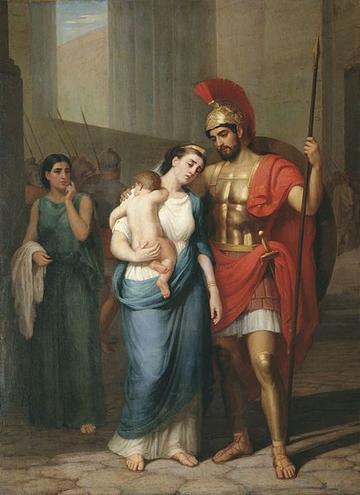