Hiphop, Knowledge and the Academy

It is not often that the University of Oxford gets to hear Kendrick Lamar booming out of the doors of one of its deconsecrated chapels, but following a seminar from Harvard’s Professor Marcyliena Morgan (Executive Director of The Hiphop Archive), students and academics alike left St Luke’s chapel wondering why this topic is not a part of the University’s curriculum.

With the extraordinarily successful turnout and surrounding discussion of the Race and Resistance Programme’s headline event on Friday 17th February, it would seem safe to assume that there are people in Oxford ready and willing to delve deeper to investigate the immense power of Hiphop and to fight for its place in the academy and for scholarship as a movement.

The standing-room-only crowd packed out the chapel on Friday afternoon, where Professor Morgan spoke on ‘Hiphop, Knowledge, and the Academy’ and institutions’ role in archiving the music of this genre.  Professor Morgan began the seminar by painting a detailed picture of the backdrop of the archive and her involvement with the Hiphop movement. She described how, while pursuing her own research interests and teaching on urban speech communities, her students came to her to highlight Hiphop’s importance as a culture, inspiring her to fight for its place in the academy.

Jazz may not have been archived until it had been in existence for a long time but the growing collection of the Hiphop archive, with its presence at one of America’s most prestigious institutions, ensures that the genre is being archived and remembered as it is happening at a certain point in time. The Hiphop Archive and Research Institute (HARI) was officially established in 2002 at Harvard University and since then, under the direction of Professor Morgan, HARI’s faculty and staff have worked to curate all forms of Hiphop sources, ranging from local to international, with the mission to ‘Rebuild, Respect, Represent’, to fully support a new form of research and scholarship centred on the incredibly influential genre.

Since the 1970s, Hiphop has been an increasingly influential social, educational and artistic movement for young adults. Professor Morgan showed the audience several testimonies of those who have been influenced by HARI and the power of Hiphop, citing three recurring expressions from its stakeholders: “Hiphop is my culture”, “Hiphop saved my life” and “I am Hiphop”. With the help of the institution in dealing with and supporting issues within their communities and youth, those who really believe in Hiphop are able to collaborate in ways where they can work, build and foster discussion. (And it is important to have these discussions now more than ever.) Professor Morgan reminded us that Black Lives Matter was a movement started in essence from the influence of Hiphop and its philosophy.

Professor Morgan’s talk was followed by a formal conversation, chaired by Imaobong Umoren, with three respondents, each with their own relationship to and interest in the archive and each with insightful questions for the Executive Director. Marquis Palmer again validated Hiphop’s importance, citing himself as an example of one ‘saved’ by Hiphop and asking Professor Morgan of her opinion of the role Hiphop has in the face of Trump’s America. Professor Jason Stanyek, interestingly addressed the way in which over the last fifteen years every discipline in the humanities seems to have begun its critique of Hiphop, but how the study of the music itself (which one would expect to be the primary site for interrogation) has been more problematic than should be the case. This echoed the questions of DPhil student, Louisa Layne, who asked Professor Morgan the question we all wanted to know the answer to: what do you think are the factors that made Harvard ready to receive this archive and will the UK, with its rich tradition of black music, soon be able to emulate this?

The seminar was followed with an informal Q and A and drinks reception in which the passions of the panel and the attendees was clear. Discussion ranged from the workings of the archive as a resource to questions regarding the state of the field of ‘Race and Resistance’ in the University more broadly. While some expressed despair at just how much work still has to be done to bring Oxford forward in diversifying its curriculum for mainstream courses, people were genuinely inspired by Professor Morgan’s optimistic outlook towards this. She cited her own position fifteen years ago as an example of just how much can be done in a short space of time with drive and determination.

The passionate interest in Professor Morgan’s seminar and the response since has proven that this drive and determination exists in Oxford. The next step should be to forge forward, trying to emulate the work of our transatlantic cousin and bring expertise such as Professor Morgan’s to the forefront of our curriculum.

Beth Kume-Holland is a researcher at the University of Oxford's History Faculty. Her current research is on race, religion and resistance in the United States. 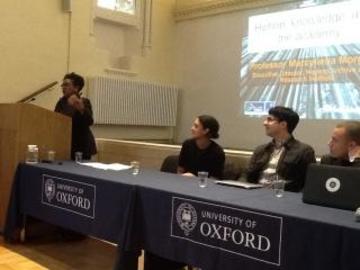