Romare Bearden, the Harlem artist whose paintings and collages were admired by so many literary giants of the twentieth century, from Langston Hughes to Albert Murray to Derek Walcott, is currently being celebrated at Columbia University (http://www.columbia.edu/cu/wallach/exhibitions/Romare-Bearden.html).  At the heart of the ‘Homer in Harlem’ celebrations is an exhibition of the artist’s works inspired by Homer’s Odyssey.  Bearden created the stunning series of collages in 1977; displayed in New York for a couple of months, they were soon dispersed around the globe, so the opportunity to see them gathered together again and masterfully curated by Robert O’Meally (Zora Neale Hurston Professor of English and Comparative Literature) is a rare treat.

Bearden developed his collage style in the 1960s, in the midst of the Civil Rights Movement.  The Modernist painters Picasso and Braque may have coined the term ‘collage’, but Bearden applied it specifically to the conditions of modern America. In an era when activists were protesting the segregation that is the polar opposite of a ‘collage’ society, he used his art to demonstrate the unity achievable when diversity is brought together; as Ralph Ellison would later remark in a memorial speech for Bearden, ‘we are a collage of a Nation’.

But why did Bearden turn to Homer’s Odyssey, that founding work of the ‘Western canon’?  One answer lies in the epic’s themes of homecoming, heroism, survival, and identity – all of which appealed to the African-American artist in the mid-twentieth century.  Another lies in the rich character of Homer’s hero, so frequently described by the Greek epithet ‘polutropos’ (the ‘man of many turns’ in the sense of ingenuity and improvisation, as well as of travelling), which - for Bearden - linked with traditions of African-American storytelling and jazz, another of his great loves (one of his jazz compositions was even recorded by Dizzy Gillespie in the 1950s).

What Bearden saw in Homer’s tale was not a European myth, but rather one that applied to humanity the world over.  All Bearden’s characters in his Odysseycollages, gods and men alike, are black.  In this way, he reflects on African-American life, while simultaneously divesting Homer’s work of the white veneer it has acquired since antiquity, and evoking figures reminiscent both of ancient Greek vase paintings and Benin art.  Bearden asks us to appreciate his collages on a multitude of levels; deeply political and awesomely beautiful, any opportunity to see these artworks up close is not to be missed.

Justine McConnell is a Leverhulme Early Career Fellow at TORCH, and serves on the steering group of the Race and Resistance network. She recently spoke on the Homeric 'collages' of Derek Walcott and Isaac Julien at one of the 'Homer in Harlem' events, and her book, Black Odysseys: The Homeric Odyssey in the African Diaspora since 1939, was published by OUP in 2013. 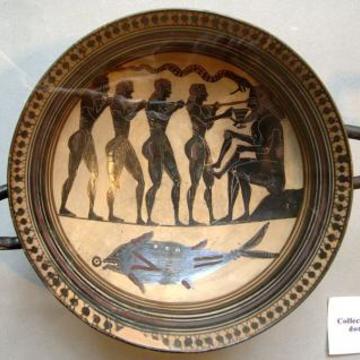