How learning Latin could change your life

Do you speak Latin? You probably do. If you’ve ever used a memo, or got a train via London, or watched Arsenal versus Watford, you’re a bona fide speaker.

Latin is everywhere, even though most of us don’t learn it at school. But researchers in the Classics in Communities project, based in the Classics Faculty, have been exploring how learning Latin at a young age can impact children’s cognitive development.

“There are so many benefits of learning Latin,” Dr Arlene Holmes-Henderson, a researcher in the project, says. “As well as being an interesting curriculum subject in its own right, it can also support the development of literacy skills and critical skills.”

As part of her research, she has been tracking groups of primary school students in Scotland, the West Midlands, Oxfordshire and London. She has gathered data about students’ reading and writing proficiency before and after they learn Latin.

The researchers have looked closely at socially and economically disadvantaged areas. There, they’ve found that learning Latin can have even more of a positive impact. “In these schools, learning Latin can make a significant difference to learners’ progress,” Dr Holmes-Henderson says.

And it’s not just academic—learning Latin can also help children develop cultural literacy, which enriches their understanding of the contemporary world by making them familiar with classical references. Has anyone ever told you to carpe diem? There’s that Latin again, encouraging you to seize the day.

There may be plenty to gain from learning Latin, but many children simply don’t get the opportunity to have a go at it. This is another area where Classics in Communities provides help.

“Since 2014, when Latin and Greek were named in the English National Curriculum as languages suitable for study in primary schools, we have been running training courses and providing support for primary school teachers around the UK,” Dr Holmes-Henderson explains.

Through the project website, Classics in Communities has been providing resources for teachers who have little experience of Latin themselves. This way, they hope that more and more primary school children will have the opportunity to learn.

And Latin can also be a lot of fun. “The legacy of the Romans encompasses literature, art, architecture, philosophy, history and language," says Dr Holmes-Henderson.

"Learning Latin helps young people begin to discover what life was like for the Romans. Graffiti from the walls of Pompeii are short and relatively simple, so even at primary school level, children can engage with some real Latin.”

If you like the sound of that, carpe diem, and try some Latin for yourself. Remember, audaces fortuna iuvat – fortune favours the brave.

Dr Holmes-Henderson’s book, Forward with Classics: Classical languages in schools and communities, will be published by Bloomsbury Academic this year (co-edited with Steven Hunt and Mai Musie).

This blog originally appeared on the University of Oxford Arts Blog and is part of the Artistic License series. 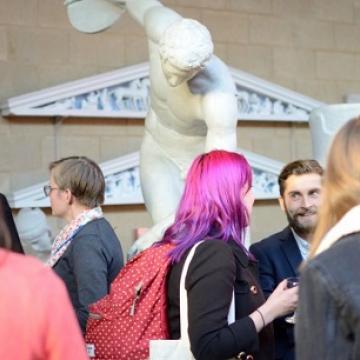