Blog originally published by The Conversation

Few would seriously dispute that human activities are causing climate change and destroying ecosystems. It’s less understood why people do these things despite knowing the consequences, and why we seem unable to stop.

Human disruption of natural systems is nothing new, and nor are the ideologies and political and economic systems that drive it. A new study published in Nature captured a moment in history when a small society of people transitioned from one way of living to another, transforming the world around them as a result.

Researchers discovered the rapid destruction of pristine forest to make room for cereal agriculture in 14th-century Poland by looking at information stored in peat bogs. Deforestation accelerated sharply when management of the land was taken over by the Order of St John – knights who had taken religious vows, fought in the crusades and helped colonise central and eastern Europe.

Also known as the Joannites, their concern was maximising profits from their new estates, believing it a moral duty to “clear” landscapes and make them “productive”. They set peasants to work uprooting trees, turning the bare soil with heavy plows and iron harrows, and planting cereal crops.

The research was carried out near Łagów, in western Poland, in an area of peatland that has been a nature reserve since 1970. Peat bogs are damp, acidic and low-oxygen environments that are hostile to bacteria and fungi. As a result, plant matter can accumulate here for centuries without decomposing. Researchers took peat core samples and used radiocarbon dating to establish a chronology of events. They analysed pollen, spores, charcoal particles, plant remains, and the single-celled organisms that inhabit the soil, which provided detailed evidence of environmental change. With surviving medieval written records and archaeological remains from the period, as well as evidence from documentary archives, the researchers charted the distribution, density and character of human settlements at the time.

With great clarity, the results showed how the onset of rapid deforestation affected the surrounding wetlands. From 500 AD onwards, the evidence alluded to a mixed broadleaf forest of hornbeam, oak, birch, beech, pine and alder, surrounding a wet alkaline fen. The numbers of each tree species and the density of the forest appeared largely stable until the arrival of the Order in 1350. At that point, sharp changes were discernible. 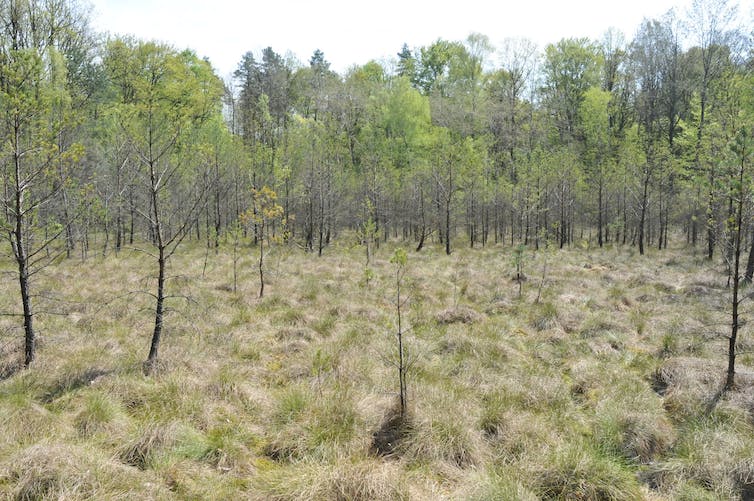 The green algae that thrived in the fen disappeared totally by about 1400, to be replaced by peat moss. Evidence for hornbeam, previously the most prevalent tree, together with birch, beech and alder, drastically fell over the same period. The only tree that prospered was pine, which dominated in the record as the other trees disappeared. Cereals were present from the beginning of the record, but their quantity suddenly increased from 1350. Coprophilous fungi, which grows on animal dung, wasn’t discernible before then, but makes its appearance around 1400, coinciding with the rise of animal husbandry.

Meanwhile, the destruction of the old broadleaf forests and the resulting soil erosion caused the fen wetlands to acidify, and eventually transform into peat bogs. The destruction of one habitat irrevocably altered another.

When the Order arrived in 1350, they enlarged the castle, built houses for servants and artisans, and created a commercial hub for the surrounding villages. Written records show how the land was parcelled among the peasant farmers who worked it for their feudal landlords, the Joannites. The peasants had to finance local churches and priests. Large farms were established with new farming practices such as three-field crop rotation. This all generated enough money to support the aristocratic knights, together with the priests, their church building, and perhaps more besides. 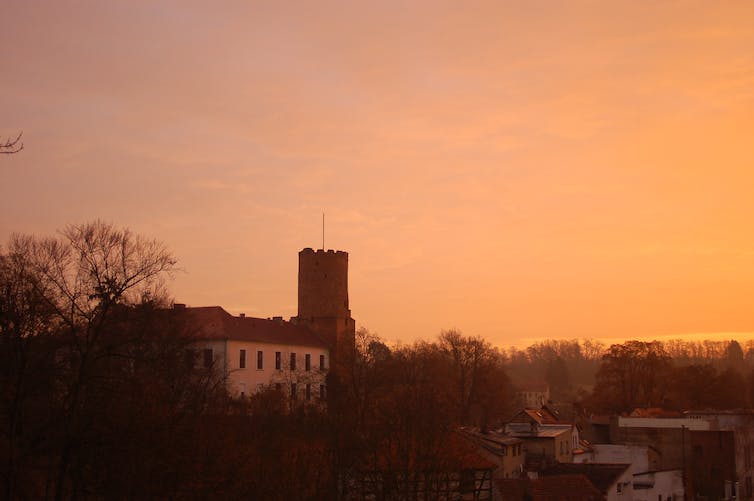 The castle in Łagów, 2 kilometres from the peatland, which served as the Joannite headquarters. Ryszard Orzechowski

The study traced the ecology of the region of Łagów from 500 AD, but evidence of permanent human settlements goes back as far as 1300 BC. For more than two millennia, humans managed to live in the region without deforesting it. What changed? Above all else, human ideologies.

Prior to being enveloped in the Christian kingdom of Poland from the late 10th century, and no doubt for some time afterwards, the Slavic communities who lived in the area were “pagan” – a pejorative label used by Christian authorities. Whatever worldviews or practices it might once have described were so thoroughly and violently erased that we cannot recover them with any confidence.

We do know that, in Christian eyes, pagans were too close to the natural world, too deferential to trees, springs, rivers and rocks. The archetypal image of the conversion of pagans east of the Rhine is that of the evangelising monk, St Boniface, hacking down an ancient and revered oak tree. In this story, the local population is so dismayed and awed as the tree crashes down that they immediately convert to Christianity. Boniface uses the wood of the tree to make a chapel. The alliance of warriors and missionaries intent on integrating the region and its natural resources into the Frankish Empire achieves another propaganda coup. 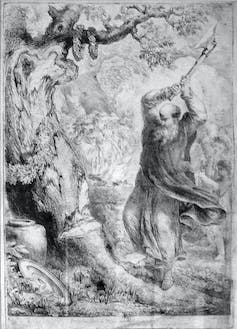 In the past, our understanding of “Christianisation” depended on such celebratory stories. They formed the foundation myths of modern Europe: a continent unified through conversion to a shared religion and a culture that harked back to imperial Rome. These ideologies underwrote later European colonialism, connecting notions of “progress” and “enlightenment” with rendering landscapes profitable to humans. Their potency has made us blind to reality.

This study shows vividly and poignantly that such ideas are, and always have been, inseparable from their environmental consequences. Through its findings, we can see the precise ecological effects of the replacement of an old, sustainable, “pagan” way of living in the forests and wetlands of the Łagów region. What we thought was profit turns out to be mostly loss.