We hope to see many of you at our next Discussion Group meeting this coming Monday (19 February, 12.45-2pm, St Anne's, Seminar Room 10 on the top floor in the New Library). We're excited to have Graham Riach, Lecturer in World Literature at the English Faculty, as our guest. As always, no advance preparation is needed, and free sandwich lunch, fruit and coffee will be provided.

A symposium held at the Institute of Modern Languages Research (IMLR)

This symposium will bring together scholars working on translingual women’s writing in the language fields of Italian, French and German. We will explore the particular richness of texts produced by writers in languages that are not their mother tongues. Among the questions we will explore are the following:

•                    What can translingual writing achieve that goes beyond the possibilities of texts produced by mother-tongue writers?

The symposium is conceived as a springboard for a larger international conference on women’s translingual writing, which is being planned for 2019. It is part of the AHRC-funded Open World Research Initiative project ‘Cross-Language Dynamics  -  Reshaping Communities’, generously supported by the Cassal Trust Fund and co-organised with the Centre for the Study of Contemporary Women’s Writing (CCWW).

All are welcome to attend this free event. Places are limited so please book in advance.

The focus of this interdisciplinary conference is to investigate the ambiguous relationship between the concepts of ‘Wandering’ and ‘Home’ by highlighting both the binary opposition of and the possible interrelations between the two concepts.

Many different types of homes and houses can be found in literature: the ‘gothic’ homes depicted in Emily Brontë’s Wuthering Heights and Edgar Allan Poe’s Fall of the House of Usher, the country homes of late-Georgian England that feature in Jane Austen’s novels, and the stifling atmosphere of the late-Victorian and Edwardian upper middle-class London homes of John Galsworthy’s The Forsyth Saga. Their role, in the history of literature, of symbolising family values, social status and the complex web of family relationships is clearly one of great importance.
Romanticism began to develop the notion of wandering, on the other hand, as a positive opposition to the concept of home. This is particularly true of German Romantic literature which increasingly perceived ‘bourgeois homeliness’ as being too restrictive. In a broader— and geographically wider — sense, home was also the place where industrialisation took place, the industrialisation from which people wanted to escape through free wandering in nature. The figure of the flâneur, as depicted by Baudelaire, Walter Benjamin and to a lesser degree Soren Kierkegaard, in turn, stands in stark contrast to this. The flâneur is the emblem of modernity: an urban wanderer figure that no longer wishes to escape from the city but begins to dominate urban public spaces in classical narratives, holding a privileged position and making himself at home in the streets of modern European metropolises.

But wandering is not just a physical activity; there is also mind-wandering, a metaphorical form of wandering taking place in that most intimate and homely dimension of personal space — the human mind. Modernist literature’s stream of consciousness writing functions as the means of exploring these wanderings of the mind that, by opening up multiple perspectives of literary texts, results in a wider understanding of mankind and its character.

Our conference will explore these plural facets of ‘wandering’ and ‘home’, examining their representation, cultural significance and, last but not least, the relation between the two. We therefore warmly invite contributions.

Suggested topics include, but are not limited to the following and their interrelations:
•       Wandering in European Romanticism and Modernism.
•       Wandering women in European literature and film.
•       The figure of the flâneur and the flâneuse in modern and contemporary literature.
•       The connection between migration and ‘feeling at home’; the concept of home viewed from the perspective of a displayed person.
•       Home as a social or private spatial dimension, a psychological experience of safety, stability and emotional experience, a practice and/or an active state of being in the world.
•       ‘Feeling at home’, or ‘not at home’ as a distinctive emotional experience influenced by the social, political and economic context and by the architectural configuration of domestic environment.
•       Feeling at home in our mind; mind-wandering; the boundaries between wandering creatively and getting lost in speculations.
•       The internet and virtual wandering as a means of transforming the way we inhabit the non-virtual realm of the home.

The conference is open to all disciplines within the Humanities as well as Psychology and Cognitive Sciences, Sociology, Politics, Architecture and Visual Arts. Papers coming from an inter-, trans- or multidisciplinary background are particularly welcomed.

Papers should last for 20 minutes and will be followed by a 10-minute discussion.

Abstracts of approx. 300 words should be sent as Word documents to the conference organising committee at skepsi@kent.ac.uk by 31 March 2018. The e-mail should also include the name of the author, institutional affiliation and brief autobiographical details. Please also indicate any audio-visual requirements that you may have.

The second CounterText conference will be held at the University of Malta, between the 6th and the 8th April 2018. The theme of the conference is ‘The Post-Literary’.

The theme reflects CounterText’s subtitle, A Journal for the Study of the Post-Literary. It is also an opportunity to explore, refine and critique the rationale proposed by the journal in its very first Editorial: http://www.euppublishing.com/doi/abs/10.3366/count.2015.0002

Abstracts for papers responding to these perspectives on the post-literary are welcome. The organisers are particularly interested in papers analysing works (literary, post-literary and otherwise) seen as symptomatic of, or countering, this rationale.

CounterText conferences are aimed at providing intense and focused discussion around one theme. The first two days will allow for longer papers of 40 minutes presented in single-track form for plenary debate. The third and final day will have two tracks running in parallel, aimed at accommodating 20 minute papers. Submission to the journal is however open and ongoing, and the editors welcome articles proposed to the journal that address the themes above.

Abstracts of 300 words (with an accompanying biographical note) may be sent to the organisers at countertext@um.edu.mt by 1 March 2018.

CounterText’s editorial team is based at the Department of English in the University of Malta’s Faculty of Arts. Since its launch the journal has published interviews with writers and critics like Judith Butler, Tom McCarthy, Simon Critchley, Stephanie Strickland, Timothy Clark, Marie-Laure Ryan, Patrick McGuinness, J. Hillis Miller, Marjorie Perloff, Charles Bernstein, and Ranjan Ghosh, as well as articles by established and emerging scholars working on ideas relating to countertextuality and the post-literary. CounterText also publishes creative work responsive to its concerns.

More information about CounterText can be found here: http://www.euppublishing.com/loi/count

4. The Practice of a University: A New Critical University Studies Collective

I'm a 1st year DPhil student in French, looking to build up a critical university studies<http://www.crassh.cam.ac.uk/blog/post/on-critical-university-studies> collective in Oxford. I'm currently seeking co-conspirators to come and read, talk, and think with me, in a non-hierarchical and positive setting about what universities are for, how they should serve the public good – and how we can adapt our practice to help effect positive change. The agenda will be set as a group, based on members' interests, and any readings will be concise enough to read while the kettle boils. The collective is open to all, from undergraduates to senior academics, and those in administrative roles. 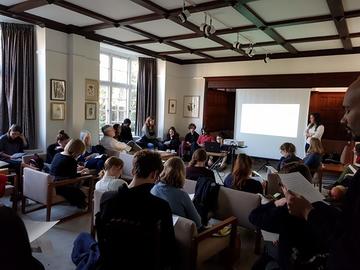