The colloquium, Literature, Democracy and Transitional Justice is coordinated by Professor Mohamed-Salah Omri, Tutorial Fellow for Oriental Studies at St John’s. It will take place on 18, 19 and 20 March 2018, bringing together participants from over a dozen countries who will address specific situations of transitional justice across the globe. The event seeks to open dialogue between scholars working on authoritarian systems and democratic transitions in the fields of literary studies, history, philosophy and law. In addition, papers will focus on case studies, including Spain, Portugal, Argentina, Columbia, Tunisia, South Africa, Rwanda, Taiwan, Algeria and former Yugoslavia. The colloquium will also feature the Syrian writer Zakaria Tamer.

Sadly, Close-reading a Global Novel across Languages: Prismatic Jane Eyre planned to take place on Friday 2 March was cancelled. We hope to reschedule the event for Trinity term. Many thanks to everybody who came to the Discussion Group on Monday - we hope you enjoyed it as much as we did!

Balzac never visited England; yet England was close to his heart. Taking this apparently paradoxical subject, this conference explores the nature of Balzac’s engagement with Britain, but also of Britain’s and the Anglophone world’s engagement with Balzac.  Gathering many of the world’s most prominent specialists, topics covered include cross-channel interactions, literary and linguistic appropriations, studies of manners, politics, myths, languages, satire, and creative and critical reflections from Balzac’s day to the present. In asking of this greatest and most perceptive of novelists what Angleterre and ‘England’ could mean, the conference raises fundamental questions about identity, literary conception and nationality that led the nineteenth century, and may yet shape our own.

The conference will take place at the Maison Française d’Oxford, the CNRS Oxford Research Hub, with wine receptions in the Taylor Institution, home of one of the world’s leading libraries for European Languages and Literatures, and Pembroke College, where the conference Gala Dinner will be held.

2.Call for papers
Phantoms of the opera: Music and performance on screen

This conference will be the culminating event in a three-year research networking project funded by the Leverhulme Trust in the UK. Our aim has been to trace the routes and mechanisms by which the novel Le Fantôme de l’Opéra (Gaston Leroux, 1909-10) evolved from a collection of clichés about a particular institution at a particular time in the late nineteenth century into a global cultural phenomenon—and, especially, a number of substantial but discrete and geographically distant screen traditions in the twentieth. For more background, see thephantomonfilm.com.

This call for papers seeks to bring into dialogue international and interdisciplinary perspectives on the mediation of various kinds of musical-theatrical performance through criticism, fiction, adaptation, cinema, television and the internet, and on the various kinds of cultural transfer involved.

Proposals for 20-minute papers on any aspect of the subject, and from any disciplinary perspective, are welcome, as well as proposals for other kinds of presentation (conference panel, masterclass, practice as research, etc.). In the list below, ‘music theatre’ should be understood to include genres ranging from opera to cabaret and beyond. We are particularly interested in discussing:

- music theatre in Latin American screen cultures, especially mid-twentieth-century cinema and telenovela;
- music theatre (and works for the screen featuring music theatre) as a point of contact between Far-Eastern and Western musical cultures, especially in colonial and post-colonial readings;
- music theatre on screen as a way of understanding the assimilation and inflection of cultural heritage in Western and Central Europe (institutions, repertories, etc.);
- the use of music in crossovers between screen genres (comedy, horror, romance, etc.) and spin-offs;
- changing attitudes to music theatre as reflected in successive remakes for the screen;
- memes and tropes in repeated adaptations for the screen;
- audience reception of musical-theatrical performance represented in different media; also fan work as evidence of that reception;
- internet echoes of The Phantom of the Opera, especially those related to the enormous success of the 1986 musical (fandom, multi-platform crossover, mash-ups, etc.).

The conference will run alongside a programme of screenings and talks on the subject at the Barbican Cinema. Details will be published shortly, but screenings are likely to include

It is anticipated that some of the papers presented at the conference will be published in the form of a collection of essays, and discussions with various academic publishers have already taken place. Please indicate whether your contribution has already been, or is likely to be, published elsewhere. The language of the conference will be English.

Please enter an abstract (250-300 words) and a brief professional biog (50-100 words) including institutional affiliation and publications, if any, into our Google form on https://goo.gl/forms/xoCYOpaVafNttvzH2 by 2 April 2018 at the latest. Any queries should be addressed to the Network Facilitator, Almudena Castro, at almudena.castro@gsmd.ac.uk.

Overview
Organized by the Centre for Modern European Literature at the University of Kent, this summer school offers intensive training in the underlying principles, the variant practices, and the latest perspectives of comparative literature. The theoretical assumptions and practical implications of the discipline are so diverse that a residential programme focusing on its common causes is long overdue in the UK. Designed to include both European and non-European perspectives on comparison, this summer school will bring together postgraduate students working in the many fields of comparative literature, introducing them to leading specialists in the discipline and offering them a valuable opportunity for both intellectual training and institutional networking.

Programme
The programme will be delivered through a mixture of seminars and lectures spread across three days. On the morning of the first day, students will be asked to give brief introductions to their current projects; on the afternoon of the third day, they will give full presentations on them, including reflections on how these projects can be enriched by lessons learned over the three days. In between, they will participate in seminars on the history, hermeneutics, and practicalities of comparative literature. These seminars will be supplemented by keynote lectures given by figures of international standing within the field, conceived as case studies in the theory and practice of comparative literature.

Student profile
Applications are invited from postgraduate students – either currently undertaking a PhD or about to start a PhD – working in the field of comparative literature broadly defined. The school is fully funded by CHASE (Consortium for the Humanities in South-East England); accommodation costs and tuition fees of successful applicants will be covered. Students will stay on campus for the duration of the school (3 nights), and will be expected to participate fully in all aspects of the programme.

Application process
Suitably qualified students should submit a letter of motivation, a brief CV, and a one-page outline of their project to: chasecomplit@kent.ac.uk

Deadline for submissions is 15 April; admission decisions will be communicated by early May. Around 12 students will be admitted; CHASE members may be given priority. Informal enquiries should be directed to: S.M.Obermeier-32@kent.ac.uk

4. #OWRI FUNDING OPPORTUNITY: We are inviting applications for projects related to 4 areas of Creative #Multilingualism. We particularly welcome applications from #ECRs. See our website for more details: http://bit.ly/2t9ArVh 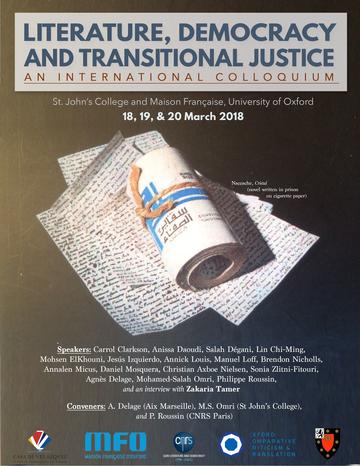