In our second discussion group session, on February the 4th, we will focus on contemporary Arabic poetry produced by Palestinian, Iraqi, and Syrian refugees. Yousif M. Qasmiyeh (co-convener of the discussion group) will facilitate this session and draw on work completed by the AHRC-ESRC funded Refugee Hosts project in Lebanon (Baddawi Camp and Hamra) and Jordan (Jerash and Al-Zarqa).

On Wednesday of Week 3, the Fiction and Other Minds seminar explored the theme “Re-Conceiving Personhood: Cognitive Readings of Mystical Texts” with Gavin Flood and Ufuk Özturk, both of Oxford.

This conference aims to bring together scholars working in the fields of urban studies and cultural studies (broadly conceived) to explore how cultural factors, practices and productions influence or are affected by the changing relationship between city and nation. It seeks to extend the scholarship on city, nation and culture beyond cities traditionally aligned with the nation-state by encouraging papers on cites often excluded from discourses relating to national culture. It further asks how cultural practices and production shape understandings of the relationship between city and nation; how national identities and discourses play out in the context of distinct urban contexts – how they are negotiated, refracted, challenged or made concrete in the microcosm of the city, its cultural practices and its cultural representation; how practices of identity-building and the branding of cities relate to wider national identities and cultural imaginaries; and what the changing relationship between city and nation reveals about the nation-state, its workings and its discourses. Theoretical tools for understanding emerging relations between city and nation and new methodologies for the study of the same are particularly welcome. These will be complemented by case studies dedicated to distinct city-nation contexts.

Keynote speakers will include Professor Karen Till, Maynooth University

Relevant topics might include:
- theoretical approaches to city-nation relations
- methodological concerns and innovations
- city and nation at the nexus of cultural and urban studies
- case studies of distinct urban contexts and cultural practices
- urban cultures and practices of resistance
- cultural representations of changing city-nation relations
- historical considerations relevant to the contemporary context
- distinctive urban cultures and their relationship with nation-state discourses
- cultural practices and products addressing issues of local, national and transnational significance
- world cities at the nexus of national and transnational culture

Abstracts for 20-minute presentations should be c. 250-300 words in length and accompanied by a brief biographical note. The deadline for submissions is 1 April 2019. Accepted papers will be confirmed by 30 April 2019. Please send to r.s.glynn@bris.ac.u

2. Deadline Approaching for Submission of Article Proposals for

One of the latest fitness trends from Sweden is the so-called ‘plogging’, picking up trash while jogging. Embarking from this image of social engagement for the purpose of healing the planet proposals are sought for an upcoming issue of Studies in Twentieth and Twenty-First Century Literature for a series of essays in English that analyse literary, filmic, or other artistic productions in twentieth- and twenty-first century German, French, Italian, or Spanish speaking cultures in view of the links between ‘slow travel’ and eco-awareness.

Slow travel implies an intensification of experiencing the environment, its devastation, and possibilities of healing. This is not limited to walking alone, although authors of literary walks such as W.G. Sebald or Friedrich Christian Delius are important for this volume. Such literature reveals the tension between the solitary walker distancing himself from the community with its social and political responsibilities, while at the same time actually engaging more closely with the global community and its concerns about the environment and politics. But walking in literature can also be an intensely neo-Romantic experience. When Percy Bysshe Shelley and Mary Wollstonecraft (later Mary Shelley) first eloped and found themselves stranded without money in Paris they decided to walk the 700 km distance to Switzerland. While nineteenth-century literature teems with walkers, how does this map out in the twentieth and twenty-first century?

Apart from this focus on literary walks we seek submissions on various other texts linking ecological awareness to unusual forms of travel. Proposed essays may include but are not limited to topics such as:

* slow travel and encounters with animals;

* walking and health in literature;

* debunking myths about other species;

* diversity of forms of slow travel in literature and film;

* intense encounters with the natural world;

* walking and eco-awareness in film and the visual arts;

* metaphors of slow travel in the context of ecocriticism;

* walking in the city versus nature;

* the potential of slow travel for healing oneself, others, and the planet at large (as in Werner Herzog’s winter walk from Munich to Paris)

This volume argues that with the slowing down of physical mobility and the traveler’s self-marginalization and constant crossing of boundaries, walking and other forms of slow travel increase political alertness, reflection, and a tendency to protest. We are interested in submissions also that examine contemporary literature in light of the philosophical and literary roots of such travel (such as Jean Jacques Rousseau or Robert Louis Stevenson), and which engage densely with theories of slowness, wandering as resistance, and self-exiling during travel (e.g., Michel de Certeau’s The Practice of Everyday Life, Frédéric Gros’ Philosophy of Walking, Ernst Jünger’s Der Waldgang, Rebecca Solnit’s Wanderlust). The volume is open to a diversity of theorizations. What function does slow travel, especially walking, have for the social responsibility of travelers who follow what Deleuze and Guattari have called a rhizomatic trail across borderless smooth space? Rebecca Solnit has argued, for example, that slow travel “ideally is a state in which the mind, the body, and the world are aligned” (Wanderlust 2000).

As Guest Editor I am particularly interested in submissions which examine how literature and film represent slow travel -- with its cosmopolitan, polyphonic messages, and the temporary exile of lonely and visionary individuals walking away from their communities and trespassing across communal, territorial, and national boundaries – and whether slow travel may, in the end, be more conducive to the healing of the planet than an insistence on social and political responsibility that is firmly attached to hermetically sealed-off civic, national, and thus ultimately imagined communities.

Studies in Twentieth and Twenty-First Century Literature is committed to publishing high quality, anonymously peer-reviewed articles written in English on post-1900 literature, film, and media in French, German, and Spanish. The journal is devoted to theory and criticism in the modern languages and encourages interdisciplinary and collaborative submissions. Many acclaimed literary critics and theoreticians have appeared in STTCL and served as guest editors of STTCL special issues dedicated to one language or theme. Likewise, the editorial advisory council includes esteemed authors, critics, and theoreticians in French, German, Spanish, and Comparative Literature. From 1976 to 2003, the journal was known as Studies in 20th Century Literature, and through 2013, it appeared in print form twice a year (winter and summer) and it is currently published in an online, Open Access format which enhances the journal’s sustainability and broadens its global readership.

Please provide a 500-word abstract for articles not to exceed 7500 words, along with a brief CV, complete contact details, and academic affiliation, in an email to arndsp@tcd.ie with the reference line of STTCL Abstract. The deadline for the submission of abstracts is February 8, 2019. If chosen for publication, the completed article will need to be submitted no later than July 1, 2019.

3. 2019 George Steiner Lecture in Comparative Literature at QM on 7 March. The speaker this year is Professor Rebecca L. Walkowitz, author of Born Translated: The Contemporary Novel in the Age of World Literature (2015). I was hoping you could circulate the Eventbrite page. Please, find below the registration link (attendance is free),

Geo-political Conflict in Emergent Genres and Forms: Israel, Palestine, and the Middle East after the Second Intifada

Rebecca L. Stein and Ted Swedenburg have argued that the Second Palestinian Intifada has changed the ways in which Israel and Palestine have been represented and circulated in popular culture from the region but also internationally (2005: 13-14). Indeed, Palestine and Israel are not only the subject of work produced in the Middle East but also increasingly feature in cultural products from outside the region. For example, there has been a surge in graphic novels depicting the Israeli-Palestinian conflict but also a rise in children’s literature and young adult fiction as well as memoirs, documentaries, and feature films.

We are proposing an edited collection that examines the types of genres and forms that have emerged after the Second Intifada to depict and engage with Israel, Palestine, but also the Middle East more widely. We are interested in how aesthetic and formal strategies are used to represent this geopolitical context to regional and international audiences, especially after the Second Palestinian Intifada in the early 2000s. As such, this collection addresses how genre and form work to illuminate and redescribe conflict in the context of Israel and Palestine but also how depicting conflict impacts aesthetic and formal strategies of representation more widely.

Contributions are welcome that detail how cultural texts might use and challenge narrative and formal conventions in order to offer alternatives to mainstream historical, political, and cultural discourses.

Essays might focus on, but are not limited to, the following questions:
•       How do authors and artists represent Israel, Palestine, and the Middle East?
•       How do they make this geopolitical region accessible to their audiences?
•       To what extent do they experiment with form and genre or use metafictional devices?
•       Do these texts offer an alternative to mainstream discourses and established contextual frameworks, and if so, how do they do this on a narrative and/or formal level?
•       How does inscribing conflict manifest itself on an aesthetic and formal level?

Abstracts (500 words) are due by Friday, 31st of May 2019 and should be sent with a short academic bio (50-100 words) to the editors, Dr Ned Curthoys (ned.curthoys@uwa.edu.au) and Dr Isabelle Hesse (isabelle.hesse@sydney.edu.au). Authors will be notified in late August 2019 whether their abstract has been accepted and will be invited to submit full essays by 31st January 2020. 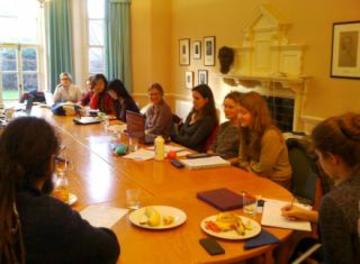