If you think Covid-19 is a dress rehearsal, you may be at the wrong play

Climate Crisis Thinking in the Humanities and Social Sciences.

From the waterways of Venice to the troposphere of New Delhi, environmentalists everywhere are looking at the world with new clarity, and what do they see? The climate future. Unable to resist excavating similarities between the current global crisis and the next, articles variously dub the Covid-19 pandemic a ‘dress rehearsal’ for climate change, or call for new sustainable economies to be conjured from the turmoil. For many, the political and fiscal largesse bestowed on this crisis, and the mobilisation of every social function to address it, has been the model of effective climate action. If,  to flog the overused wartime analogy, this response to the pandemic can be described as ‘total’, the climate sector too has been enlisted.

But how useful is it to compare climate change and Covid-19? Despite the obvious attractions, is it really credible to think of the pandemic as a ‘gateway’ crisis, that will transform our perspective on climate change? Whether a crisis is met with radical action depends on its ability to inspire an appetite for that change. Ultimately, to gauge how these societal risks are perceived in the Global North and West (where the capacity and responsibility to mitigate the effects of climate change largely reside) we must understand how those risks behave as phenomena. As the climate sector retunes its auguring activities towards futures and opportunities in a post-coronavirus world, it must keep in its sights the ways these crises communicate, the geopolitical landscapes upon which they fall, and the values they engage.

Firstly, Covid-19 and climate change have entered the public consciousness in very different ways. Climate change communicators have long despaired at the widespread tendency to understand the crisis as a distant concern. Geographically, climate vulnerability seems forever located in some far off region called the ‘third world’. Temporally, the constant talk of deadlines, tipping points and policy targets, and the time lag from emissions to impacts all fatally affix climate change as a problem for the future. Not so with Covid, which collapsed space and time, and overnight turned the world just beyond our windows into a hostile and dangerous place.

Where crises are situated has profound consequences for our motivation to address them, but so does where they originate. Shutting down society to defend the status quo against a threat that is seemingly exogenous - be it terrorism, an invading army or a virus - is a considerably easier sell than doing so voluntarily because we are causing the crisis. The first is self-defence, the second is self-sacrifice; one calls for patriotic solidarity, the other for guilt-induced abandonment of our material comforts.

And what about the perennial dilemma of communicating uncertainty? Despite decades of research and a vast body of knowledge, climate scientists have historically struggled to translate the language of probability into decisive journalistic statements. There is, after all, nothing you can swab a hurricane with to tell if it is climate change, yes or no. Covid-19, on the other hand, is the garden from which a thousand infographics bloom. Maps and stats attempt to quantify our invisible enemy, and like throwing sand into the wind, allow us at least to see the threat, even if we can’t understand it. How can climate change, with its language of ‘increased causal probabilities’ compete with the tangibility of a daily death count, which we keep score of with grim fascination? For all the caution advised by modellers in quantifying the unfolding health crisis, and indeed the relative paucity of scientific certainty surrounding it, to the public a pandemic seems to wish to be understood, in a way that climate change never has.

Second, the coronavirus has not, so far, respected the quietly colonial geopolitics that both defines climate change and stymies efforts to address it. The nations whose historic industrialisation destabilised the global climate bestowed on themselves an economic hegemony that will largely shield them from the worst early impacts. As a result, acute vulnerability and mitigation capacity are qualities that rarely cohabit in the imaginary of the global climate regime; this question of ‘equity' becoming perhaps the defining barrier to progress. In the case of the pandemic however, developed countries have been among the first and hardest hit. It is early days of course: the ‘great leveller’ has become the popular but facile moniker for a virus that will likely prove a vulnerability-multiplier for countless communities already living in precarious circumstances worldwide. Nevertheless, for the globalised networks that give oxygen to the developed world abruptly to become the very channels of their undoing is an unprecedented turn indeed. It has undoubtedly lent trembling urgency to Euro-America’s comprehensive response to Covid. Whether it will do the same for the climate crisis depends on transferrable this jarring new experience of first-world vulnerability is.

In a recent blogpost, Bruno Latour speculated that the coinciding period of Lent offered self-isolating Christians an opportune setting to contemplate ‘what is important and what is derisory’ in society. It will be necessary, he suggests, for tackling the graver climate crisis to come. Celebrating Passover with friends via Zoom, I was struck by a rather different religious parallel. The night the angel of death spent thinning out the families of Egypt was, for the newly liberated Hebrews, one to celebrate. To ancient gentiles, however, it must have seemed a cruel, bewildering and random logic. Like the biblical Egyptians, this is the first time many in the Global North have had to confront the notion of vulnerability, and the fact that wealth and society might not be there to catch them. Existential fear is a formidable motivator, so the widespread compliance - even approval - that the strictures of lockdown have been met with should be no surprise. The ways risks reveal themselves determine how society responds to them, after all. Is it realistic to expect equivalent responses to climate change then, given the ongoing abstractness of its threats in the very societies charged with mitigating it? Back in ancient Egypt, it was a succession of grizzly plagues, not the promise of them, that prompted mitigative action from a traumatised Pharaoh. As long as the geopolitics of climate change separates vulnerability from mitigation capacity, the urgent advice of Latour and others will have a hard time being heard.

Finally, the demographic landscape living under Covid-19 describes a near reversal of the topography of victimhood to what we have come to expect of climate change. Sea level rise, extreme weather, resource scarcity and mass forced migration are the burden of the young and unborn, unfurnished with the political agency (or in the latter case, legal personhood) to defend their future interests. In this pandemic, it is the children who enjoy the privilege of relative invulnerability, and their grandparents who must fear for a future altogether more imminent and tangible. The suggestion that the speed and scale of the political establishment’s response to the crisis has something to do with quite how many of its constituents populate the ‘most vulnerable’ demographic may be a touch conspiratorial for some. Even so, age and - more broadly - time have a strong figurative presence in what action to mitigate our two crises represents, politically and ideologically.

An appetite for change – or a return to the status quo?

Progressivism has long been a battle waged between an ever nascent youth and the old order.  Despite the wealth of narratives with the potential to align climate change to more conservative values like religious custodianship and community solidarity, it has largely been subsumed within a progressive agenda. As reflected in current discussions about policy futures post-pandemic, climate action thus means choosing change over continuity, future over past. Covid-19 produces political choices that similarly wed ideology to time: end lockdown a month earlier and jeopardise the lives of x number more elderly citizens, end it a month later and saddle the next generation with y more years of national debt. Economic recovery will present a choice between the short term benefits of reviving old and carbon-intensive models, and the more future-oriented but immediately disruptive work of devising new and sustainable ones. Responding to this crisis forces complex political choices: between health impacts on the old, or economic impacts on the young; and between timescales of recovery with disparate definitions of ‘economic sustainability’. It is anyone’s guess whether the churning present will spur a period of radical introspection, but in the UK at least, the ‘opportunities’ for change that currently crowd leftwing media have been available for many years. What successive elections have shown is a negligible appetite for such change. If the politics of older voters have brought in the current government, it is the old whose interests - as well as their vulnerabilities - could define this moment of crisis, both during and after the virus. Time is political, and the same ideological tides that marooned climate change on a future horizon might position this crisis in a more visible line of sight for our political leaders. It just depends who those leaders are, and what they care about.

Responses to crises are generated through the interpretative lens of prevailing values, and given social consent according to how these crises present themselves to society. That Covid-19 arrived with such explosive visibility has lent it considerable gravity; the uncomfortable challenge it has presented global geographies of power has brought it swiftly to the front of the queue; and the fact that this crisis threatens the oldest in society turns the rhetoric of intergenerational politics on its head, complicating further the question of who owns the future. Those who, dazzled by the state’s newfound muscularity and the British public’s tolerance for suspensions of democracy, dare to dream of a ‘total war’ on climate change should ask first what realities these changes serve. In many cases, the UK included, the governments whose authoritarian measures we support in this context are those that we chose democratically, over administrations with vastly more ambitious climate pledges. The appetite for reform does not come from nowhere, it depends on the shape of the crisis at hand, and the values of those waiting to receive it.

Karl is currently undertaking his DPhil at Oxford Anthropology's Institute for Science innovation and society (InSIS). His doctoral research explores the social visibility of climate change in the U.S southeast, encompassing questions of public perception and climate policy. He is the head editor of Anthroposphere magazine and previously worked for Oxford-based communication organisation, Climate Outreach. 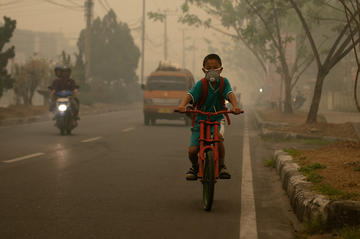