Pupils at a local primary school have published stories in which they imagine themselves to be refugees in flight from Syria, Afghanistan, Iraq and elsewhere. The children, aged between 8 and 11 years old, are in Years 4 - 6 at St Aloysius’ Roman Catholic Primary School in Oxford. They attend a weekly Writing Club which I lead, and they have just published their sixth issue of their creative writing magazine, Write Away.

The theme of this year’s magazine is ‘Journeys’, and sixteen pupils have written pieces – two nonfiction but the others fiction – centred on the shocking journeys to Europe undertaken by refugees in recent years. Ana Portocarrero Portugal, for example, who is 9 years old, wrote a story from the point of view of a girl called Monica who fled Syria after her school had been bombed, and who now attends school in the UK. She says, ‘It was quite difficult to write but it made me realise how lucky I am when people are suffering’.

Tom Ertl, aged 11, imagined the experiences of a boy called Zaynab who was attacked and injured during his attempt to leave Eritrea. Tom said of the project, ‘It helped me understand the terrible things that refugees have gone through’. Nicolo Ascari, also aged 11, wrote a non-fiction piece about the work of Naji Jerf from Raqqa, who was killed by ISIS sicariis in September 2015. ‘How small we are in the presence of the world around us’, Nicolo said with reference to his work.

The magazine, which is forty pages long, is designed pro bono each year by Kate Kunac Tabinor who is a senior designer at OUP. It is printed at Carbon Colour in Abingdon, and parents of the club members cover the publication costs.

Comments by other pupils who published pieces in the magazine include: ‘The project made me more aware of the condition of other people in the world’; ‘I like the description in my piece’; ‘I have gained intelligence from the descriptions in my writing’ (Rebecca Harpin, aged 9), and ‘I like mine because it has a happy ending’. 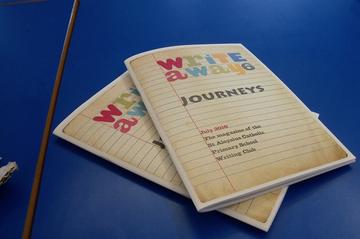