A Curatorial Research Micro-Internship with the National Trust Partnership

My project brief for the week centred on Charles Richard Dyke Acland (1793-1828), the third son of Sir Thomas Dyke Acland and a captain in the Royal Navy in the early nineteenth century. This project was linked to the National Trust property of Killerton which was owned by the Acland family until 1944. The research had been inspired by the recent discovery of Charles’ log books which had proved to be far more than lists of locations and dates – instead, they were similar to diary entries in which Charles recorded his thoughts and experiences as captain of the HMS Helicon between 1825 and 1828. Significantly, these notes included detailed accounts of Charles’ encounters and interactions with traders of enslaved people along the East African coastline.

As intriguing as this project sounded, it was also quite daunting at the beginning of the week. As a student of Classical Archaeology and Ancient History, the closest I had come to this time period since my A Levels was in a module focusing on the Roman empire in the second to fourth centuries C.E.! Consequently, my first task of the week was to try and gain a degree of perspective on this period; a thesis recommended by the National Trust was helpful with regard to the Royal Navy while I also used articles by Rothery and French to look into the experiences of the gentry at this time. These latter articles were particularly useful in contextualising the background of Charles Dyke Acland.

Research into the HMS Helicon was an interesting element of this project as there are records of a number of ships bearing this name and it was unclear as to which vessel Charles had captained. The breakthrough came with the discovery of plans in the National Maritime Museum of a new class of ship which was commissioned in the early nineteenth century and on which was listed the HMS Helicon, launched in 1808. O’Byrne’s 'Naval Biographical Dictionary' (1849) helped me to identify officers connected to the HMS Helicon and create a list of sailors who had served under Capt. Acland. I really enjoyed this part of the research as it allowed me to look more closely at names belonging to less privileged people as well as to widen the focus to consider the experiences of others in the Navy. One of my favourite finds during the week was a letter from the Assistant Surgeon to Rear Admiral Hood Hanway Christian, dated to between 1826 and 1827, in which the sailor complained about the condition of his hammock on the Helicon – this anecdote helped to shed light on life for those less powerful on Royal Navy ships.

The focus in the latter part of my week was the important topic of the suppression of the East African and West Indian Ocean trade of enslaved people undertaken by the Royal Navy in the nineteenth century – principally, Charles’ connections to, and involvement with, these patrols. Two sets of notes in the National Archives were especially helpful as they listed the places visited by Charles between 1825 and 1828; these mentioned Zanzibar and Mauritius which were important centres on these routes associated with the trade of enslaved people. Although these notes haven’t been fully digitised so I couldn’t access them online, they not only add detail to the log books now held at Killerton but also link Charles to specific places which might offer further evidence that could be useful for future research.

Overall, I found undertaking my research into the Acland family really rewarding although I feel that I was only able to ‘scratch the surface’ of what proved to be a fascinating topic with multiple avenues for future investigation. My meetings with the National Trust staff were always helpful, the internship supervisors (Alice Purkiss and Dr. Hanna Smyth) were always on hand to offer guidance and support, and I really appreciated the opportunities to learn more about the National Trust, curatorship and the heritage sector more generally. Having just finished my degree, I am beginning to explore more fully my careers options; following this internship, heritage roles are definitely an area I would love to learn more about and pursue further. 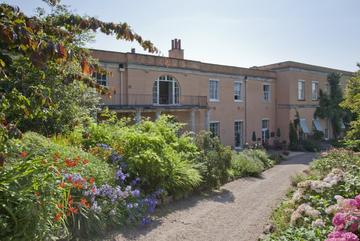