Lacrimae Rerum: building a bridge between literary and monumental commemoration

In Book 1 of the Aeneid, Virgil’s epic hero finds himself washed up on the shores of an alien land. Defeated in Troy and battered by Mediterranean storms and whirlpools, he is far from his destroyed home and leading a small band of surviving crew. Amidst the survival imperatives of finding food and shelter there seems little time for quiet reflection. The Aeneid is, after all, the story of the birth of Rome from the ashes of Troy, and it is the conception of this destiny which drives both Aeneas and the work. However, before he allows Aeneas to get on with building the future, Virgil grants him a brief moment to reconcile himself with his struggles of the past: in an unusual moment of contemplative seclusion while scavenging for supplies, Aeneas comes across a Temple to Juno. On the temple walls are etched murals depicting scenes from the Trojan War, images of his friends and countrymen, many dead. When discovered by a comrade as he is crying before these architectural stone inscriptions, Aeneas famously explains: ‘sunt lacrimae rerum’. The genitive form of ‘rerum’ allows for two seemingly divergent interpretations: ‘there are tears for things’, and ‘there are tears of things’. It is as if not only does the human cry out because of the emotive power of material objects, but also that through that very emotive power the material world itself is crying out for the suffering of man and the world. It is the experiential reconciliation of this heuristic dichotomy which enables Aeneas to move on: he finds harmony, acknowledgement, and affirmation in the echo of his own tears in the tears of the material world around him. Reconciled with the world, he can dust himself down and get on with the job of laying new foundations.

It is interesting to contrast the rootedness of Aeneas’ journey with the peripatetic trauma of his literary predecessor. Odysseus begins his epic story crying on the beaches of Calypso’s island, and ends it crying on the beaches of his native Ithaca. Even though Odysseus, unlike Aeneas, won his war and successfully journeys to a geographical location he understands as ‘home’, he never recognises, nor is recognised in, any of the places through which he moves. Again, unlike Aeneas he never finds, even for a tear-drop moment in a foreign temple, a harmony between his own feelings and those of his material surroundings. Whereas Aeneas ends his epic in his new homeland, Odysseus ends his epic boarding another ship.

For reconciliation and the potential for rebuilding, some form of material acknowledgement and affirmation of powerful feelings of loss and confusion is necessary. Winning, losing, being a refugee or being a returned veteran seems of less consequence in an individual’s ability to reconcile and rebuild than does a feeling of emotional harmony between oneself and one’s surroundings.

Trauma is a confusing and deeply personal matrix of emotions, and it can thus be very isolating: the disjuncture and rupture in ways of thinking and living between Aeneas and Dido, Odysseus and Penelope are one of the great tragedies of the two works. But if individuals are to be part of their community, and able to take part in that community’s team-driven process of rebuilding, it appears that they have a need to feel understood, valued, affirmed and echoed by and in their surroundings. And though literature can sometimes be an individual or elite art of creation and consumption, the scale, material presence, and community agreement and collaboration necessary for its erection, have the potential to make monumental acts of commemoration a more social and thus effective mode of reconciliation and rebuilding.

This, however, presents a further challenge: though a lone poet can craft her own politically resistant work below the autocratic gaze of state or community, monumental works, because of their characteristic social presence and funding and building requirements, are arguably more vulnerable to politically convenient forms of commemoration which may not resonate with their visitors to the same extent as did Juno’s Temple with Aeneas. Anna Akhmatova in Requiem, one of literature’s most resistant and powerful commemorative works, points to this danger:

And if they ever in this, our country,

Consider erecting to me a monument,

I give my whole-hearted consent,

But with one condition—do not

Put it by the sea where I was born;

My last connection with the sea is torn.

Not in Tsar’s Garden, by the famous stump,

Where an unrequited shade searches for me,

But here, where I stood three hundred hours

And where for me the gate opened never.

Because even in blessed death, I am afraid

I will forget the Black Maria’s thundering.

And may from under immobile bronze lids

A flood of tears run as a stream of snowmelt.

The ‘here’ of Akhmatova’s desired monument is the prison gates where in 1930s Leningrad she queued with other desperate mothers for news of their arrested children. For her, it seems, a commemoration of her as a powerful Soviet poet would not be harmonious with her own traumatic experience and feelings of a mother and a wife trying to cope with civil war and political oppression. While Maecenas stood at Virgil’s shoulder ensuring that Aeneas’ poetic vision of Rome matched Augustus’ political one, and that that the sufferings of his recent civil war were overlaid with marble, Akhmatova relentlessly demands that commemoration, literary and monumental, reflect and affirm the visions and memories of all, not just the political elite.

As we begin this term’s series of events, it appears that monumental commemorations may offer powerful ways for traumatised people to feel reconciled with their society, but such monuments’ vulnerability to the political agendas of their funders and builders may also possess a power to alienate and silence. How then can monuments successfully open a space for reconciliation and not merely provocatively materialise a previously latent social divide? Should monuments approach trauma like the poetry of Akhmatova and, in the words of Dunya Mikhail, ‘shine a light on a wound’? Or should they, in the words of Augustus, ‘find it of brick and leave it of marble’? Whether it be a marble statue of Augustus, a stone statue of Rhodes, or a bronze statue of Saddam Hussein, can there be as much reconciliatory value in the destruction of monuments as in their building? If so, can reconciliation do anything more than mark out the borders of new battle lines? And how commemorative can a monument remain for those who do not take an active part in its events or its building or its destruction?

It is something of an irony that in introducing these questions and expressing the power of monumental commemoration I have resorted almost entirely to literary analysis. After two thousand years we can still feel, share, and take comfort from the grief of Aeneas for his fallen comrades, but could we feel anything comparable were we to visit the Cenotaph during rush hour tomorrow morning, let alone at the remains of the Arch of Augustus? I am excited and intrigued at how this term’s events will explore these questions and how we will try to build a model for an empathetic and monumental bridge between Juno’s Temple and Akhmatova’s Prison. 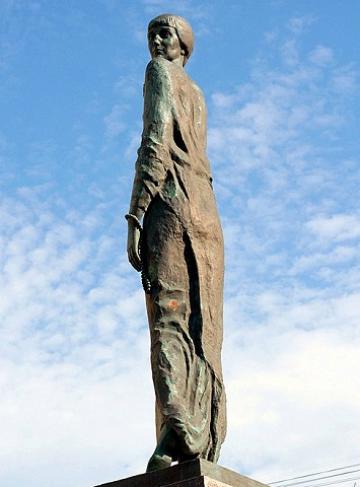