Language and the space of ethnocultural dialogue 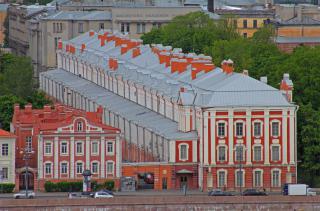 We are pleased to inform you that the interdisciplinary conference: “Language and the space of ethnocultural dialogue” within the research project “Historia nationem gignit” will be held in the Institute of History of Saint-Petersburg State University in March, 22-24, 2017.

This is the fourth conference in the series of conferences “Nations and ethnicity in Humanities and Social sciences” which are held in Saint-Petersburg State University.  The researchers of the phenomena of ethnicity, nations and nationalism have to deal with the issues of language in different capacities: firstly, language is considered to be one of the markers of identities and the way of making boundaries between groups; secondly; the “ethnic” and the “social” are discursive phenomena, and thus, they have linguistic nature. The committee also would like potential participants of the conference to focus on the issues of correlation between genesis of language and formation of ethnic communities, the issue of the language as a factor of internal and intercommunicative unity; the role of language as the medium of intercultural interaction as a result of which the transformation of identities happen. From our viewpoint, the dialogues of the specialists examining the issues  from different positions - philologists and scholars of social phenomena — will help not only to raise the level of the discussion, but also to fill some lacunas in the studies of ethnicity, nations and nationalism.

The committee would like potential participants to concentrate on the issues not only in its stadial, restricted by certain period, perspective, but also in a wider context,in the methodological sense.  Consequently, the committee of the conference offers to discuss the following questions:

1. Philological disciplines and studies of ethnicity, nation and nationalism — the possibility of a dialogue.

4.  Language and formation of modern nations

5.  The issues of acculturation: from the Middle Ages to contemporary times

7.  Language as a marker of identities and the way of constructing boundaries.

8. The issues of socialization of language

10.  Language as a means of social restriction

11.  Language in everyday practices (ethno-methodology and other approaches)

The working languages of the conference are English and Russian.

Submit your application at historianationemgignit@gmail.com

The application should include the topic of the paper, its summary (300 words) and the key words as well as the details of the applicant (academic status, occupation or place of education) and contact details.

We would like to draw your attention to the fact that committee of the conference allows only in-person participation.