Can art be taught? Certainly. The larger question is, can it be learnt? And if so, how?

From at least 1298, when Philip IV sponsored a court artist’s study-tour of Italy, French monarchs and ministers believed art was best learned by reproducing the frescoes, paintings, statuary and Roman ruins found beyond the Alps. While the origins of Philip’s respect for Italy are unclear, not so that of the Valois kings who profited aesthetically from sixty-five years of warfare on the peninsula (1494-1559) and issued invitations to Italian masters upon their return. Perhaps inspired by their work, French artists and architects made their separate ways to Florence and Rome during the sixteenth and seventeenth centuries, some with government support, others on their own. Whether they selected a mentor or allowed curiosity to lead them, their experiences were necessarily uneven, but the glories of French Renaissance and Classical art and architecture leave no doubt that they did indeed ‘learn’.

Individual artists continued to study Italian masterworks throughout the Ancien Régime, but in so far as official France was concerned, structured curricula replaced independent study – even in Rome itself. In Charles-Joseph Natoire and the Académie de France in Rome: a re-evaluation I discuss how Jean-Baptiste Colbert instituted advanced training in the papal city for a select group of young men who had been awarded Grands Prix by the Académies royales de peinture et de sculpture (1648-1793) and Architecture (1671-1793).

For some twenty years, Grands Prix painters and sculptors were further prepared for Rome through the government-sponsored programme at the Ecole royale des élèves protégés in Paris (1751-1774). Each step in the educational programme decreased students’ control over their art, for financial support brought obligation. Even if, from 1676 onward, the Académie de peinture reviewed portfolios to determine who had to compete for that year’s Grand Prix, students were still at liberty to conceptualise and develop the topics assigned. As the king’s protégés, however, they copied artwork held in the Louvre and, in general, chafed under the rules Colbert had developed for the pensionnaires of the Académie de France in Rome (1666-1793), whose goal was to form artists ‘capable of serving the king well’. Colbert interpreted this literally.

In its early years, the Académie de France functioned more like a boot camp than an art school, as students reproduced ‘everything beautiful’ in the city and Colbert dispatched cargo ships from Marseilles to collect work intended to enhance the halls and gardens of the king’s multiple properties. That need eventually diminished: in 1742, Philibert Orry, who then directed the Bâtiments du roi, served notice that no more copies of antique statuary were required. The pensionnaires were still not free to explore their own interests, however. In 1752, Bâtiments director Marigny, told Natoire that students’ ‘real business’ was to copy the work of the great masters and do this ‘without ceasing’.

Did students learn from these experiences? Certainly, all were competent and many became successful, as Bourbon France defined that success: admitted to the royal academies, exhibiting at the Salons and working for French and European courts. Looking back, though, only the autonomous Jacques-Louis David has proved as influential as certain seventeenth-century painters such as Nicolas Poussin and Charles Le Brun, whose independent study in Rome transformed the Ecole française. 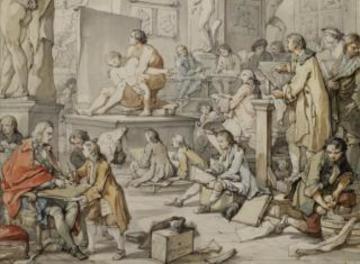