Looking Back, Looking Forward: Reflections of the Obamas in Office

Looking Back, Looking Forward: Reflections of the Obamas in Office

A robust turnout at the joint RAI and the Race & Resistance Programme seminar on Friday 4th November reflects the fact that many are seeking context to critique the promise and legacy of the Obama presidency.

Clodagh Harrington, senior lecturer in American Politics at De Montfort University, asserted Michelle Obama had both a symbolic and substantive impact. Furthering a challenge to the historic role of First Lady, begun by Hillary Clinton in the 1990s, she believed that where Secretary Clinton pushed and was resisted in return, Ms. Obama was able secure new gains.

Where Clinton failed at legislative healthcare reform in her husband’s administration, Obama was successful taking her “initiatives” into legal gains on health and education. Nevertheless, Harrington noted the racist and sexist constructions she contended with through the past eight years.

The next speaker, Daniel Matlin, senior lecturer in US History at King’s College London, was considerably less jocund about the tenure of Obama.  The rise of Black Lives Matter and the Bernie Sanders candidacy indicated to Professor Matlin that the President’s faith that the Civil Rights Movement had “taken the country 90% of the way there” on race relations was either optimistic or unperceptive.

While Obama revived the Civil Rights Department that had been eviscerated by his predecessor, at the end of his presidency, his vision for “consensual Americanism” and his role as a “great reconciler” was revealed as chimeric in light of the continuing systemic injustice, violence and racism evidenced in the current mood of American politics and society.

Continuing to highlight the significance of the Black Lives Matter movement, Lloyd Pratt, the Drue Heinz Professor of American Literature at Linacre College, believed that the Obama presidency made such a movement possible because of a change in the imaginative possibilities for black Americans. Participatory democracy could be invigorated, he suggested, by utopian imaginings of what’s possible after the election of the nation’s first black president.

The last speaker, Althea Legal-Miller, Teaching Fellow in African American history at the Institute for the Study of the Americas at University College London, questioned the optimism that a black president alone could affect any radical change, particularly because of his moderate centrist inclinations.  Most black and poor Americans find politics irrelevant, she contended, because the systems that run the country are too insidious and pernicious for any one individual or party to overcome. Only when political campaigns are deracialized and embrace transcendent issues that face all Americans is there hope for radical change and wide democratic enthusiasm and engagement.

Lynne Foote is a MSt student in U.S. History doing research on the Negro spiritual, white church patronage and the life and work of Harry T. Burleigh. 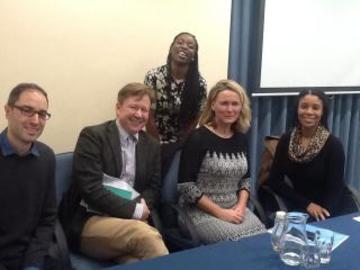