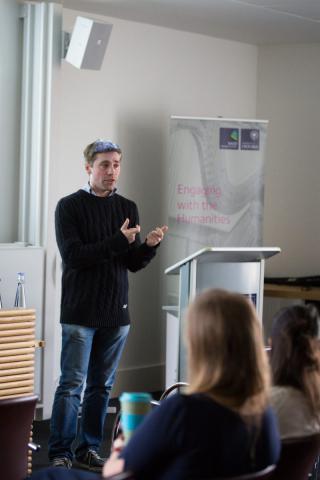 England in the late sixteenth century was a society in flux. London was growing rapidly and establishing itself as centre for international trade. As it did so, people were forced to challenge old ideas, such as the belief that charging interest or usury was ‘evil’. Religious discord perpetually simmered beneath official acknowledgement of the Church of England, and Elizabeth I held on to power by creating the Virgin Queen ‘brand’.

As always, the arts – and in this time and place, particularly the theatre – led the way in exploring what it meant to be a man or woman in this new world.

In the second talk in this year’s Engaging with the Humanities series, Dr Ben Morgan, Lecturer in Early Modern English Literature at St Catherine’s College, examined some of the ways in which Shakespeare tackled the question of what makes a meaningful life.

Dr Morgan opened his talk by looking at the type of theatre that Shakespeare’s plays were written for. The Globe (now reconstructed on London’s South Bank) both reflected the structure of the society that first received the plays and encouraged the use of dramatic techniques that we think of as distinctively Shakespearian.

The monarch or most important person in the audience sat in the centre gallery facing the stage. She or he could not only see everything on the stage but everyone else in the audience (and, of course, she could be seen by them when they were not focused on the stage). The rest of the theatre was organised along the principle of ‘you get what you pay for’. The best seats, sheltered from the rain and with a good view of the stage, were the most expensive; standing places in the open were the cheapest. These ‘groundlings’ in front of the stage were named after a small fish that gasped and gaped when lifted out of the water. So not only had they paid less, but their pleasure was thought to be of a lesser – more unsophisticated – kind.

Much of the action during the plays took place on the ‘platea’, the thrust stage that jutted forward into the audience ‒ a feature missing from the proscenium arch theatres that became popular later. This was a place of exchange between the actors and the audience, and from where the famous soliloquies would have been delivered. Shakespeare was breaking the fourth wall before it had been invented.

Considered in this light, Dr Morgan showed how Macbeth, for example, becomes more than ‘a play about really bad hospitality’. It follows the Aristotelian model by focusing on kings and nobles but is at the same time highly personal. The Macbeths’ discussion about killing Duncan is almost embarrassing in its intimacy: in persuading Macbeth to murder his guest, Lady Macbeth challenges both Macbeth’s masculinity and their marriage.

A later scene, when Macbeth is having doubts, hints at a back story.

… I have given suck, and know

How tender 'tis to love the babe that milks me.

I would, while it was smiling in my face,

Have plucked my nipple from his boneless gums

And dashed the brains out, had I so sworn as you

Have done to this.

This speech by Lady Macbeth introduces the recurring image of murdered children – a disturbing way of thinking about political violence -- and also raises an intriguing question: what happened to Lady Macbeth’s child? ‘What seems to be a story about the history of a nation may in fact be a story about displaced grief,’ suggested Dr Morgan.

A video of Sir Patrick Stewart’s performance of the ‘She should have died hereafter’ speech emphasised the difficulties of finding space for private emotion in the midst of public activity. The speech’s nihilistic tone sounds modern, and yet something is emerging from Macbeth’s despair. ‘Nothing is totally meaningless because it is such a meaning-creating speech,’ said Dr Morgan.

Discussion following the talk focused on issues such as Shakespeare’s language and how far he is regarded as a ‘modern’ writer. It also raised issues such as the concept of ‘acting’ – both in terms of giving a performance, and as simply ‘doing’; the personal emotions that might lie behind public actions; and the difficulties of finding private space to think and feel in a world characterised by frenetic activity.