In December 1976, a group of armed men stormed Bob Marley’s compound in Kingston, Jamaica, attempting to murder the musician at the peak of his fame. The story of this botched attempt – and the subsequent deaths of the culprits – is recounted in Marlon James’s recent novel A Brief History of Seven Killings. ‘It isn’t brief, and there were eight of them,’ James announced to a large audience last Wednesday night in Oxford. ‘You’ll have to read the book to the end to find out about the name.’

In an event organized by the Black Association of Rhodes Scholars, and the Oxford Postcolonial Writing and Theory Seminar, the recent Booker laureate went on to read three passages from the novel, before taking questions first from Elleke Boehmer, his respondent, and then from an engaged audience, on questions ranging from daily composition habits to the uses (and misuses) of the word ‘postcolonial’.

One subject that came up repeatedly was that of influence. James described reading Woolf’s Mrs Dalloway and Duras’s L’Amant de la Chine du Nord while he was writing the book, before turning to William Faulkner. ‘Before, I had been waiting for one voice to emerge’, he recounts. But after a colleague pressed a copy of As I Lay Dying into his hand, he began to think differently about the project at hand. ‘I realised, why does it have to be just one voice?’

Another abiding influence were American television serials and films, which provided him not just with much of the material for the American characters and scenes of the novel, but also with an alternative way of thinking about narrative technique. Thinking about point-of-view in terms of camera shots, he says, has helped him think around numerous problems. You no longer have to think solely in terms of third person or first person, he tells his students. And you have to know when simply to hold the camera and trust the scene.

Inevitably, as the first Booker Prize winner from the Caribbean region since V.S. Naipaul in 1971, the conversation turns to his position within the history of Caribbean literature. He does not want to talk about the future. ‘I prefer to think about the present,’ he says. That present is very different from Naipaul’s generation: writers who were often to some extent in dialogue with the writing of the colonial metropolis – praising it, denouncing it, or creating fantasies of it in their heads.

‘When people use the term “postcolonial” they are often talking about people writing back to the “mother country” and some of us are doing that now but many of us are not. I was a middle class kid. I grew up in the suburbs of Kingston. I was watching MTV just like everybody else.’

William Ghosh is a doctoral candidate in English at Exeter College, Oxford. 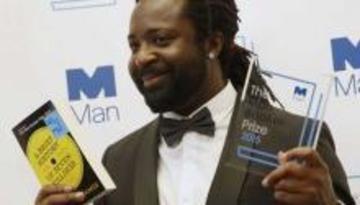