As a Hispanist I’m always aware of Spain as a ‘special case’ when it comes to European history and culture. An art historian friend of mine once told me that if she came across a piece of medieval European art that didn’t fit any of the recognizable paradigms, she immediately thought it must be Spanish. You might be tempted to approach medieval Iberian literature in a similar way. The region boasts important works in Hebrew, Arabic, Castilian, Catalan, and other local languages that were hugely influential on each other as well as texts and cultures further afield, creating a unique and often baffling textual tradition. Even the briefest foray into Iberian architecture or gastronomy shows the legacy of the hundreds of years of cohabitation of people of all three of the Abrahamic faiths, known as convivencia, before that all came to an end with the Catholic King and Queen, Ferdinand and Isabella, in the fifteenth century.

Medieval Iberia represented the cultural—and geographic—margins of Europe. Yet for those after intellectual or spiritual kicks, the region was, paradoxically, not so much the periphery as the beating heart of Europe and the medieval European experience. In the twelfth and thirteenth centuries, Iberia was, to cite the late, great Alan Deyermond, an intellectual powerhouse. In schools such as those of Toledo in northern Castile, Jewish, Muslim, and Christian scholars worked together to translate classical philosophy and literature, including the works of Aristotle, for the first time since Antiquity. Well before Aristotle brought controversy to Paris in the late thirteenth century, his work was challenging beliefs in Iberia. Progressive intellectuals flocked to the Iberian Peninsula as the centre for philosophic and scientific study at a time when northern Europe was focused on law and theology.

With the scholars came pilgrims and soldiers, however. From the ninth century, Iberia boasted its very own pilgrimage route to Santiago de Compostela in the north west of the Peninsula, a destination of equal standing with Rome, Jerusalem, and Constantinople for the pious. The Way of Saint James, Camino de Santiago, took on increased significance in relation to the Reconquest, which began to gather serious momentum in the thirteenth century. For Christians all over Europe, Iberia was a land of miracles and transformation where the holy war against the Muslims was a kind of pilgrimage in itself, and closely connected with the activity of Saint James, who was also known as matamoros, ‘the Moor-slayer’. As such Iberia was a fundamental place for the defining of medieval European identity in relation to the East and Islam; still relevant for our understanding of the Europe of today.

The earliest European history of a nation in the vernacular was Iberian. This relatively little-known Castilian document was completed under the direction of Alfonso X (1221-1284), a great patron of culture and son of the champion of the Reconquest, Ferdinand III. Alfonso envisioned the Iberian territories he held as a nation, which he called Espanna, and had designs on empire in North Africa and beyond. Known for his great respect for Arabic and Jewish scholars who, certainly in the case of the latter, fomented the use of Castilian as a language of culture as opposed to Latin, Alfonso’s focus was the promotion of Christian Castilian hegemony. It is Alfonso’s incipient nation-building in the aftermath of centuries of religious and civil warfare that, not without some irony, paved the way for the rise of the rigidly Catholic Spain of Ferdinand and

Isabella with its Inquisition, and, in the twentieth century, the reinterpretation of their legacy under the fascist dictator Franco.

Europe, now broadly secular, is still struggling to define its relationship with Islam. The recent and horrifying onslaught of the so-called Islamic State is, in some corners, fuelling anti-Muslim and anti-immigration sentiment. Hindering, rather than helping discussion is the common assertion that IS are “medieval” in their destructive and brutal approach to State-building, the most recent of which came from the Prime Minister at the Commons debate on whether or not to bomb Syria.

As writers such as Kevin McDonald and John Terry have argued, IS’s strategy is not medieval. On the contrary, it is largely the product of modern approaches to the State that seek to eradicate the cultural and religious differences and fragmented centres of power that were the general medieval norm—and are so well illustrated by the paradoxes of Spanish convivencia. To refer to IS as “medieval” is a misguided battlecry, serving above all to divert attention from the group’s ideology, which so urgently needs countering. Moreover, it should not be forgotten that medieval Islamic society was incredibly advanced intellectually and culturally when compared to Christian Europe. Europe’s progress is the result of a shared cultural and linguistic heritage that we can draw on to unite, rather than divide, us. 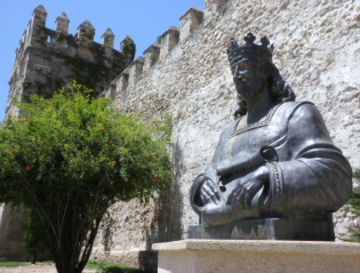