During the workshop, Karin Amatmoekrim is asked about whether a migrant writer is at the mercy of market forces in the publishing industry. The category of “migrant identity” seems to imply vague generalisations about transnational travel, exile and liminality. Ethnic identity is easily reduced to a curious bit of old history trading on the audience’s comfortable ignorance. In response, Karin describes how her publisher asked for a prologue to her second book Wanneer Wij Samen Zijn (When We Are Together), in order to introduce Suriname. As a less experienced author then, she decided to give in, but now believes that it the responsibility of the Dutch audience to find out about Suriname, as a former Dutch colony. “Screw it,” she says, “it’s their history too.”

As a Dutch-Surinamese writer, Karin has had to confront a slew of questions concerning the place she was born, even from the Dutch themselves. Unfortunately, histories of empire tend to be written and discussed within their respective colonial language-worlds, so it is unsurprising that Suriname, as a Dutch former colony, is relatively unknown in Anglophone postcolonial studies. A country on the northeastern Atlantic coast of South America, its indigenous people (known as the Surinen) were displaced by British settlers. The subsequent tussle between the Dutch and the British saw migrant labour being brought in from other imperial colonies such as Indonesia and India, as well as from southern China. Karin’s father, Eric Lie, is of Chinese descent. The Suriname republic features ethnic histories that unsettle conventional notions of postcoloniality as writing back, or as a recuperation of authentic identities prior to European colonisation. Perhaps postcolonial writing, within the larger category of migrant writing, now has to be reconsidered in terms of horizontal colony-to-colony trajectories, which will reveal how postcolonial identities re-constellate our supposed origins.

Karin sees migrant writing, and in fact all writing, as a space of pure art and of integrity—a force that allows for erased identities to be registered in the metropole.  During the workshop, participants tussled with the idea of “white innocence” in Amsterdam, where the presence of people of colour is minimal and race as a concept barely registers on social consciousness. Karin’s own doctorate research on the black intellectual, Anil Ramdas, focuses on how his writing and media work engaged the Dutch public, and the anxiety he experienced due to a deep sense of estrangement. To write creatively (or as part of research) is thus to participate in an ethical project where differences and power hierarchies are confronted, but also dismantled non-violently, through the telling of that very human thing, a good story. Karin’s latest work Tenzij de Vader (Unless the father), a biography of her own father, involves just such a difficult conversation with a man who she met only at the age of twenty-two. A popular taekwondo grandmaster and serial womaniser, he proudly boasts of his exploits to his daughter, but was upset when she wrote that he continued his life with schaamteloosheid (or “shamelessness”) despite the absence of his children.

If there is one thing that participants took away from the workshop, it is that writers do not apologise for their writing, but stand by what their craft further illuminates. Shame and shamelessness seem to be the pivot on which creative writing transforms the migrant histories we refuse to confront into objects of scrutiny and further conversation. Before the writing even begins, I venture to say, the writer herself has to account for the difficult differences that her daily life smooths over, a postcolonial praxis, if you will.

Ann Ang is a writer of poetry and fiction from Singapore, and her work has appeared in the Quarterly Literary Review Singapore (QLRS), Softblow, the California Quarterly and the Jakarta Post. She is also the author of Bang My Car (Math Paper Press, 2012), a Singlish-English collection of short stories. Ann is currently pursuing a DPhil in English at Oxford and researches postcolonial inheritance in the Anglophone world novel. She is also working on her first poetry collection. Follow her on twitter @Ann_Ang_ 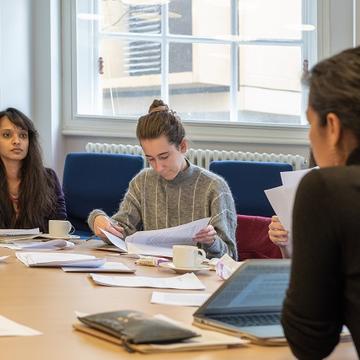