In the early days of autumn, I began my micro-internship with the National Trust Partnership, researching the presence of people of colour in the Trust’s collection. The opportunity is part of long-term efforts in the organisation to address the colonial legacies of its properties and collections, a project which has gained new and important urgency with the global Black Lives Matter protests. As an intern, I was assigned several artworks in which there was a depiction of a person of colour, most often based on derogatory and essentialising stereotypes and used as signs of white wealth and power in the work. My research quickly made me think of the portraitist scholar Marcia Pointon’s questioning of whether it is even possible for the enslaved person, who has no identity in the image, to be represented in the genre of portraiture that relies on the subjectivity of the sitters. After the internship ended, I am still grappling with such questions, wondering how we, as contemporary viewers, can re-claim their personhood. Is that a utopian fantasy?

After a summer of reading plenty of Saidiya Hartman’s work, I carefully listened to her important remark that it is tempting to fill in the gaps and to provide closure where there is none and create a witness to the lives that were not visible - but that is not a productive way forward. My research in the Trust's collections showed that there is an emptiness in the archive, as it lacks the works by the enslaved people themselves and holds no records of their lived experiences. How we can turn such absences into a presence and speak of the missing parts today? How can we handle narrative inequality and speak differently about the depicted people of colour than what the artwork perhaps “wants”?

One of the works I was assigned was the engraving George Clive and His Family with an Indian Maid by Samuel William Reynolds (after Sir Joshua Reynolds) but quickly found that it was wrongly identified in the National Trust’s collection. New research suggests (by Charlotte and Gwendolen Mitchell, amongst others) that it is a portrait of Jane Austen's uncle Tysoe Saul Hancock (doctor and merchant); his wife Philadelphia, their child Eliza, and Clarinda, their Indian enslaved maid. The research shows that it was painted in London in 1765 following the Hancocks' return to London from India, where Clarinda accompanied them. This example shows the strength of new research, which we can then use to change how the engraving is labelled. In mentioning Clarinda by her name, she is no longer defined by her status as an anonymous enslaved woman but instead recognised as an individual with a life story, a small yet powerful gesture.

Due to the on-going coronavirus pandemic, we worked remotely and online without access to physical archives. The internship confirmed the wealth of knowledge to be found on the World Wide Web, but more significantly, it showed its limitations. It is the archives of the estates that power research and allow us (after a lot of digging and frustration) to challenge established discourses of how history is written and read, finding new paths in the material of the past - a material that also presents what the histories were not found necessary to write down.

My week as an intern has further amplified the significance of recognising the Trust’s global links to colonialism, and the need to find ways to “see” and talk about artworks in a welcoming environment for everyone; a project that I am proud to have been a very small part of. 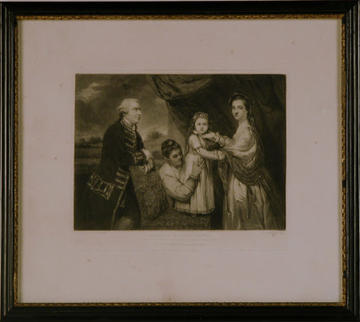