This term’s first panel workshop in the Monumental strand was led by Dr Jane Potter and explored the theme of ‘Museums and National Identity’. The five panellists, whose diverse backgrounds ranged from heritage conservation to archaeology, explored an array of vital questions such as: What materials should monuments be made from? Who holds the right to build them? Do they have a time-stamp?

Mark Johnston, Director of the Australian National Veterans Arts Museum, opened the panel with a speech about the importance of reconciliation. He explored how and with whom commemoration can be undertaken in an inclusive way, advising that all stories must be involved – from fallen soldiers to former enemies to survivors – in order to commemorate all lives lost. He also emphasised the importance of looking ahead to the future, at the soldiers fighting now and how to cater for their families, in order to honour and learn from the past.

Dr Emma Login, Manager of Historic England’s First World War Memorials Programme, addressed the topic of war memorials and what they mean for future generations. She delved into their purpose as ‘master narratives’, for serving affected families and giving future soldiers the promise of being celebrated. She touched on the heritage factor but also the authenticity of these monuments when changes are left under the charge of governments.

Dr Chrissie Steenkamp focused on South Africa’s District Six, where over 60,000 of its inhabitants were forcibly removed during 1970s apartheid. Guiding us through the District Six Museum, Chrissie shared the stories of ex-inhabitants whose memories of living in the area are now scrawled into the fabric of the walls. The living museum welcomes continual additions, immortalising fragments of former homes, art and street signs. It is a place of communal commemoration where a collaborative effort helps to keep the sense of belonging alive. Chrissie addressed the crucial question of what happens to a monument when all first-hand tenders are gone – should this museum be neglected or should the legacy live on? And most importantly, who gets to decide these things?

Dr Gabriel Moshenska, Senior Lecturer in Archaeology at UCL, took us through some fascinating examples of performative and collective commemoration in which the monumental zones become arenas for the promotion of local identity. He ended by talking about the Stairway to Heaven Memorial Trust, a crowdfunding effort which commemorates the 1943 Bethnal Green Tube Disaster, and the powerful message that arises when a community takes ownership for the direction of its memorials.

The panel closed with Pulitzer Prize-winning journalist Tony Horwitz, who led us across the Atlantic Ocean to Charlottesville where recent riots prove that white supremacy still runs rife. Sparking questions about the monuments erected to honour Confederate soldiers such as Stonewall Jackson and Robert E. Lee, he questioned the ownership of these monuments. Should we hide them away, build counter-monuments or display them in a giant museum dedicated to white supremacist history? His answer: “Lose the dudes, keep the horses”. 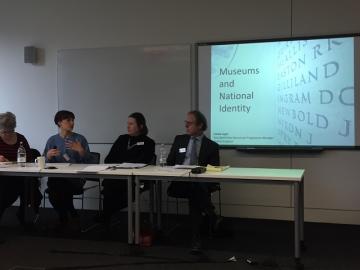