We hope to see you this coming Monday (16 October, 12.45-2pm, St Anne's, Seminar Room 3) for the OCCT Discussion Group! The sessions will be structured as an experiment in comparative reading out of context. This format seeks to pull readers out of their comfort zone by asking them to compare passages from literary texts without the usual background (biographical information, historical context, etc.) that covertly informs our reading. In doing so, we hope to shed light on our own biases as scholars, with an eye to sharpening our critical practice. No preparation necessary! As always, free sandwich lunch, fruit and coffee will be provided.

We started the term with a welcome event . It was a fun and relaxed event with lots of free wine! The event took place straight after a reading and conversation with the Polish-Ukrainian writer Żanna Słoniowska and her translator Antonia Lloyd-Jones. Here are some photos of the event!

1. Interdisciplinary conference 'Play, Recreation, and Experimentation: Literature and the Arts since the Early Modern Times'
8-9 Dec 2017, Canterbury Cathedral Lodge, Canterbury
Hosted by the Centre for Modern European Literature (CMEL) at the University of Kent, with the generous support of CMEL, the MHRA conference award, and the British Comparative Literature Association (BCLA).
Registration: £25, by 23 Nov 2017 (spaces limited, early registration encouraged);

This interdisciplinary conference aims to explore relations between play, recreation, and experimentation by examining their articulations in literature and the arts (broadly understood as the visual arts, architecture, music/sound art, film) from the early modern period to the present day. There are many instances of engagement with the ludic and experimentation, e.g. early modern literature on the theme of playing with appearances (being and seeming); Duchamp’s Fontaine; Dada and Surrealist practices including cadavre exquis, collage, bricolage; Oulipo and pataphysics; postmodern pastiches and hybridity in architecture, and re-inventions of myth and history in contemporary fiction. Nevertheless, we intend to shed new light on these works and probe their implications for a theory of the ludic through considering the interactions and dialogues between play, recreation, and experimentation. The broad chronological and disciplinary scope is meant to accommodate to the comparative and intermedial perspective that this topic involves.
We are pleased to present an exciting conference programme with a diverse range of topics. Please see our blog page for details about the papers and to register here.

If you have any questions, please email Dr Xiaofan Amy Li <x.li-219@kent.ac.uk>

We are delighted to welcome Professor Rosinka Chaudhuri, who is joining us as a Mellon Visiting Professor for this term and part of next. She is here under the auspices of the TORCH Global South visiting scheme. We invite you to join Professor Chaudhuri for this workshop discussing world literature. Each speaker will give a short statement outlining her or his take on this particular debate, though the main purpose of the workshop is to provide a forum for students and colleagues to contribute to a wider discussion about world literature today. Professor Chaudhuri is very happy for students working in her fields of expertise (see details on the English Faculty website) to get in touch. She can be reached at rosinkac@gmail.com.

Roy Pascal - the 1977 Bithell Memorial Lecturer - was one of the most influential Germanists in Britain. At the height of the Cold war, in 1950, he wrote the foreword to Studies in European Realism (1950), Georg Lukács’s first book to be published in English translation, and challenged the view that ‘the East’ did not belong to a Europe conceived as ‘the West’.
Helmut Peitsch will begin by tracing the influence of Lukács in Pascal’s own work on German history, in particular The Growth of Modern Germany(1946) which, a year later, appeared in translation in the Soviet Zone of Occupation. He will then move on to discuss Lukács’s ‘European realism’ in Pascal’s later writing such as The German Novel (1956) and From Naturalism to Expressionism (1973).
Helmut Peitsch is Emeritus Professor of German at the University of Potsdam. Having held Lectureships and Leeds and Swansea and a Professorship in Cardiff, he is an expert on the history of German Studies in the UK. The wide range of his research interests is reflected in his recent monographs: „No Politics“? Die Geschichte des deutschen PEN-Zentrums in London 1933-2002 (2006); Nachkriegsliteratur 1945-1989 (2009); Georg Forster: Deutsche ‚Antheilnahme‘ an der europäischen Expansion über die Welt (2017).

It is tempting to say that buffalo always existed, that lying is an indispensable part of politics and life, and that there is nothing new under the sun. Indeed, it is tempting to cut short by saying that the point is to watch what one reads as well what one eats and drinks. However, post-truth is a philosophically relevant concept and its emergence is an essential feature of the contemporary world: the alliance between the very modern power of the web and the oldest human desire - the wish to be right at all costs.

The event is generously supported by the Camões Centre, King’s College, London
Attendance is free but places are limited so please book now to reserve your place here

5. The third Northern Comparative Literature Network symposium, ‘Of Borders and Ecologies: Comparative Literature and the Environment’, will be held on 28th October 2017 at the School of English, Birmingham City University. The symposium will bring together scholars working on questions of the Environment and its representation in Comparative and World Literature.
The day will begin with a keynote paper from Professor Paul March-Russell from the University of Kent, and will continue with a variety of papers delivered by scholars from Universities across the north of the UK, the Midlands, and Ireland. We look forward to what promises to be a fascinating and intellectually stimulating day.

Attendance at the conference is free, but places are limited. To register your attendance, please contact our communications co-ordinator, Jade Douglas at jl10jmd@leeds.ac.uk, stating your name, affiliation and position (MA, PhD, ECR etc.)

While the domestication of cultural references is often seen as crucial in theatre translation, pursuing efficacy in speeches is just as important: the translator needs to have an ear for the potential performance of the text and its ‘speakability’. The demands of the stage tend to cut short the ethical debates on the positioning of translation between source and target text, and justify the choice for adaptation rather than translation. Over the past decades, translators and critics have defended the need to test translations on the stage, and the cooperation between the different agents of the theatrical project – in other words, the interdependence between translation, adaptation and interpretation. Collaborative translation benefits the actor by alleviating their verbal obstacles (Johnston 2004), and the director by assisting them in the interpretation of the text, as well as its reception, favouring the clarity and credibility of the text (Peghinelli 2012).

Sometimes collaborative translation also benefits the translators themselves, as it elevates their subaltern status and gives them visibility (Fernandes 2010); or benefits the source text, as it helps to retain the effects produced by the original (Zatlin 2005). This practice also benefits theatre translation as a discipline, as it can open up several avenues of research. For example, because the idiom generally aspires to embrace the target culture’s sociolect in a given time and to be as efficient as possible, studying the history of all available translations prepared for performance of a particular play could bring some insights into the evolution of language usage and the norms of theatrical efficacy. Just as the practice and the study of stage-oriented translations have entailed the emergence of theatre anthropology as an almost autonomous area of research, such historical study has the potential to open up to theatre sociolinguistics as a new subfield of the discipline.

While case studies are welcome, we will favour proposals that particularly contribute to the theoretical reflection on collaborative translation. Papers should not exceed 20 minutes and suggested themes are as follows (although this list is not prescriptive):

Please send your abstract or any questions to cedric.ploix@st-hughs.ox.ac.uk by 1st November 2017. The committee will review the abstracts in the following week.

The study day will take place after a three-day practical workshop run by director, actor and translator Catherine Hargreaves, professor at ENSATT, France. Speakers are invited to register for the workshop in addition to the symposium if they wish (see description below).
The symposium will end with an open workshop in which speakers will be given the opportunity to join for free or to attend (knowledge of French not essential for this workshop), followed by a round table.

The workshop will explore the relationship between language and acting. How can the use of different languages influence an actor's presence, develop his practical skills and sensitivities and modify meaning? What happens on stage when a same scene is played in different languages? Or in several languages at the same time?

After a series of exercises, designed to reveal how the rhythm and sound of a given language carry the history and cultural background of a society, the participants (theatre practitioners and literature students) will work on performing English and French versions of the same scenes and on improvisations linked to multilingual devised theatre. Time will be spent on analyzing the different performances and figuring out together if the stage can and/or should influence the translation of a play. The authors and translators of the plays will be invited to join the workshop.

The scenes will be taken from English and French contemporary plays. Knowledge of French is required to participate, but no theatre experience is required.

Lunches will be provided.

7. Common Scents: Smells and Social Life in European Literature (1880-1939)
A conference at the Institute of Modern Languages Research, University of London, London,
Thursday, 22 and Friday, 23 November 2018

Olfactory motifs are important devices of emotional communication, and a sense of  community or social boundaries is often evoked or enforced by smells; under the title ‘Common Scents’, Janice Carlisle has explored the social coding of smells in Victorian novels of the 1860s.  However, the ways in which European literature after 1880 has employed smell motifs to give significance to social life have remained underexplored. European literature around 1880 marks a shift of interest from smells as properties of shareable facts to complex modes of olfactory experience; at the same time, Naturalism’s rehabilitation of factual odours and Symbolism’s rediscovery of evocative smells result in an ‘olfactory explosion’ in literature (Hans J. Rindisbacher). The conference takes stock of innovative uses of smell motifs in literary explorations of social life during the time-span from the ‘olfactory explosion’ at the turn of the nineteenth into the twentieth century until 1939, when the inter-war literary scenes of both, Modernists and Modern Realists, were broken up by death, emigration, and a new World War.

Topics of interests may include (but are by no means restricted to):

Please send your abstract for a paper of 25 minutes length to all three conference organisers by 8 January 2018. 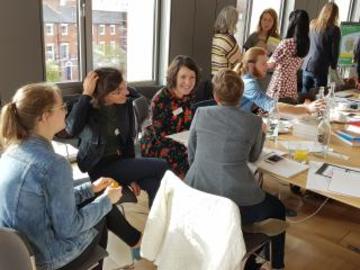